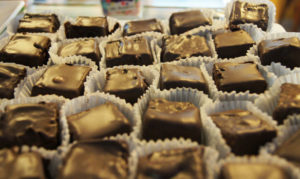 Whether you prefer to start with the beef carpaccio crostini with tapenade and truffle vinaigrette at Okra, or love to tear into that perfectly succulent rare steak at CafÃ© Flo, or decide to indulge with warm crispy wontons filled with milk chocolate at Fuschia, gourmet chefs and restaurateurs in Pakistan’s urban centres are now noticing a greater awareness of and appetite for fresh foods and out-of-the box dishes. Alongside, there is a growing market for organic among foodies.

Florence Villiers gave Karachi CafÃ© Flo — an authentic French bistro — in 1998 and a fine-food-craved populace welcomed her with open arms. Creamy, scrumptious, delicately preserved recipes passed down from generation to generation were carefully unravelled in a tiny kitchen in Karachi, thousands of miles from France. “Food in my family is religion,” says Florence. “My son used to say to me, ‘Mama, you run your restaurant like your own house,’ but I say I want my customers to be happy. CafÃ© Flo is my life.” After more than a decade of catering to loyal gourmands and friends, Florence says she has seen a huge change in tastes recently — “they prefer light foods and organic ingredients.” CafÃ© Flo has an organic vegetable supplier in Malir now. With bon vivants now increasingly fussy about the source of their ingredients, vegetables including carrots and salads are all transported from Malir. However, French products are still imported from Florence’s home country to maintain a consistent quality. In Pakistan food always comes first, exclaims Florence. “Take the Chinese restaurant on Tariq Road, Yuan Tung, for example. The dÃ©cor is atrocious, but they serve excellent food.”

Humera, designer and manager of Aylanto and Fuschia, an authentic Thai eatery, says, “Customers are becoming more conscious about what’s on their plate. Where going out was more of an occasion in the past, nowadays, with working couples and time constraints, dining out has become a matter of convenience.” So experimentation with food is increasingly a trend and an art adopted by many restaurants, including Humera’s, to cater to an ever-increasing food-literate customer. “At times we take daring steps and introduce new items. We make it a point to remain in touch with the trends in the food industry on an international level.”

There is someone though who sniffed out the organic food trend before anyone else and has committed herself to providing just that. CafÃ© Necos is the very first wholly organic restaurant in Pakistan. Its glutinous breakfast goes something like this: buckwheat bagel with cottage cream cheese, whole wheat pancakes or French toast with a dollop of thick honey on top, or caramelised banana scallops with whipped cream — and you can have it all without worrying about shedding those stubborn calories in the course of the day.

Nilofer Saeed, owner and manager of Necos, believes that while fresh foods are in demand, organic food is still a concept that is being introduced. Having worked with her family’s chain of restaurants, Copper Kettle and Hob Nob bakery, Nilofer is undoubtedly a trendsetter and her new project’s rustic interior reflects its organic flavour. However, even alongside film stars, TV personalities, models and middle-aged couples throng the tiny cafÃ©, the market is still limited to the upper tier of Pakistan and sourcing organic food is a problem, says Nilofer. “The original idea was not to run a cafÃ©, but an organic shop, which would have a loyal clientele,” exclaims the food connoisseur. Certainly Necos shop stocks everything from organic frozen goods, oils, salt, sauces to a line of baked items, which include sugar-free cookies and whole-wheat pasta. But as the idea grew, Necos cafÃ© took shape.

And for restaurateurs with increasingly persnickety customers but who also have a determination to preserve that delectable delight in their menu, there is someone who can catapult them to success. Slow pot-roasted lamb with aromatic mint leaf gravy is the new receipe that CafÃ© Flo’s guests absolutely love, and Shamira is the architect of that simple gastronomical delight. She is a highly regarded food consultant in Karachi who has her own catering business and her rÃ©sume is filled with the best restaurants where she has tweaked menus, conjured up mouth-watering dishes and trained chefs. Shamira’s role is much like Gordon Ramsey’s in “Kitchen Nightmares” — but without Ramsey’s temper of course. She is a self-professed, diehard foodie with invaluable experience from her sojourn in Africa and has trained with the French Culinary Institute and the Institute of Culinary Education in New York City. She has also recognised the trend towards healthy eating and says, “Food appeals to all the five senses and people are increasingly getting into fine foods.” Shamira, however, feels that lighter gourmet dishes have a mass appeal and should be available to all. “If the masses can relate to McDonalds, they can relate to simple recipes. Capers, parsley, almonds and spices are all available locally. Hence it’s all about creativity, not foie gras or goat’s cheese.” She recommends Roadside CafÃ©, a hidden treasure for those looking for a “no-fuss” good eatery. According to her a good gourmet sandwich and tea place is still badly needed in Karachi.

So what does this mean for the Pakistani palate? As Pakistanis grow “food-literate” the demand for specialised food spikes and that is where the blossoming catering business comes in. Aman Virji, the “scientist” of Room Service, says that in light of the recent political turmoil, people increasingly prefer to order in. Educated in hospitality, at the Swiss Hotel Management School, Virji dabbled with “big” restaurants before venturing out on his own. He says the idea to start a catering business came to him after Benazir Bhutto’s assassination, when the city shut down for a week. Growing his own herbs in his aunt’s house, Virji too uses only organic cream, butter, olive oil and fresh ingredients. Other popular catering concerns include Orient Express, Chairman Mao and Simple Dimple — but the latest craze in the catering business are cupcakes!

Size zero may be banned on the catwalk in Madrid and Milan, but Pakistan’s crÃ¨me de la crÃ¨me are still trying to get into their body-hugging Missoni dresses. In a bid to acquire those gaunt cheekbones and miniscule waistlines, the trend of healthy eating and fresh food is fast catching on. But with travel and exposure, our sophisticated palates also demand the very best fine-dining experience and it seems a whole new breed of chefs and entrepreneurs in Karachi are committed to just that.