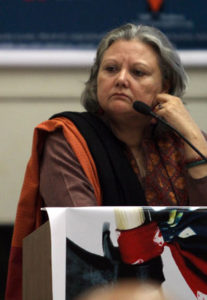 “No Honour in Killing: Making Visible Buried Truth,” a show intended to raise social awareness through art, was initiated as a project in 2008, soon after the Naseerabad ‘honour’ killings made the headlines. According to its curator Niilofur Farrukh, it began as an attempt to fight the helplessness that had gripped society when news of the murders broke.

Dedicated to the four women who were buried alive in Naseerabad, the exhibition, which went on display at the VM Gallery last month, showcases the work of 35 artists — some very well known, others young and upcoming — with each work exploring a different dimension of violence against women.

‘Honour’ by Khuda Bux Abro features moustaches floating around a burqa-clad woman. Men who brandish these moustaches — which are viewed as a source of pride and honour in society — think nothing of laying to waste a woman’s life in the name of honour. The painting depicts the entrapment of women by such men and their code of honour.

In Naima Dadabhoy’s work, a screen print on canvas, the map of Pakistan placed at the centre of the canvas, is surrounded by text that documents facts, figures and perceptions relating to ‘honour’ killings. More impressive, however, is Dadabhoy’s life-size skeletal structure of a woman resembling a mummy lying on the floor in wrought iron and tin foil — much like a corpse in a coffin.

Maham Mujtaba depicts the debasement of the concept of honour by draping a wild boar in her painting with a red sheet that has the word ‘honour’ embroidered on it. The background shows 18 women wrapped in white sheets — all victims of ‘honour’ killings.

What look like two double-sided axes strung on the wall are the product of a collaborative effort by Abdullah Syed, an artist based in Sydney, and Roohi Ahmed, currently a teacher at the Indus Valley School of Art and Architecture. Titled ‘Kullah-Re,’ on one side of the wooden stick is the metal component of an axe whereas on the other is a kullah (form of turban) made of fabric. Together, they denote the perpetrator of violence and the tool he uses to perpetrate it — the tribal lord and the axe.

Covering most of the wall space on one side of the gallery, Marium Agha’s ‘72 virgins for my suicide lover,’ references the promise of 72 virgins to all martyrs in a Hadith in an unusually interesting manner. Instead of using figurines, Agha uses biological sketches of the vagina to illustrate the reduction of women to mere objects, offered as reward in heaven — and on earth.

Strikingly different is Maria Aftab’s work in mixed media. Done in bright red fabric with a checkered rug on the floor and a floral design on the wall, Aftab’s bathroom scene and fittings — a sink and a mirror with a towel rack next to it — according to her represent “items of daily use … which usually provide comfort yet simultaneously give the effect of a nightmare.”

On a more positive note, Sana Arjumand uses a portrait of a woman wearing a crown to depict Mukhtaran Mai. It is her way of paying tribute to a woman who was the victim of a heinous crime — gang-rape — but stood strong in the face of slander, threat and coercion and came out of the trauma as a stronger and better person — a role model for victims of similar tragedy.

“At some level or the other, art communicates — sometimes directly and at other times, not so much,” remarked Farrukh of the show. According to her, the aim of the exhibition was to dispel the widely held notion “that art is merely an elitist activity and expresses itself in an esoteric idiom.” In her address at the two-hour discussion/dialogue prior to the exhibition’s inauguration in Karachi on December 6, Farrukh stated that the initiative aimed to do three things: take the exhibition to different parts of the country, include the work of local artists and initiate a dialogue.

While the exhibition could not travel to several cities listed on the scheduled programme due to the worsening law-and-order situation in the country, it made it to Jamshoro, Khairpur, Islamabad, Lahore and finally Karachi. Similar discussions as the one in Karachi were held at these locations. Most of the students, particularly those in Jamshoro and Khairpur, were well aware of the crimes committed in the name of honour and the perceptions that existed in their respective societies. Not only were they very forthcoming in their discussions, but also contributed to the exhibition — selected works were added to the core exhibition.

At the event in Karachi, after the screening of Beena Sarwar’s nine-minute award-winning documentary Mukhtaran Mai: A Struggle for Justice, several speakers addressed the audience. Khadija from Shirkat Gah, one of the researchers who travelled to Naseerabad on a fact-finding mission, presented an overview of the widely practiced — and accepted — cultural practices in Naseerabad and its five adjoining districts. She said watta-satta, siyakari and karo-kari were rampant in the areas. Women were killed in the name of family honour — even on the pretext of leaving home unaccompanied or without the permission of a male member — and commonly used as barter for hefty sums of money

Amar Sindhu, an activist from Hyderabad, added to the discussion by informing the audience that the notion that the jirga system provides “cheap and easy justice,” did not hold true. As much as 1 crore 16 lakh rupees has been given as compensation money to settle disputes. ‘Honour’ crimes, said Sindhu, had become part of the country’s political economy, with feudal lords — some of whom are sitting in the assemblies — getting a percentage of the compensation money. Sindhu added that the perpetration of these crimes against women in particular was due to a lack of female representation in the jirgas. She gave the example of a female politician from Sindh, who despite being an elected representative of the area, was not allowed to intervene while an all-male jirga was in session. And despite the Sindh High Court’s ban on jirgas in 2004, they still operate, with ‘honour’ killings rising with each passing year.

Poet and activist, Attiya Dawood recited her poem, ‘To My Daughter,’ originally written in Sindhi but translated into Urdu, with “pyaar zaroor kerna” being the constant refrain. The floor was then thrown open to the audiences and a lively discussion ensued. One member suggested that events such as these should be held in areas where these crimes are perpetuated instead of urban centres. A female in the audience countered by saying that while women may not be killed as blatantly as they are in rural societies, the concept of family honour is linked to women even in the urban areas.

Moreover, members in the audience pointed out that it was people based in the urban centres who could effect change by approaching the relevant people and authorities, and further through their activism and agitation. The powerful and the influential needed to be converted, for even if they were not sanctioning the crimes directly, they were on occasion guilty of abetting the act. And some anti-women laws needed to be changed, as was pointed out by WAF (Women’s Action Forum) member Nuzhat Kidvai, and other laws in favour of women needed to be implemented.

All in all, the exhibition-cum-discussion managed to strike the right chord in most hearts.

Click on any photo to begin the slide show.