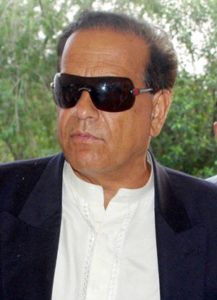 “He went as he would have chosen — in a blaze of glory. Larger than life as he was, I can’t imagine him allowing either age or infirmity to fell him. That was just not his style,” said a lifelong friend of Salmaan Taseer’s moments after the latter’s brutal assassination.

Perhaps it was that very expansiveness, coupled with his absolute resolve to live only on his own terms — and if in your face, so be it — that made the Punjab governor an inevitable target of attack and simultaneously, a national icon. It was also because of his higher than most profile that his death sent shockwaves across a country quite accustomed to, and almost blasÃ© about even the most foul of murders.

It is fitting that like his acclaimed political mentor, Zulfikar Ali Bhutto, Taseer died as he had lived, unafraid and apologetic. Sadly, the cause he espoused and the one he was murdered for, found, apart from Sherry Rehman, few champions in the party he so loyally served to the end.

Threatened by Pakistan’s extremist lobby for his support of a poor Christian woman accused — erroneously he believed — of blasphemy, Salmaan Taseer refused to renege on the stand he had taken, even when the luminaries of the PPP distanced themselves from it. Tweeted the gov’ just hours before his death, “I was under huge pressure 2 cow down b4 rightist pressure on blasphemy. Refused. Even if I’m the last man standing.” Given the lack of support for his position, the words were chillingly portentous.

While there are few takers for his stand on the blasphemy issue save a few lone voices of civil society, laments over his death and tributes by friends, grudging admiration by foes and awe by a new generation who got to know Taseer through his sometimes self-deprecating, sometimes acerbic, but omnipresent humour, now fill the pages of newspapers and magazines and internet sites.

However, equal editorial and blog space is taken by those who pitted themselves against Taseer and his crusade for justice for Aasiya Bibi. As much as Taseer’s murder, these are chilling reminders of Pakistan’s creeping obscurantism — and the violence they spawn.

Salmaan Taseer’s detractors may vilify him for his “libertine“ lifestyle and his “secular” ideology. Be that as it may, who can dispute his credentials as a Renaissance man, who used the gubernatorial platform to promote the arts, to foster culture, to advance technology in his beloved Punjab, and to stand up and be counted in Pakistan’s fight for a place in the comity of civilised nations?

A resoundingly successful entrepreneur and man of the world, who at 66, had seen and done it all, Taseer remained, amazingly, steadfastly, a Pureheart when it came to country. Perhaps he inherited his idealism from his father, Dr M.D. Taseer, a poet, writer, and one of the founders of the Progressive Writers Movement, and his English left-wing mother Christabel, who left her country to follow her heart and settle in Pakistan when she married his father. Or maybe it was his maternal aunt’s husband Faiz Ahmed Faiz, who inspired him with his stirring verse. Certainly he was struck in large measure by Z.A. Bhutto, who was making a mark in the country’s political firmament and stirring the imagination of a generation. Taseer joined the PPP in its infancy and was soon one of its shining stars.

In between, however, Taseer had other pursuits that propelled him. In pursuit of a higher education and career, a young Taseer headed West, to England. From there, he moved to Dubai, where he set up a chartered accountancy firm, concurrently running another in Pakistan, that established him as an unqualified success in his field.

Subsequently back in Pakistan, Taseer rejoined politics with newfound vigour. However, after Bhutto’s assassination, and with the PPP’s fortunes on the retrograde, he was imprisoned by the Zia-ul-Haq administration and subjected to long periods of solitary confinement and torture.

Emerging from jail with renewed commitment, Taseer once again pledged his loyalty to another Bhutto, and fought the elections on a party ticket awarded to him by Benazir. He won a seat to the Punjab Assembly in 1988, but lost the next three elections in 1990, 1993 and 1997, each time by a narrow margin — and a magnate was born.

Taseer spent the next 10 years focusing on building a business empire with tentacles reaching beyond international borders, and which included the financial service sector, IT, the media, construction, etc. Each foray proved more successful than the last.

In 2007 he was lured by General Musharraf during Mohammadmian Soomro’s interim government to become federal minister of Commerce and Industry. In 2008 he was appointed Governor of the Punjab and retained that position when the PPP assumed power at the helm.

Throughout his tenure, Taseer’s relationship with the Sharifs remained tense and a war of words ensued between the two that ranged from the sublime to the ridiculous. With an unblemished record vis-Ã -vis economic transactions himself, Taseer lost no opportunity to attack his Sharif nemeses over their alleged corruption. On learning the powerful industrialist clan was paying merely 5,000 rupees in taxes (Taseer himself was one of the 10 highest taxpayers in the Punjab), he suggested they “apply to the Benazir Income Support Programme for funds,” given their straitened financial circumstances. There were endless quips of this nature.

Not everyone was amused. Ultimately, Taseer’s obdurate refusal to fall in line with the creeping extremism in the country — or to pretend that he ever would — and his propensity for shooting from the hip, made his slaying by a member of the extremist forces he so vehemently opposed, a virtual inevitability.

With Taseer’s death, Pakistan’s political landscape has lost much of its colour, and the country’s crumbling bastions of progressive thought are all the shakier.

This article is from the January 2011 issue of Newsline.