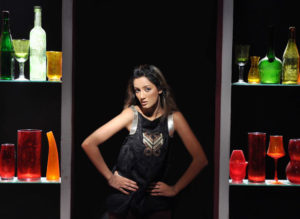 Making my way through a maze of courtyards and parking lots, I stopped to ask a security guard for directions. “Mathira bibi’s office? Of course I know where it is! I know her, she’s really nice!” he smiled, while escorting me there.

Yes, Mathira is that girl on Vibe TV famous for, among other things, admonishing an offensive male caller on her late-night show for saying that crude thing he said. From what little we know of her, courtesy her on-screen presence, we’ve drawn one basic conclusion: with her outrageously out-there physique, which she does little to camouflage, vivacious attitude, and a charming (read: suggestive) way of expressing herself, Mathira is Pakistani entertainment’s favourite ‘bad girl’ who challenges conventional mindsets with no hesitation.

As I walked into her office, I expected to meet a boisterous bombshell sporting lots of make-up and attitude; you know, the one we see on late-night TV in her low-cut blouses and high-riding hemlines where she flirts, poses, makes cutesy noises and excites her viewers. To my surprise, Mathira was quite the opposite: sweet, sober, and dressed down — far from the gossip mills’ favourite sex symbol. “Ask me anything you like,” she smiled. “I’ll tell you whatever you want to know.” And that’s how the interview started.

The child of an African father and Pakistani mother, Mathira, whose name means ‘pretty woman’ in Hebrew, was born and has lived in Zimbabwe for most of her 18-year-old life (yes, she’s that young!). She describes her life there as “very different” from her life in Pakistan. “In Zimbabwe, I was a free bird with wings. I was a very carefree kid and used to do stupid stuff,” she says. A bonafide tomboy whose posse consisted only of male friends, Mathira admits that she was never very good at school and always took a keener interest in sports. “I always won trophies for hurdles and relays, but I remember the first time I won something for English, my mom was really proud of me. I hated wearing ties and skirts and was really nervous about going on stage. When I climbed up to receive the trophy, I tripped and fell: it was so embarrassing! Anyway, I got up and received it, and on my way down, I tripped again and broke the trophy! Since that day, my mom never lets me forget how clumsy I am,” she laughs.

Nearly four years ago, due to political instability in Zimbabwe, Mathira moved to Pakistan with her mother and sister, where she was immediately spotted by Vibe TV channel producer Babar Tajammul, who signed her up for a morning yoga programme. “I never planned a career in the media. I had hoped to one day become a psychologist or a gynaecologist. But I met Mr Tajammul, and since I’m a yogi — I learnt yoga when I was only six years old — we decided to do a yoga programme.”

Eventually that show led to her own talk show called “Love Indicator.” Mathira truly seems to enjoy her career, although she is well aware of her critics. “I don’t know why people like to talk so much rubbish. I do feel bad, but then I laugh like hell. The worst part about my career is that they love putting a tag on me. They don’t see who I am, or my background. They just say ‘she’s a bad girl.’” But “bad” as she may be, Mathira has a vision for a more open-minded Pakistan. “To be honest, Pakistan is frustrated. I believe we need to open our minds and we need people who will be a little bit of both — western and eastern. I’m not a proper Muslim as I’ve got a hundred sins on my head. But at least I don’t pretend to be a good Muslim when I’m really not.” When asked about how Pakistan has responded to her approach, she says, “I have managed to change some mindsets. People do hate me, they swear, they throw jootas at their TV, but they continue to watch me. The next day they tune in again to see what I’m wearing or what I’ll do on the show! This is Pakistan, you know. Agar aap ka naam hai, tau aap badnaam bhi hain. Our catwalk models as well as actresses wear bikinis and innocently get away with it. When our girls go abroad, they are the first ones to buy miniskirts. So I don’t believe that I need to change my wardrobe and myself for Pakistan. If Pakistan wants me, it should accept me.”

A girl so confident is bound to have a strong role model who she idolises and patterns her life after. Madonna perhaps? Marilyn Monroe? Britney Spears? “No, I don’t have an idol,” she says. “Every morning I wake up and see myself in the mirror. That’s the girl I look up to. I believe that no one learns anything from anyone. When life gives you a beating — that’s when you learn.”

For a girl this secure and confident, it is hard to imagine that she is essentially a softie at heart who has little room for anger and hate. “I actually don’t like that I don’t know how to be angry at anyone… I will end up crying, but I won’t get angry at them,” she says. The famous “gujji gujji” girl also has a soft spot for animals. “I take home any injured cat or dog I find on the road, although my mom hates it. ‘Gujji gujji’ is baby language which I lovingly use on my cats. I used it once on my show and people found it so funny, they keep requesting me to do it now! Some people find it chichora, some people say it’s rude, but I think it’s really cute.”

And paradoxically, for all her public persona, in a sense, Mathira is a bit of a recluse. Much of her free time is spent by herself, shopping with her mom, or in her office planning things for her show. “I used to have a great social life before all of this, but I’ve toned it down now because anywhere I sit, people make up ten stories about me. The world doesn’t know that I’m very quiet and although I’m like an open book, I’m also a very closed book. Nobody knows how deep an ocean is, and no one knows the real me. A few people have attempted to delve into the real Mathira, but they got lost somewhere along the way. So I’m not just that bubbly girl you see on TV — I have two personalities.”

Real and practical, she doesn’t live in naÃ¯vetÃ©: “People shouldn’t look up to me. Most of the girls that really like me are not very educated and are obsessed with boy issues. Girls from the upper classes also like me, but simultaneously love trashing me… I don’t think anything of it, though. I’m just living my life.” 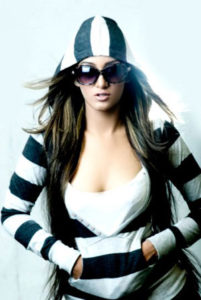 Single and self-professedly in love with herself, Mathira feels no pressure to get married or even be in a relationship for now. Half jokingly, she says “I will only get married to a guy who pampers me like hell, otherwise he can buzz off!”

Very candid in her manner, she admits that despite being a host for a football show, she doesn’t support a particular team, just the winning one. And surprisingly, she has a very unique and optimistic approach towards Pakistani politics. “I’m a huge supporter of Zardari. He’s a nice guy, we just have a habit of highlighting the bad stuff. He is our president right now and I believe even if there is something bad about him, we should learn to cover it up. If we don’t respect our own president, do you think others will?”

As to her plans for the future, she says, “Pakistan has given me a name, so yes, I’m going to be staying on here. I plan to follow the typical acting and modelling route in the future, but I haven’t even begun a show of hands in Pakistan yet. For that, they will have to wait and see,” she says mysteriously with a twinkle in her eye. “My motto in life is ‘Believe in yourself.’ The day you stop believing, that’s the end of you. I believe a person is like a rose. When it blooms, it’s attractive and people like it a lot. But when it dies, some people will keep you as a memory in their book. So you should look bright even if you’re dead from the inside. You don’t need to show your deadness to the world, because trust me, no one’s interested.”