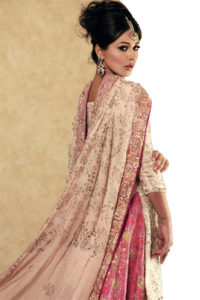 I first saw Ayyan briefly on set, modelling for designers Umbereen and Sharmeen’s bridal range in Karachi. She immediately caught my attention. Apart from her striking good looks and bod to match, Ayyan’s effervescence was hard to miss. She hummed Bollywood tunes as she strutted around the set, posing for effect and disarming the young volunteers present with her chatter. As she talked incessantly while changing, even the camera crew from Style 360 could not remain immune to Ayyan’s playful banter.

Almost a year later I set out to interview the 18-year-old brunette, who in just two years had spiralled to the very top. Scheduled to meet over a cup of coffee, I was determined to discover the real ‘Ayyan’ — the girl behind the near-perfect exterior and make-up.

Ayyan waltzed into Espresso an hour-and-a-half late, hugged me, sat casually at the table, and ordered a cafÃ© latte — like she’d known me for years. Midway through our conversation she candidly confessed that she had been trying to dodge the interview but “you sounded soooo very sweet on the phone, that I decided to show up!” Dressed in jeans and a tiny T-shirt, the leggy model had several eyes pinned on her as she smiled at me, seeming blissfully unaware of all the attention.

Ayyan describes herself as always satisfied, trustworthy, happy and faithful — and her happy-go-lucky personality certainly corresponds with her self-assessment. A peppy teenager, Ayyan is hyper, bubbly and ends every conversation with an exaggerated “mwwaaaah.” That notwithstanding, Ayyan maintains that she is also a consummate professional. She claims that she may be sleeping all day, but when a call comes in asking her to arrive for a fashion shoot, she is up and ready in a flash. Her claims are certainly buttressed by her portfolio.

Pakistan’s newest supermodel has made fashionistas, fashion magazine editors, top-designers and even veteran models sit up and take notice. She adorns covers of numerous magazines, has walked the ramp with the likes of Nadia Hussain and Vaneeza Ahmed, and has modelled for the “big boys” of fashion — all before she turned 18. She was chosen for nationwide commercials like Ufone and McDonalds, and proudly shows me her Facebook fan page, which is nearly at its 1,000-member mark.

And with numerous advertisements, commercials and cover shoots for prestigious magazines, and having recently been crowned Calvin Klein Beauty of the Year as well as brand ambassador for their perfume, Ayyan feels her hard work has paid off. Then there was the Lux Style Award nomination for Best Emerging Talent 2010. “I never got into this profession for the money,” says Ayyan, and then adds with a devious smile, “Don’t get me wrong — I make lots of money, but then I go and spend double of that!”

According to the modelling industry’s beautiful young ingÃ©nue, the fashion world is not a difficult place as long as you maintain professional etiquette. But “fame is bound to get to your head if you don’t have your feet firmly on the ground.” Ayyan knows of models that are rude to behind-the-curtain volunteers and elbow the younger models out of their way — but not her. In fact, Ayyan coaches the younger ones on their stride down the catwalk. And what about the endless stories of the casting couch and corruption in the industry? Ayyan believes everything is in the eyes. She leans over to me and whispers, “your eyes are clean and innocent, I can tell, but you see the man on that side, his eyes are corrupt.” Clearly, the young model trusts her instincts and follows her gut.

Gregarious as she is, Ayyan refuses to disclose too much about her family. A magazine editor called Ayyan a “Disney princess,” and she says her 11-year-old brother took a lot of pride in that. “My mother is my best friend, and I tell her everything at the end of the day. She doesn’t sleep until I am home,” divulges Ayyan. More than that she is not telling. Reports of her having lived in Dubai and Lahore, of connections with X, Y or Z, are steadfastly circumvented.

In a world of glitz and glamour, there are unfamiliar faces, gritty competition, and late nights, but the 18-year-old takes everything in her stride: “I have learnt not to take things to heart. I have already done more classy and memorable work in just two years than most people do in six or seven years. After five years I will be known internationally and everybody should be proud of me.”

As we left Espresso, immersed in conversation, Ayyan nonchalantly turned around and exclaimed, “Come, come, let’s go some place else for coffee now, it’ll be fun!”