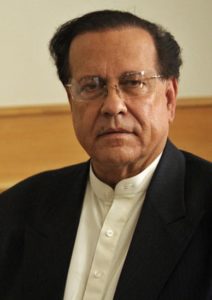 Victim # 1 for 2011 — Salmaan Taseer, Governor Punjab. That is how the tally of victims of religious extremism in Pakistan would read when history is written. And just a few days before this PPP stalwart was gunned down in Islamabad by his own security guard, he had said, “And what would be the state of this country if the governor of Punjab were to be bumped off?”

That is the question that every thinking Pakistani was asking last Tuesday. It is too early to give an answer. But it is not difficult to analyse the factors that led to this horrendous deed. For Taseer was undoubtedly controversial in his politics but there was no ambiguity in his stance on the Blasphemy Law debate. He had declared Section 295-C of the PPC to be a black law and defended Aasiya Bibi, the latest victim of the law. He visited her in prison as a demonstration of his support for her. That proved to be the last straw.

The killing shocked the nation. But it did not surprise. Nothing could have been more expected if one were to cast a glance at the scenario in Pakistan’s politics, society and economy today.

On one side is a growing force that uses religion for its politics and resorts to violence and terror as its strategy. It is an amorphous force that combines variegated elements of every stripe ranging from the Tehreek-i-Taliban to Lashkar-i-Taiba. They operate under the banner of Islam and have made human life cheap as thousands are blown up by their suicide bombers or beheaded by their fighters. In a brutalised society, it becomes a part of the deadly game if some of the casualties are a result of attacks by American drones and, what in military parlance goes under the term, “friendly fire.” Violent death has become the norm. Figures compiled from newspaper reports estimate that in 2003-2010 nearly 32,655 people — including civilians, men in uniform and insurgents — have become victims of terrorism in Pakistan.

In the backdrop is a dithering government teetering on the brink that cannot perform, is ineffective and has no grip on the law and order situation. Lacking a majority in parliament, it has had to depend on the goodwill of other parties to remain in office. This has given a field day to the militants as they have nothing to fear. While the Pakistan Army battles with them in FATA, their violence in the towns and cities goes unchecked because few are arrested and fewer still are punished.

This violence is taking place against the backdrop of growing religiosity and an extremist mindset. To the oppressed masses and also the educated elites on the fringes of power — both of whom lack control over their destiny in varying degrees — religion offers the only panacea to life’s ever-growing problems. And insecurity is not the only issue. There is the challenge of finding jobs, educating their children, obtaining treatment for the sick, and the multifarious challenges of civic life that are taken for granted elsewhere. In this destabilised environment it is so easy for a youth to get radicalised. What is worrying is that one can never know how a person will react in a situation. It is something like a mental illness when the patient becomes unpredictable. Taseer’s killer fits the bill. He was described by his neighbours as ‘gentle and tolerant’!

If there is a landmark event which could be identified as the starting point of this horrendous phenomenon, it would be the army’s takeover of July 5, 1977. The third military coup in Pakistan staged by General Zia-ul-Haq, who adopted a deadly strategy of using religion for politics and foreign policy, spelt the beginning of the end.

This marked the introduction of religion in a big way in every walk of life in Pakistan, especially in politics, by enabling the discredited religious parties to gain respectability by entering the corridors of power. The country lurched towards religious extremism, intolerance and militancy. A section of the electronic media empowered with its newfound freedom, reinforced this mindset creating a huge pool of religiosity and myopic thinking. From this were drawn the fighters that the government used freely to promote its foreign policy objectives without realising how this would prove to be a double-edged sword.

The Blasphemy Law, as it is called, is a creation of the period of General Zia-ul-Haq’s rule. Although in the penal code since the days of the British, these rules were changed in the eighties to introduce the death penalty. This draconian provision made the law prone to abuse as is happening now. A law that was supposedly designed to deter blasphemy actually led to a rise in the number of cases reported. Between 1927 and 1986 (when the new law became effective), only 10 cases of blasphemy were reported. In 1988-2005, 647 people were charged for offences under this law. More than 20 people were murdered while they were under trial.

In this age of extremism in Pakistan, it is increasingly becoming impossible to propose any changes in the law. On Tuesday, January 4, 2010, the day the Punjab governor was assassinated, there were leaders from the Right and the religious parties who refused to categorically condemn the heinous act. With the prevalence of this mindset, it is plain that the moderates are losing ground.

Now what we are witnessing is the blowback of the army’s actions of over two decades ago. It has lost control over the Frankenstein it was instrumental in creating. The most dangerous aspect of this situation is that nobody is in control now and anarchy reigns supreme.

This article appears in the January 2011 issue of Newsline. Look for it (it’s our bumper Annual issue) at bookstores and newsstands across Pakistan.