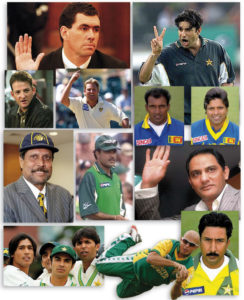 Contrary to current conventional wisdom, match-fixing is not a new phenomenon, nor is it wholly or largely confined to Pakistan. It existed in the days when gentlemen would sit in the Lloyds Coffee House and scheme to ensure the victory of the teams they backed, just as it does now. And the aim then, as now, was and remains to be, making easy money. While Pakistan is currently in the throes of a continuing scandal, and in the spotlight on account of serious charges of spot-fixing, let me state with some assurance that this disease continues to strike across international boundaries, and almost certainly affects all major cricket-playing countries. In fact, while efforts have been made to eradicate this activity at every level, it is as prevalent today as it was when the ICC set up its Anti-Corruption Unit under Lord Condon many years ago. There is some evidence to corroborate that this evil, which eats away at the core of the game, has actually advanced into the institutions of the sport. Yet, the ICC is yet to prove successful in charging and legally proving the guilt of any player, other than two of those that confessed their guilt.

There may well be differing opinions as to why match- and spot-fixing is so difficult to prove even in instances when considerable circumstantial evidence exists of the crime. However, I believe the main reason is that the ‘bad’ boys are cleverer than those that are trying to catch them.

It is a commonly known fact that some 80% of the world’s illegal betting takes place from India. This is totally unregulated and illegal. To my mind, this is the core of the problem; yet such is the strength of money and public relations, that even the ICC has not highlighted this truth. Sadly, cricket management in Pakistan is so poor that over the years the perception has been allowed to develop and grow that the only players who indulge in such criminal acts belong to Pakistan. This is far from the truth.

Let us recall that just six months ago, a major scandal involving match-fixing, money laundering, even team-fixing, erupted in India in which the main officials of the BCCI were named. Lalit Modi was removed from his post and presently stands charged by the police. The IPL teams consisted of players from all major cricket-playing countries. The tournaments had ICC recognition, and yet the ICC apparently carried out no enquiries and acted as if nothing untoward had occurred. The BCCI wisely acted quickly against those apparently involved, thus preempting extra media attention and controversy, but that still does not explain the inaction by the ICC.

I am led to believe that any time a high-profile international cricket tournament is held, bookmakers in England end up inexplicably losing some two to three million sterling. This surely suggests that many more countries are involved. It is speculated that one explanation for these losses is that bookmakers from India lay very high odd ‘fixed’ bets across the United Kingdom through their touts, which number in the thousands. These bets, though small in themselves, add up to sizeable monies. It is understood that the winnings are used to pay off their collaborators. It has been suggested that the sting operation in England last summer was the direct reaction of the bookmakers being fed up of being at the losing end. It is suggested that the well known ‘fake sheikh’ reporter who set up the sting was encouraged by a number of betting houses, who, being legitimate and required by law to provide audited accounts, are not able to indulge in operations that are the daily norm for their counters in India.

I have no doubt that minds better than mine have searched for ways to eradicate this disease from the noble game of cricket. While a total cure may be impossible due to the prohibitive cost, just like total security, I believe it can be reduced to levels we can live with. Let us note that all horse races around the world may not be totally kosher; however, any strange win or loss does get noticed and the regulators proceed to closely examine the reruns. Even in cases that may not be considered criminal, jockeys are fined and thus some deterrence exists. The ICC should therefore, through the member cricket boards, convince the various governments of countries involved in the practice, to legalise the betting industries. This, in the first case, would considerably reduce what the illegal bookmakers of India do today. As very large sums of money are involved, the criminal mafia controls these syndicates that are based entirely on untaxed black funds. With no winnings officially recorded, the possibility for crime is considerable.

While the earnings of the various main member countries of the ICC depend upon individual economies, there are many ICC tournaments in which the monies are equitably divided among the various members. This by and large ensures that all the cricket boards, if managed properly, can afford to pay their players equitably. The ICC should lay down a reasonable scale of payment for the players. I keep hearing the puerile remark that our players are well paid as compared to others in Pakistan. The PCB pays its players with rupees in mind. They forget that they earn in dollars, and what they maintain as big sums, become small when divided by 85. Some years ago the Australian captain used to earn one million Australian dollars annually. Wasim Akram, arguably the greatest left-arm fast bowler of all time, used to earn just USD 60K. It may be considered a big sum in Pakistan, but when he compared himself to the Australian, I am sure he felt short-changed. Let me assure all that at the time, the PCB’s earnings from television rights to coverage were not much lower than those of Australia.

The truth is, our chairmen and officials just cost the board much more, and their perks and other hidden expenses leave a lot less for the players. Our heroes who actually earn the money, meanwhile, are told the remuneration they receive is a ‘lot of money’ in Pakistani rupees!

Malik Arshed Gilani is an avid cricket buff, having travelled to virtually every country in the cricketing world to watch the game being played. This vantage view affords him a measure of authority about the current state of international cricket. Gilani is also credited with organising the first-ever live cricket broadcast to Pakistan from the West Indies in 1993. Following that, broadcasts arranged by him from other cricketing corners of the world in affiliation with Trans World International (TWI) took PCB revenues from USD 10,000 to USD 7 million.