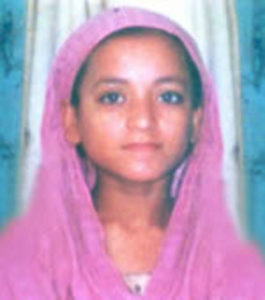 “We have no political support nor affiliation with any tribe, and neither are we in a position to pay ransom. We are depending on the police to recover our child,” says a distraught Jaipal, father of Roshni, the four-year-old Hindu girl who was kidnapped on December 13 from Buxapur town in Kashmore district. This is not the first incident of its kind. Several children belonging to the Hindu community in upper Sindh have been kidnapped over the past several years.

At Kandhkot in Kashmore district an environment of insecurity prevails, especially among the Hindus who form a large segment of the population and mainly belong to the business community. In the last three years there have been about 23 cases of child kidnapping — seven of them were girls — registered by the police. Eleven of them, including three girls, belonged to the Hindu community. Almost all the children were recovered after paying ransom. The ages of a majority of these children ranged between three to 12 years.

Child kidnapping has become a lucrative business for professional criminals, many of whom are associated with notorious tribes and gangs. “Earlier, they were involved in petty theft and robbery. Now they have turned to abductions because abducting children is relatively easier and there is more money in it as the ransom amount is usually very high,” says Yar Muhammad Rind, SP investigations, Kashmore.

And fortunately for the kidnappers, after the recovery of an abducted child, the parents do not normally go in for litigation for fear of reprisals.

In the kidnappings in Kashmore, it was observed that the children were recovered within a week to three months. Interestingly, in all the cases, the police claimed to have recovered the children by conducting raids. But the truth is that in every instance the families secured their child’s release only after paying hefty sums to the kidnappers.

Five-year-old Dheeraj Kumar, a resident of Kandhkot, was the only child to be recovered without payment of any ransom. His kidnappers had earlier demanded 10 million rupees, but the victim belonged to a poor family — his father was a primary school teacher. “We made it clear that we would not pay a single penny and neither would we request the community for donations,” revealed Gianchand, an uncle of Dheeraj. Police intervention forced the abductors to surrender, thus securing the boy’s release without the transfer of any money.

Often the police know who the kidnappers are and once the pressure on them to recover a child mounts, they start to negotiate with the criminals. Shockingly, in certain cases the police have recovered the children by paying ransom at their own end. “The police has a network of informants and often the clues that they get through them help in identifying the kidnapper — but the problem is how to hunt them down. On occasions, the police are under tremendous political pressure not to pursue the culprits. But often the hideouts of the culprits are normally located in no-go or inaccessible areas,” says a former DPO of Kashmore District, on condition of anonymity.

The kidnappers have a mode of operation. Riding motor bikes, they wander around the area in the hope of picking children off the streets. Women, too, are used in the abductions. Most of the kidnapped children are trafficked to areas controlled by professional gangs belonging to various tribes in Sindh and Balochistan. These gangs have safe houses in Balochistan. “Militant groups from Balochistan are involved in the crimes in Sindh. Police have evidence to prove the involvement of militants living in the Dera Bugti and Sui areas,” says an IB (Intelligence Bureau) official, on condition of anonymity.

The police is not as well-equipped as the abductors, who are armed with the latest weapons. Consequently, they fail to nab them during search operations. In many cases, the police could not carry out an operation because it was virtually impossible to access certain areas. At least in one instance, DPO Salam Sheikh had to request the provincial government for help in conducting a raid to locate an abducted child — the police entered the village with the help of a helicopter.

According to police records, the district police in Kashmore, on average, arrested one to 10 persons in a single case. All the cases were tried in Anti-Terrorist Courts, but surprisingly not a single offender has been convicted since 2008. “Our job is to simply arrest the culprits; the courts decide on the punishments. Unfortunately, the offenders are set free after some time because the victim’s families fail to pursue the cases,” says SP Yar Mohammed. But, says Gianchand, “How can I accuse a person in court when I am not sure whether he’s involved in my child’s kidnapping or not?”

Many of the families do not have any faith in the police as it, too, has been found to be involved this dirty game. In fact, often police operations fail to recover the kidnappees because some criminals have been tipped off by an informant from among the police prior to the operation. “In the case of Dheeraj, the police would have recovered the boy in October, on the day when the kidnappers were negotiating with another party to sell him off in a remote village of the district. But the criminals slipped away moments before the arrival of the police because they had been tipped off,” says SP Yar Muhammad.

Alternately, besides fetching ransom, child kidnapping is, on occasion, being used to settle scores or challenge the writ of the police. Criminals use child kidnapping as a tool to discredit the police and manoeuvre the transfer of any officer who gives them a tough time on charges of “inefficient performance.” The same is used by influential tribal chieftains and politicians against the police. Frequent transfers of DPOs and postings of favourite officials has been rampant in the last three years.

Kidnappers also prefer to kidnap Hindu children, because it is generally believed that the media and civil society organisations, including some political parties, have been more responsive to the plight of the minorities. Hence there will be a greater hue and cry against the police. Hunger strikes, shutter-down strikes and rallies to protest child kidnappings have been gaining impetus in the district. Citizens are mobilising the public to exert pressure on the police administration by organising rallies against the widespread kidnappings of children from the Hindu community. On June 22, protests against the kidnapping of seven-year-old Peush Kumar were held in Kashmore, Sukkur and Badin. In a show of solidarity with the victim’s family, people blocked the Indus Highway to pressurise the police to recover the child. He was — but only after paying ransom.

Four-year-old Roshni has been missing since mid-December and every day the police consoles her parents with promises of her safe recovery. And despite the rapid increase in abductions, the existing political leadership has failed to take serious notice of it. Politicians have continued to pay lip service to the Hindu community, but not once has any tribal chieftain or elected representative taken a personal interest in the recovery of a child.

Following demonstrations and extensive media coverage, Ghalib Domki, a member of the Sindh Assembly from Buxapur, vowed that he would recover the girl very soon. “I know that my enemies are behind this kidnapping because they want to defame me,” says Domki. Whether the MPA from Sindh delivers on his promise remains to be seen.