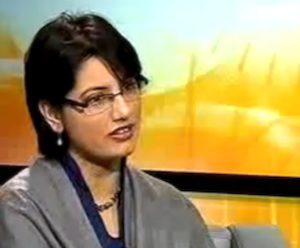 Women entrepreneurs in the developing world make a large and often unrecognized contribution to their countries’ economic and social development. Ammara Farooq Malik is one such person, constantly on the go and searching for everyday pearls of wisdom by interacting with and helping others.

A graduate from Kinnaird College, Ammara is a young and energetic writer, social volunteer and teacher of law. Founder of SEPLAA (Seeds of Education, Policy and Legal Awareness Association) Foundation, Ammara leaves no stone unturned in her pursuit to strengthen communities. Recently, she adopted a school with more than 150 underprivileged children in Ghora Chowk Abadi, Lahore. The aim is to turn the school around. In fact, the SEPLAA Foundation wants to revamp the curriculum completely. The children at the school have mostly been child domestic workers at some stage and are described as very talented and eager. The concern is that they lack the proper guidance. The goal is to retrain teachers and equip them with the tools and approaches to educate in a creative manner rather than focus on rote learning. Ethics and character building will be focused on too.

Monthly competitions are already in place at the school to motivate the students to excel. Volunteers are donating prizes, and it is the young volunteers who conduct these creative, competitive sessions. The result is a programme in which privileged youth give opportunities to the underprivileged and promote charitable educational activities within the community. SEPLAA is in the process of adopting more schools under the same model.

Ammara describes herself as a workaholic by nature. She was, however, forced to adjust her lifestyle. Difficult times beset her and her family when her daughter fell ill and needed a bone marrow transplant. Ammara stayed at home to take care of her daughter. During this period, she developed a strong desire to do more for others too. “I felt I needed to give something back to the community, despite having two school-going children, one of whom was dealing with a transplant,” she says. “An idea popped in to my head to collect like-minded people who could contribute towards the well-being of our generation in health, education and the environment.”

So when the severe floods hit in July and August of 2010, Ammara knew she had to help. She became enthusiastically involved in flood-relief efforts. She accumulated funds from friends and immediately launched an initiative. Without giving it a second thought, she galloped towards the flood victims with donations and a unique yet cost-effective “Recycled Water Bottles Campaign.” The campaign aimed to deliver as much clean water as possible to the flood affectees: no fewer than 6,000 bottles were distributed to remote rural areas of Sindh and Punjab. Students from different schools and universities were intensely cooperative in supporting this drive. In addition to this, SEPLAA conducted a mission to Muzaffargarh on August 28, 2010, and managed to distribute family packs to 1,000 families and about 100 goody bags with sweets and toys to children as well.

Given all the mistrust of the government and knowing many organisations have been painted with the broad brush of corruption, Ammara understands the critical need for transparency. “We had receipts, bank deposit details, bank statements, photographs, video footage and published press releases frequently updated on our website. This helped provide a level of absolute authenticity to our work and strengthened our credibility.”

Madiha Riaz a young lawyer from Islamabad, currently residing in Karachi and a representative of SEPLAA, says that Ammara was the inspiration for her to join this organisation as a volunteer. “Ammara takes initiative,” says Riaz. “She is a decision-maker and a motivator who grooms people to think constructively.”

Under her inspiring leadership, SEPLAA continues to grow by leaps and bounds. It plans to produce a global calendar of its events in different cities and countries and also to open a second functional office in the United Kingdom by the end of 2011. “We hope to make this a truly global platform for expatriate Pakistanis who wish to contribute and give back to their country.” In the next five years, Ammara hopes to bring out several publications covering a wide set of issues, some defending the rights of the poor, some focusing on the youth (particularly the re-branded magazine Impact SEPLAA) and some research publications. SEPLAA also plans to have community-level awareness-building activities that will highlight social issues and bring the messages home. The activities will include blood-donation drives, tree-plantation campaigns and book-reading sessions at public hospitals, public schools and even prisons. Its prime focus will be to establish SEPLAA as a global expert in the field and to bring positive recognition and change to Pakistan.

It’s a noble cause, but also one that comes with several challenges. Of course, a dedicated fighter like Ammara wouldn’t have it any other way.