On May 2, 2011, President Asif Ali Zardari presided over the swearing-in ceremony of Pakistan Muslim League (Q) members to the federal cabinet.

While the PPP and PML-Q talked up their alliance, saying this was the time for “political reconciliation,” not everyone bought into the rhetoric. Besides criticism from the official opposition (and traditional rivals) the PML-N who have been left out in the cold, there are signs that many other people in the country also dislike the new power-sharing partnership. Here’s what Gallup Pakistan discovered:

“According to the results of a recent Gilani Poll conducted by Gallup Pakistan, only one third of all Pakistanis (33%) favour the sharing of power by the PPP and the PML-Q in the centre.”

Interestingly, the PML-Q shared this poll on the homepage of their website (pml.org.pk), seemingly positioning the result as favourable: they removed the term “only” from the statement. Perhaps someone should remind them that while 33% of the vote may win elections in highly divided, multi-party countries such as Pakistan, it is still no majority. Obviously, the results suggest that 67% of people do not like the idea of this alliance. That is a majority.

Unsurprisingly, most of the poll respondents do not have high hopes for the alliance’s longevity either. Gallup Pakistan says, “While 20% are quite certain that the unity between the two parties will last, 29% are somewhat skeptical and 35% think this is very unlikely.”

Below, Nadir Hassan looks into the birth of this alliance and how the political chessboard has been laid out for the manoeuvring that will follow. And then you can decide whether you side with that 33% or not.

By now even the most optimistic among us are aware that politics and principles rarely mix well — no matter how much leeway is given for expediency. However, recent developments in Pakistani politics show just how important survival is to floundering political parties.

When Asif Zardari returned to the country after the assassination of his wife, he immediately went on the offensive. The pro-Musharraf PML-Q, then in power, was vociferously castigated as the ‘Qatil League.’ Yesterday’s murderers are today’s saviours.

The PPP had already lost the JUI-F and the MQM is always one price hike or personal slight away from ditching the coalition government. The upcoming budget is sure to include harsh IMF-dictated terms and the PPP had no guarantee that its unreliable partners in government would vote for the budget and accept the inevitable public outrage. Hence the need to come to an understanding with the PML-Q and thus its inclusion in the coalition and the ministries.

On May 2, seven PML-Q members took oath as federal ministers, six as ministers of state, two as advisors and another two as special assistants.

The PML-Q chief Chaudhry Pervaiz Elahi was handed the ministries of Defence Production and Industries, and has been promised the deputy prime ministership once the National Assembly passes legislation to the effect. Faisal Saleh Hayat, himself a former PPP member, takes charge of the Housing and Physical Planning ministry. Other appointments include Anwar Ali Cheema for Health, Chaudhary Wajahat Hussain for Overseas Pakistanis, Amir Muqam for Production, Ghaus Bakhsh Mahr for Privatisation, and Akram Masih Gill for Minorities.

The following have been appointed as ministers of state: Riaz Peerzada for Production, Raza Hayat Hiraj for Housing, Sheikh Waqas Akram for Overseas Pakistanis, Asif Tauseef for Privatisation, Bahadur Khan Seer for Defence Production and Sardar Shah Jahan for Health.

Raja Basharat and Mustafa Khokhar have been appointed as advisors to the PM while Qasim Shah and Ahmadyar Hiraj have assumed the posts of special assistants.

The PPP aside, for the PML-Q, too, this deal makes sense. Already, MNAs from the party were fleeing in droves to rejoin the PML-N. The PML-Q is a party of opportunists who left the PML-N after Musharraf removed the Nawaz Sharif government and, under certain conditions, the PML-N has been welcoming them back. For the PML-Q to avoid disintegration, it needed to team up with the PPP. Additionally, PML-Q chief Pervaiz Elahi’s son Moonis is facing trial for corruption and a bit of PR help from the PPP would undoubtedly help his cause. 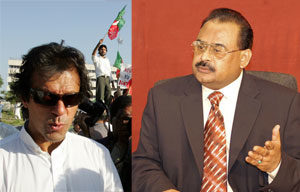 This marriage of convenience is likely to last beyond the next election. The PPP needs a coalition partner to pressurise PML-N’s government in Punjab and try to regain the province in the next election. For the PML-Q this is also the only way to taste power in the province again and possibly regain a chief ministership. This would also explain why the PML-Q has hinted that it will support the PPP’s demand for a separate Seraiki province to be carved out of the Punjab. In fact, the deal between the PPP and PML-Q includes a call for new provinces to be carved out of the Hazara area in Khyber Pakhtunkhwa and the Seraiki belt in Punjab.

The PML-N, meanwhile, seems to have alienated most of the political actors in the country. Its relations with the army have been strained ever since Musharraf came into power, and there are no signs of a rapprochement. The heyday of charters of democracy and grand coalitions with the PPP is also over. And the PML-N and MQM have preferred name-calling to alliance-building.

It is the first of these tussles that looks likely to shape the upcoming political scenario in the country. The PPP is increasingly unpopular, so the next election is likely to be toughly contested, with the PML-N as a marginal favourite given its strength in the Punjab. However, it is conjectured, the intelligence agencies are stepping in to ensure that the PML-N with its anti-army rhetoric does not get into power.

The pieces have fallen into place quite quickly. The ISI had a bitter falling out with the CIA over the Raymond Davis saga and its chief Shuja Pasha, in a meeting with his US counterpart Leon Panetta, demanded an end to the drone strikes. Reports of an Imran Khan-ISI understanding began to emerge. As if on cue, Khan’s party, the PTI, held a large rally against drone strikes in Peshawar.

The machinations did not end there. Just a few years ago, Khan was threatening to file cases in London against MQM chief Altaf Hussain, while the MQM had even barred him from entering Karachi for a while. That broken relationship is swiftly being mended as is evident by his successfully setting foot in Karachi, unlike before.

With these developments in mind, it looks like the intelligence agencies are preparing an Islami Jamhoori Ittehad (IJI) Part II. The irony of this, of course, is that it was the PML-N that spearheaded the IJI, while this new burgeoning alliance seems to specifically be targeting them.

There are still a couple of years left before the next elections. Taking into account all that has happened in just one month, it would be foolhardy to make any predictions. Only one thing can safely be said: Whatever happens, it will be something no one could have foreseen.

Sharing the Pie with the King’s Men