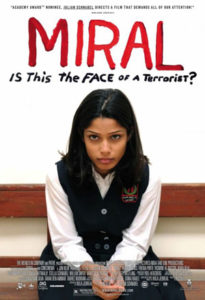 Any film as politically and historically specific as Miral needs to be evaluated on two separate levels: how well the movie entertains, and how well it succeeds in depicting the events sans bias. Given the sensitive subject matter, its viewers cannot be too nit-picky and only once they have put their inhibitions aside, will they be able to appreciate the poignant drama that lies beneath.

Directed by artist-turned-filmmaker Julian Schnabel, who happens to be Jewish himself, the movie is surprisingly presented from the Palestinian point of view. Miral follows the interconnected lives of four Palestinian women over four decades. It begins with Hind Husseini’s (Hiam Abbass) story, a real life woman who founded a boarding school upon encountering 55 scared and orphaned children on the streets of war-stricken Israel.

Fast forwarding to 20 years later, we meet young Nadia (Yasmine Al Massri) who flees from her sexually abusive stepfather only to become a belly dancer in a nightclub. Beautiful but tormented, she lands herself in jail after getting into a public brawl where she meets Fatima (Ruba Blal), a former nurse who turned to terrorism in support of nationalist ideals. Upon leaving jail, Nadia marries Fatima’s modest and kind-natured brother Jamal (Alexander Siddig), a muezzin at a local mosque and longtime friend of Hind’s. Nadia dies a tragic death but leaves behind a young daughter, Miral (Bollywood’s coveted Frieda Pinto) who enrolls in Mama Hind’s boarding school and finally becomes the main protagonist of the story. Having established a great deal of context by now, the story proceeds to delve deeper into its subject matter and through Miral’s eyes we witness war, violence, destruction, hate, struggle and finally, a compromise as the movie concludes with the historical signing of the 1993 Oslo Accords which acknowledges both Israel and Palestine as separate states (even though Schnabel reminds us in postscript text that the treaty was never enforced).

Generally well-acted and coupled with beautiful cinematography that whirled and shook with admirable skill, Miral attempts to be a coming-of-age story that tries hard to avoid taking a harsh political stance — but alas, in the deeply polarised Israel-Palestinian conflict, that is perhaps almost impossible. One side will inevitably feel betrayed and misrepresented and the heated debate that ensued after the movie’s release is proof of that. That notwithstanding, the movie actually felt strangely non-committal, as if it were afraid to express anything too heavy or controversial. In the end, Schnabel even goes on to dedicate the film “to everyone on both sides who still believe peace is possible.” However, he makes excellent use of newsreel footage to create a sense of urgency in his drama, and his use of handheld cameras lends the film an overall air of authenticity.

For a movie that picks up more momentum with every passing minute, Miral ends a bit hastily. But to be fair, it would be a difficult task for anyone to devise a satisfying ending for a movie based on a plot that remains unresolved to date. So while Miral may not be a comprehensive documentary of the Israeli-Palestinian conflict, it does superbly well in offering two hours of riveting drama that keeps a viewer wanting more.

This movie review originally appeared in the May 2011 issue of Newsline under the headline “Riveting Drama.”