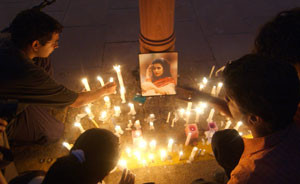 April 29, 1999: Jessica Lall, a promising model and part-time barmaid, is shot dead by a powerful politician’s son after he was refused a drink by the model at a New Delhi socialite’s party in the presence of the city’s glitterati.

It was only in 2006, after about seven years of untold harassment of the victim’s family, intimidation of witnesses of the crime and consequent legal setbacks, that a movement of justice for Jessica was sparked by the media and civil society in India. New Delhi’s India Gate witnessed an unprecedented candlelight vigil besides Chandigarh from where Manu Sharma, the killer, hailed. The public outrage ultimately led to life imprisonment for the killer. And thereafter, the ‘Justice for Jessica’ movement inspired the Rani Mukerji-Vidya Balan Bollywood film — No One Killed Jessica.

In 2007, Kolkata, India’s city of political processions, witnessed its first apolitical march against the ruling Communists for an incident of police firing that killed 14 people in a rural region called Nandigram where villagers were protesting a possible seizure of their land for a low-cost industrial and chemical hub.

From the city’s intellectuals to the fence-sitting, usually ambivalent middle class, the procession of thousands saw a microcosm of the city joining hands to protest the killings and repression. Around the same time, the city witnessed a new solidarity for a Muslim family whose son’s body was found alongside a railway track under mysterious circumstances a month after marrying the daughter of a rich Hindu industrialist. Rizwanur Rahman’s death — he was supposedly driven to suicide by the Hindu girl’s family — would have gone unnoticed had civil society not come forward and clamoured for justice. 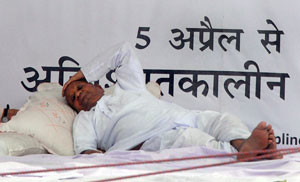 April 2011: A Gandhian social activist called Anna Hazare — about whose past activities little was known outside his home state of Maharashtra — sparked a new movement in India as he sat on a fast-unto-death in the national capital, demanding the drafting of a new ombudsman law against corruption with civil society participation.

On April 9 this year, for the second time in one week, Indians poured on to the streets celebrating a victory, just days after the night-long revelry on account of India’s cricket World Cup victory. This time the celebrations were for the Hazare-inspired movement’s success in bringing the government to its knees on the issue of corruption. It was a proud moment for civil society activism in India when the government accepted the demands of the fasting social activist and his tribe that was swelling across Indian cities, to incorporate civil society members in the making of the law, known as the Jan Lokpal Bill (Citizen’s Ombudsman Bill).

The 73-year-old Anna Hazare was demanding a tough bill against corruption, and only agreed to break his 98-hour long fast after the government capitulated.

Though the proposed legislation later got mired in controversy over the constitution of the civil society panel to draft the law, the movement spawned by Hazare’s fast inspired people to fast alongside him in cities and towns across India, among them student communities from some of the country’s premier educational institutions.

In a country of a countless mutinies — from the demands for separate states to those for reservations in jobs, for justice and for economic salvation, among so many others, civil society movements for good causes have become a new pillar of the Indian polity.

With the growing 24/7 media coverage of every conceivable issue — often bordering on sensationalism and overkill, leading to the artificial creation of a mass hysteria, as spoofed in films like Aamir Khan’s Peepli Live — India is witnessing a new alliance between civil society and the media, and the battle lines are drawn. Politicians, as always, subvert the system, but now civil society is fighting back, riding on the back of a fodder-hungry media. 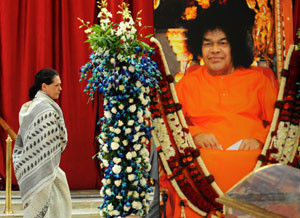 While India chose secularism to govern its nation of 1.21 billion people, including its huge Muslim population, God and godmen never quite went out of circulation in political and upper-crust circles. While the Hindu nationalist Bharatiya Janata Party (BJP) symbolises the rise of democracy-inclined saffron power in secular India, some men in saffron robes outside that spectrum continue to influence top politicians, corporate bigwigs and showbiz celebrities of any faith or hue. The controversy surrounding godmen is not new to Indian politics — even the all-powerful Indira Gandhi was never out of its ambit — but when Sathya Sai Baba, hailed as a god to millions despite the myriad controversies surrounding him, passed away on April 24 at age 85, it was the end of an era.

Millions of his followers spread across the world believed he was the living incarnation of God himself, though his credentials in his long span of public life did not go unchallenged. There were allegations of hand-trickery and sorcery to bedazzle followers, and even of sexual misdemeanors, but Sai Baba survived those and rose to run one of the biggest charitable trusts in the world. His trust’s assets across the world ran up to 40,000 crore Indian rupees. And allegations apart, Sai Baba ran a virtually parallel government as he set up hospitals, schools and colleges across the country — offering the best healthcare facilities for rich and poor alike — brought safe drinking water to entire towns and villages, and transformed the tiny village of Puttaparthi in the southern state of Andhra Pradesh into a magnet for visitors from across the world.

The rise and rise of Sai Baba reaffirms the Indian ruling classes’ unflinching allegiance to gods and godmen whose institutions are often seen as the club of the rich, the powerful and the famous.

This tailpiece is for fine print. According to the latest census report, officially India is now a 1.21 billion strong country. But the provisional data of Census 2011 has shown that there are 914 female children aged zero to six years for every 1,000 males. Now trust central and Kashmir leader Farooq Abdullah to suggest the queer and quirky. At a public function, Abdullah said perhaps turning ‘gay’ is the solution to India’s skewed sex ratio if the country doesn’t make a concerted effort to reverse it. “The day is not far when there will be no girls to marry and we’ll all become gay. That might happen,” he said. The adventurous remark did not really please the gay community. He was slammed in the social media. Poor joke, Abdullah.