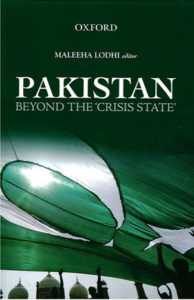 Pakistan: Beyond the ‘Crisis State,’ an anthology of essays edited by former ambassador to the UK and the US Maleeha Lodhi, is its title. Implicit in the title is the acknowledgement that Pakistan indeed is a state that is in crisis, and that it is time to propose solutions that will reverse the trajectory of a failing state. The task the collection sets itself is not a modest one — if there is any possible problem that exists you can be sure Pakistan is suffering from it — which is why it is not surprising that Beyond the ‘Crisis State’ fails to meet its lofty goals.

This is not to deny that there are some worthwhile essays in the collection. The very first contribution, by historian Ayesha Jalal, is also the very best. Titled ‘The Past as Present,’ the essay looks at how distorted national narratives are promoted by governments that have short-term political goals. The media too, Jalal believes, is culpable in promoting the odious view that Pakistan’s current crises are due entirely to the machinations of outsiders — primarily India. Although the essay format is not conducive to the literary flourishes that litter her historical scholarship, Jalal deploys ruthless logic to dismantle the ways in which flawed and dangerous notions of national identity have been foisted on the population. No solution to counter this is explicitly proposed, but none is needed. Jalal’s chapter makes it all too clear that unbiased history and a critical media can reverse the tide.

There is one element that is underplayed in Jalal’s contribution: an education system that is more ideological than informative. That is not a weakness in the book, though, as Shanza Khan and Moeed Yusuf take up the baton in a later chapter titled, ‘Education as a Strategic Imperative.’ They analyse both madrassa education, which they describe as “producing cadres suitable only for the clerical sphere,” and state education where the syllabus is “closely managed by the state and provides a highly skewed historical narrative that is nationalistic and creates a siege mentality by portraying Pakistan as being perpetually under threat from all corners.” Having accurately diagnosed the condition, however, the writers’ solutions — greater funding, more objective textbooks — while unarguably correct, present a wish list without being able to explain how this can be achieved in the current political and social climate.

The general tone of pessimism is perhaps understandable. The most optimistic chapter, ‘Why Pakistan Will Survive’ by novelist Mohsin Hamid, is not only the weakest, it is also ultimately the most depressing essay in Beyond the ‘Crisis State.’ Hamid makes several questionable assertions, of which the most questionable is the one that states: “The ability to hold our noses and put up with fellow citizens we don’t much like is surely a modern Pakistani characteristic.” He justifies this by saying that suicide bombers and those who bury women alive are aberrations, not the norm. That is certainly true but the passive way in which Pakistan has accepted intolerance, both officially-sanctioned and cultural, is quite startling. Quite apart from the Taliban, the second-class status of Ahmedis and the long-standing violent conflict between Sunnis and Shias should dampen Hamid’s optimism.

Even worse, Hamid’s solution to Pakistan’s woes is startlingly simplistic. He wants an improvement in tax collection. He says, “Our number one war shouldn’t be a War on Terrorists… it should be a war on free riders, on people taking advantage of what Pakistan offers without paying their fair share in taxes to our society.” Certainly, tax revenue needs to be increased, as a matter of fairness if nothing else. But even if this does happen, and even if the increased revenues are spent wisely, it will be years before its results are seen in education and improved economic growth. Meanwhile, the militant menace, whose roots are political as much as economic, continues spreading. Hamid’s optimistic take on the present and his facile solution for the future show that there are still some who have a head-in-the-sand approach to Pakistan’s problems.

More generally, there are two gaping flaws in Pakistan: Beyond the ‘Crisis State.’ As a whole, the collection seems to have misplaced faith in the country’s middle class. The future, many of the contributors seem to believe, lies in this growing segment of the population. Lodhi, in her own essay ‘Beyond the Crisis State,’ posits five possible futures for the country, the most optimistic of which is the hope that the middle class will assert itself and bring a new kind of politics to Pakistan. This rosy projection ignores reality. It is the middle class that is being increasingly radicalised thanks to a sensationalist media that often acts as a propaganda arm of regressive forces, and an education system that has inculcated anti-India and anti-US attitudes.

Secondly, there is the very puzzling omission of what the army has wrought on Pakistan. Certainly, the central role the army has played in virtually every crisis that has beset the country is acknowledged in fine chapters by Zahid Hussain and Ahmed Rashid. But what the book as a whole lacks is a critical look at the army’s role in Pakistan’s history — from how it became an engine of economic power to how it fostered and to this day protects, to some extent, the same militants that have brought Pakistan to a crisis state. Failing to give this vital subject much critical scrutiny ultimately makes Pakistan: Beyond the ‘Crisis State’ a book that is incomplete. By imagining a past and a future where the military is not the central actor, the editor and contributors have done a great disservice to the reader.