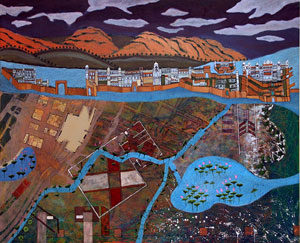 The world today has developed into a shooting range, where bullets breeze through the air decimating anything in their way. The mother of warfare artillery, the ‘bomb’ and its patron ‘terrorism,’ has become a common phenomenon almost like man’s favourite toy. This phenomenon began years ago and artists began inking events that scarred their memory onto a blank canvas, using varied media to illustrate their thoughts. Somehow, up till now, the subject matter, “war,” “bloodshed,” “terrorism” and so forth have usually been represented as a collective viewpoint rather than a personal one, where the artists working on these themes haven’t really plunged into analytical, theoretical assessments that largely confine themselves to surface studies.

However today, two artists, Farooq Mustafa and Asad Hussain have delved further, inviting the viewer to penetrate beyond the purely visual.

Farooq Mustafa, who spent two years in Japan in a post-graduate research studies programme at the Department of Arts and Design at the Tsukuba University in Ibaraki Ken, adopts in his work the Japanese and Mughal miniature illustrative technique. The content of his paintings comprises topography, which captured his interest while in Japan, intertwined with abstract illustrations of topography at home and objects relating to his past memories. His mixed media on canvas, titled ‘A City in My Dream,’ draws the interest of the viewer first through his orthogonal drawing merging with the organic fluid stream of water, which has lilies superimposed and strewn over it. Interestingly, he has painted not the battlefield Pakistan is today, but what he remembers of his country back when there was peace here.

Up close, most of Mustafa’s work possesses a cut and paste aspect to it: some areas of the painting blend in seamlessly, others are sharply demarcated with certain areas of the canvases literally cut out and pasted over with completely different pieces in different mediums. The juxtaposition of geometry and themes seems to reflect Mustafa’s take on the two cultures he portrays.

There are other pieces that capture one’s attention as well: a Jackson Pollock-influenced canvas with a spattering of paint, other memories of his country depicted through Lollywood scenes and random words floating across a canvas titled ‘1947,’ among others. 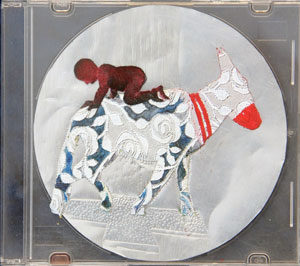 Asad Hussain, a multidisciplinary artist, currently works as a set designer at one of the biggest media institutions in Pakistan. Where artists usually grapple with the present, in his work, Hussain foresees the future. His concern lies with the emerging generation who may be rendered helpless because of the oblivion of the present generation.

A recurring feature in Hussain’s work are animals and most evident, the lamb. This animal serves as a symbol of innocence which once existed, but is now dead and buried, incapable of ever resurfacing — reflective of the fate mankind has carved for itself. His piece, ‘Power Play,’ also mixed media on canvas, depicts a child carrying an elephant. It is ironic to see that a child who once played with the elephant now carries it on his shoulders suggesting perhaps the changing tide of time.

Hussain’s canvases depict how mankind is enmeshed in a web of savages, where everyone is out to get each other. His figures are subdued, usually present in silhouettes, while his animals are done in metallic sheet drawing. A striking painting greets viewers at the entrance to the gallery: a huge canvas, ‘Like Done Like,’ illustrating the positive and negative characteristics of a dog and drawing parallels, conceptually, with humans today.

Both artists showcase ingenuity, imagination and skill in their work — which hints of infinite promise.