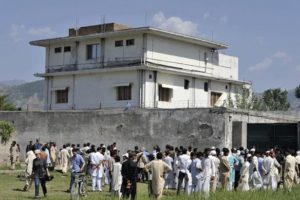 Thanda Chua in Bilal Town, Abbottabad, tucked away in the scenic Damtor mountain range, 71 km north of Pakistan’s capital Islamabad, was jolted awake in the early hours of May 2. It began with the hum of helicopters and then came a “huge window-shaking bang,” reported Shoaib Athar, who had escaped from the din of city life to find peace in the quieter environs of Abbottabad. He live-blogged the Osama raid — beginning with his first tweet at 1 am — without even knowing what earth-shaking event he was recording for posterity. The details came later: the action underway owed to a midnight operation by US Navy SEALs, micro-managed by the CIA, to take out the engineer of 9/11 and the chief of â€¨Al Qaeda: Osama Bin Laden (OBL).

Residents say they saw three choppers hovering in the air around the white mansion in the vicinity. Then, they reported, there were a series of blasts. Forty minutes later there was silence. An anxious President Obama, Secretary of State Hillary Clinton and Vice President Joseph Biden (clutching rosary beads), along with members of America’s national security team, watched the operation unfold in real time at the White House, while the CIA director Leon Panetta gave a running commentary from the CIA headquarters in Virginia. And overnight, the quiet town of Abbottabad was in the global spotlight.

The sequence of events as culled from various sources was as follows: the US SEAL team, aboard Black Hawk copters, raided the OBL compound. An alarm was raised, alerting the residents of the house as 25 SEALs breached the walls. A shoot-out followed in which three men and one woman were reportedly killed. US authorities believe one of them was OBL’s son. The commandos then proceeded to the second floor where OBL and his wife were hiding. His wife was shot in the leg. What happens thereafter, remains moot.

According to official US authority statements, bin Laden was shot dead upon sighting. “Geronimo (code name for OBL) EKIA (Enemy Killed In Action),” reported Panetta, while SEALs searched for computer hard drives and other material. Other reports said that Osama was shot dead by one of his own guards as willed by him, but his â€¨12-year-old daughter reportedly maintained he was shot dead by US forces. Subsequently, statements from the US administration acknowledge he was unarmed.

A photograph taken by a US SEAL commando, wearing a helmet-mounted camera, for verification through facial recognition software, confirmed that it was indeed Osama. According to the official statements put out by the US government, OBL’s wife who was captured at the premises identified him and confirmed his death and DNA samples (compared to tissue and blood samples taken from Osama’s deceased sister who was treated for cancer in Boston) subsequently corroborated this.

Nonetheless, speculation and a host of conspiracy theories persisted. These were fueled by the events. Without offering — the global public watching the story unfold — a single tangible piece of evidence as proof of what had transpired, the force conducting the raid dumped his body into the sea.

I visited the million-dollar mansion where Osama had spent his last few years — a far cry from the Tora Bora caves where he had taken refuge in the late ’90s — just a stone’s throw away from Pakistan Military Academy (PMA), Kakul, the prestigious training academy of Pakistan’s military and a highly sensitive and guarded area. How had routine reconnaissance missions missed a structure that was spread over six kanals, had three storeys, towered over neighbouring houses, was fenced with barbed wire, had no technological equipment (not even a telephone), but was rumoured to have cameras mounted on the compound’s 18-foot high boundary wall to screen visitors?

Conjecture has it that at the time of the operation, OBL was at his hideout with 17 or 18 others: his sons, three wives, two brothers and eight to nine children (paternity unconfirmed) and three bodyguards. According to eyewitnesses, a blue Surf jeep was seen rushing out of Osama Bin Laden’s hideout seconds before the start of the midnight operation, towards the main Abbottabad-Havelian road.

The next morning the area was crawling with security forces and journalists — among them myself — as the world’s attention turned to this sleepy town. Qasim Ali, a 30-year-old cab driver who lives in one of the houses next to the mansion in Thanda Chua told Newsline that he could not even have conceived what the target of the three choppers, hovering over their houses in the darkness, was. He was clearly perplexed as to what made Osama bin Laden choose Thanda Chua to hide with his family. “I was at my house at midnight on May 1, hardly a few minutes walk from the mansion — owned by two brothers from Wana Agency, North Waziristan, who run a transportation business — when the three choppers started to circle in the sky at a very low height. They disappeared, but returned within a few minutes to drop something. One could not see exactly what due to the complete darkness, since it was load-shedding time and there was no electricity. Then the choppers landed and a series of blasts rattled the area, followed by short-range gunfire. After half an hour or so the guns fell silent and then two choppers took off from the green fields, in which the mansion stands. We had no idea then what had happened and who was killed,” stated Qasim Ali.

Ali is not the only one among the area’s residents who was oblivious to what happened during the midnight raid. Others expressed equal disbelief about the night’s events and their outcome.

Nawaz Hussain, an area shopkeeper, said the mansion had been constructed in 2005, ostensibly by two brothers hailing from North Waziristan who had earlier purchased the land, but he had never heard of any Arab living within it. “I can only say some people with beards, who spoke Pashto, used to come to my shop to buy items of daily use, but their purchases were never unusual or extraordinary, or things which would hint that some high-profile people, like Osama bin Laden and his family, were living in the house,” he asserted.

The town’s residents contend they were ignorant about who lived in the house because local culture dictates that people with Pathan background do not easily mingle with others if there are purdah-observing women in their midst. The question is, did the local authorities have an inkling of who actually resided there?

In the aftermath of the raid, Pakistani officials, embarrassed at having been caught completely off-guard, maintained the large house was being monitored by Pakistani secret agencies and they were sharing their information with US spy agencies. Pakistan’s Foreign Office has denied any prior knowledge of the US mission, but confirmed sharing information with the US about the compound. In that case, why didn’t the Pakistani army take out OBL?

There are no answers. All that has emerged is a terse statement from the Foreign Office saying, “Pakistan was continuously in contact with the US on Osama’s possible hideout, which led to Osama bin Laden’s killing on May 1, in Abbottabad.” (Read a longer statement by Pakistan’s Foreign Office here.) It has also been maintained that Pakistan’s Air Force did mobilise that night, but US forces had already left the country’s airspace by the time the PAF jets got their act together.

Abu Faraj al Libbi, Al Qaeda’s top leader and operational chief, was arrested in Mardan near Abbottabad in 2005, and Jemaah Islamiyah’s Umer Patek of Indonesia — the main culprit of the 2002 Bali bombing, which killed 202 people including seven Americans — was arrested from Abbottabad on March 31 this year. Al Libbi and Umer Patek’s arrest and now Osama’s killing in Abbottabad have left many questions unanswered. Conspiracy theories abound as the world grapples with the death of the world’s most wanted man, killed after a 10-year-long hunt. And chances are this case too will go into some file marked ‘Unsolved Mystery’ like so many before it.

This article was originally published in the May 2011 print issue of Newsline.