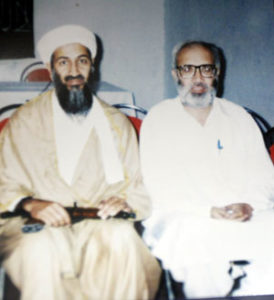 Journalist Rahimullah Yusufzai (right) sits with Osama bin Laden for a photo after conducting an interview with the infamous militant in Afghanistan in 1998.

On May 2, 2010 (Islamabad time), the US government announced that it had carried out a successful mission on Pakistani soil and killed Osama bin Laden after pursuing him aggressively for almost 10 years.

In this article from our archives, Pakistani journalist Rahimullah Yusufzai talks about his three-hour interview with Osama bin Laden in 1998. It’s a story that remains a milestone event in his distinguished career as a journalist.


On a chilly Kandahar night in south-western Afghanistan on December 23, 1998, I was asked to accompany a group of Arabs who had come to fetch me after a six-hour wait. I hadn’t slept the previous night, having travelled from Peshawar to Islamabad by road and then taken a long UN flight to Kandahar with stopovers in Jalalabad and Herat. Arriving in the afternoon and fasting as it was Ramazan, I wished the interview with Osama bin Laden was delayed till the next morning so that I could get some sleep.

This was the reason I was in Kandahar, the birthplace and spiritual capital of the Taliban. The Taliban leader Mullah Mohammad Omar, who controlled access to the Al-Qaeda head, had given approval for my interview with bin Laden.

Among the group of Arabs I accompanied on the journey to meet bin Laden was Sheikh Taseer Abdullah, a well-built Egyptian police officer who was later killed in the US bombing in Afghanistan in 2001, and Dr Ayman al-Zawahiri, also from Egypt and leader of the Islamic Jihad organisation. At bin Laden’s press conference, which I had attended at the Al Badr camp in Zhawar, in Afghanistan’s southern Khost province on May 26, 1998, he had introduced Abdullah, also known as Mohammad Atef, and Abu Hafs as his right-hand men. It was after his death that Zawahiri became a deputy to bin Laden and is now considered as Al-Qaeda’s ideologue. As he spoke good English, he was also going to be my translator during the interview with bin Laden.

Incidentally, it was at the news conference in Khost that bin Laden announced the launch of the International Islamic Front for Jihad Against Jews and Crusaders and blamed the US and Israel for the sufferings of Muslims all over the world.

After a two-hour drive on the Kandahar-Herat road in a sturdy Land Cruiser driven by Abdullah, we took a detour onto a dirt track in the desert that appeared to be somewhere in the Helmand province. On the way, both Abdullah and Zawahiri had declared that they were neither afraid of death nor America. They argued that the US would not face opposition from the Muslims if it stopped Israel’s occupation of Palestine and did not allow it to interfere in the affairs of Islamic countries.

The sight of some lights at a distance was a welcome relief and it turned out to be our destination. Three big tents pitched in the desert, glowing firewood on which food was being prepared for Sehri meals and a generator producing electricity announced bin Laden’s makeshift camp.

The larger tent where bin Laden received me provided relief from the biting winter cold. There was some commotion when bin Laden entered the tent and everybody stood up as a mark of respect. He walked with the help of a stick, reviving memories of our last meeting in Khost in May. At the time, his companions had explained that he was suffering from a backache and needed the cane to keep his balance.

He was tall and lean, his beard slightly greying and his head covered by a turban. Everybody was dressed in shalwar kameez. Bin Laden and his aides spoke some words of Pashto and Persian; however, he preferred to answer questions in Arabic. He was soft-spoken, but his voice would rise whenever provoked or wanting to emphasise a point, more so while criticising the US. Two Taliban foreign ministry officials who had accompanied us from Kandahar, and a dozen bin Laden men, including his teenaged son Mohammad, listened in rapt attention as he spoke.

Bin Laden, sitting cross-legged on one of the warm mattresses in the big tent, was pleased to meet me again and was happy that his interview would be carried by Time magazine, ABC News, BBC and The News International. He obviously wanted a wider audience and that was a major reason why I was chosen to interview him.

Over the next three hours, bin Laden sipped green tea from a kettle that was regularly being refilled, praised Allah and His Prophet Muhammad (PBUH) before starting a sentence and calmly answered every question. Just before dawn, I embarked on the return journey to Kandahar.

Zawahiri explained that they had insisted on doing the interview at night to enable bin Laden to drink water and take tea as he couldn’t do so while fasting during the day. I wished it were done in daylight to get good pictures of bin Laden. My problem was solved by bin Laden’s own technicians, who assisted me with the video camera and put on the headlights of two pick-up vans to provide light for filming.

From his appearance — shy and mild-mannered, with delicate hands — one could never imagine this was a man accused of sponsoring acts of terrorism.

In that interview, bin Laden, for the first time, came close to indirectly accepting responsibility for the bombings of the US embassies in Nairobi and Dar-es-Salam. He said his International Islamic Front for Jihad against Jews and Crusaders had issued a fatwa calling on the Muslim ummah to carry out jihad to liberate occupied Islamic countries, including the holy sites in Palestine. He claimed that Muslims the world over had responded to his Front’s decree. “If the instigation for jihad against the Jews and the Americans in order to liberate the al-Aqsa Mosque and the holy Ka’aba is considered a crime, let history be a witness that I am a criminal!” he declared.

Click below to read about the “best stories” of other well-known journalists:

This article originally appeared in the January 2010 issue of Newsline and was first posted online at this link.