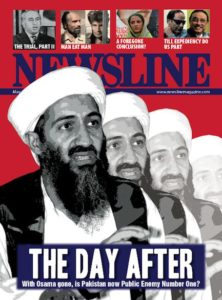 After bin Laden: The killing of the Al Qaeda leader on Pakistani soil has the media and armchair analysts discussing how Pakistan should redefine its relationship with the US and how this event re-stresses the need to implement a culture of accountability within the government and military.

Are Zardari and Gilani aware of the tirade of one of the PPP’s own, a certain Mr. Jamshed Dasti (of the fake degree fame) against Mukhtaran Mai on national television?

He called her “a dictator” who had colluded with western-funded NGOs to concoct a fictitious story of rape against the poor Mastoi tribesmen and minted millions in the process.

Ms Bhutto had warned Dasti to stay away from Mukhtaran’s case, when she was informed that he had been trying to influence it — a fact he denied — just as he did the fact that he was pressurising her to withdraw the case.

Going by the PPP’s track record, activists now fear that Dasti may just win a ministerial berth, like Senator Israrullah Zehri did when he defended honour killings in the Senate as being part of Baloch tradition when two women were buried alive in Naseerabad. Another PPP old guard, Mir Hazar Khan Bijarani continued to retain his portfolio despite presiding over a jirga sanctioning the feudal practice of vani.

The party of Ms Bhutto, who believed in and spoke passionately about women’s emancipation, is fast turning into a party of misogynists.

Alongside, one cannot but express dismay at the judgement of the Supreme Court that concerns itself only with the technicalities and fails to take into account the ground realities of a poor divorced woman from a rural background who is made to pay for the supposed crime of her 12-year-old brother by a jirga that has no legal sanction, where the entire police system reeks of corruption and the odds are stacked against women in general, where the prosecution is dysfunctional and a feudal system exists which perpetuates chauvinistic attitudes.

A judiciary that had raised hopes of a quick and more effective system of justice post the lawyers’ movement has concerned itself primarily with issues of the executive and legislature. And while it has pursued political cases with single-minded devotion and taken to task intelligence agencies, the government, the police and the prosecution for dragging its feet in presenting evidence, it appears not to have shown the same alacrity regarding Mukhtaran Mai.

The outcome of the case aside, the manner in which Mukhtaran Mai conducted herself, defied the odds, surmounted the obstacles and went on to become a beacon of hope for countless other victims of oppression by setting up a school that has a roll call of 800 students — among them Mastoi children — needs to be acknowledged and applauded.

But perhaps Jamshed Dasti and others of his persuasion would have preferred it if Mukhtaran Mai had jumped into the village well in Meerwala and ended her life.

The May 2011 issue of Newsline is on newsstands now. Get your copy today.