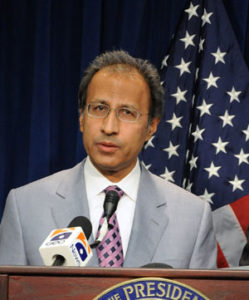 When it comes to Pakistan’s relations with the International Monetary Fund (IMF), one thing is now clear — there is no money for the country under any new or old programme until the government implements its promised reforms in which expanding the tax base and stopping wasteful expenditures remain the top items on the agenda.

This was perhaps the crux of the matter that emerged from Finance Minister Dr Abdul Hafeez Shaikh and his team’s recent trip to Washington where they met with top IMF and the World Bank officials in an attempt to salvage the government’s reputation, tarnished by its inability to keep its promises to these global lending agencies. The toughening of the IMF’s stance toward Pakistan was clear even in its programme note issued on April 7, a few days prior to Dr Shaikh and his entourage’s departure for Washington for a series of much-hyped spring meetings. The IMF, in unprecedented strongly worded language, said that the structural reforms “have been retarded or reversed in 2010 and 2011.”

The IMF, which approved a standby arrangement for Pakistan in November 2008 and augmented it in August 2009, imposed a technical suspension of its $11.3 billion programme in May 2010 after the disbursement of $7.6 billion due to the government’s inability to implement the reform agenda. Islamabad did manage to get a nine-month extension in the programme as a face-saving measure. However, its efforts to get the IMF programme back on track have so far proved futile because the global lending agency is not prepared to settle on anything less than practical steps.

The IMF’s April 7 programme note says that under its standby arrangement, Pakistan’s economy initially made progress toward stabilisation. “Macroeconomic imbalances shrank and inflation fell below 10% in mid-2009. More recently, however, the budget deficit has increased, reaching 6.3% of the GDP in 2009/10 (July-June), and inflation has been on the rise, recording 13% in March 2011.” The note further states that since June 2009, the authorities exceeded the budget deficit targets under the programme, among others, due to large additional subsidies for the electricity sector. “The overrun on the fiscal deficit target at end-June 2010 reached 1.7% of GDP.”

According to Finance Ministry sources there appears to be an increasing frustration among top IMF officials towards the government’s lack of willingness and commitment to the reform process.

The value-added tax (VAT) had effectively been torpedoed by political parties and various interest groups. The reformed general sales tax (RGST), which was supposed to be enforced at the start of the current fiscal year, has been delayed by one year. The untargeted subsidies on energy remain a constant drain on the national exchequer. The subsidy on electricity alone stands at more than 200 billion rupees during the current fiscal, while the haemorrhaging from public sector companies stands around 300 billion rupees. The fuel subsidy from November 1 to the end of February also stands at around 15 billion rupees. This has resulted in the widening of the budget deficit, slashing of annual development programmes, and increased bank borrowing, which not only has an inflationary impact, but has also crowded out the private sector from the credit chain.

The government’s measures to mobilise more than 50 billion rupees in March through three ordinances are deemed too little and too late. Even on this front, the government scrapped some vital measures under the pressure of vested groups.

Finance Minister Shaikh and his team have been unable to get rid of their lethargic and laid-back attitude, which has become a hallmark of their management style. They not only failed to convince their political bosses of the necessity of reforms, but have made little effort to build a consensus and advocate their case by proactively engaging various trade and business organisations, the media, and the opposition parties.

Sources say that in the Washington meetings, the IMF officials made it clear to Shaikh and his delegation that the resumption of the stalled programme remains linked to the implementation of reforms — for which the coming budget would provide a litmus test. An IMF team will be in Pakistan in May to engage Pakistani officials in the budget preparations. It will revisit Pakistan in July to review whether the government has been able to get the promised budgetary measures passed through the parliament — which has so far proved to be the main stumbling block in the reform process. Tax on agricultural income, enforcement of RGST and stopping wasteful expenditure remain top items on the agenda and the government will have to move on them and convince its allies and the opposition that they remain vital for the economy.

“Getting a new IMF programme was not on the table for discussion,” says a source close to finance minister. “We aim to get the stalled programme resumed because it is a matter of the country’s credibility.” Government officials say that remaining on track with the IMF is extremely important for Pakistan because engagement with, and support from, the global lending agency sends a positive signal to the foreign investors and the international community.

However, Pakistan’s finance team has not been able to win the confidence of IMF officials, who view their promises with increasing scepticism. Some officials on the Pakistan team are known for their anti-IMF stance because of their political beliefs and their participation in the discussions did not prove to be of much help in ironing out the differences with the fund, say government sources.

While IMF-bashing remains the favourite pastime of most leading Pakistani politicians and political parties, the fund should not be blamed for the country’s economic woes, which stem from the government’s myopic policies and its inability to take the right decision at the right time. This has hit the common man the hardest.

The government should focus on measures to boost growth, increase revenues including taking measures to tax the rich and the affluent and stop wasteful expenditures. That’s what the world, including the IMF, is asking Pakistan to do — and it makes sense.

Shockingly, in a country of more than 170 million people, less than 3.0 million are registered tax payers and out of them only 2.7 million are active tax payers. The country’s tax-to-GDP ratio remains one of the lowest in the world at a slim 10%, only ahead of countries like Afghanistan and lagging behind other regional countries, including Sri Lanka and India, which stand at a respectable 15% and 18% respectively.

As Pakistan remains in the vicious cycle of low growth and high inflation with widening budget deficit for the last three years, the government appears clueless on how to put the country back on the high-growth trajectory for which low and stable inflation and low interest rates remain a must.

But for a government, which wasted the first three years of its term and hesitated to take tough decisions on the economic front, would it be prudent to expect that it would be able to bite the bullet and initiate reforms at the end of its term when political pundits are already setting eyes on the next elections.

Few believe that the government will be able to go for any meaningful reforms. But under pressure from global lending agencies and world powers, it can’t just sit and wait either. The era of free money and free lunches is now over. How the government balances the demands of popular politics with the demands of the economy remains a moot point. The budget for 2011-2012 will reveal how the government sets its priorities and manages the political dissent of its allies and the opposition. The government’s record in this regard is not exactly encouraging, but it would make sense even for the opposition parties to help push the reforms through now when the Pakistan Peoples’ Party (PPP) is in power so that they can reap the benefit of the tough decisions two to three years down the road. But will sanity prevail and will the opposition stop opposing reforms for their own narrow vested interests?