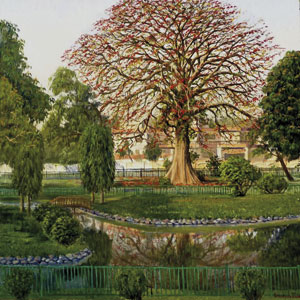 Being accustomed to Karachi’s grey and dusty landscape, the immediate reaction to Shahid Jalal’s work is disbelief. Then, having left one’s cynicism at the door, one walks through the gardens grown by Jalal’s brush and is transported to tranquillity.

Although recognised in Lahore as a seasoned artist, Jalal has showcased his work in Karachi only once before. This series of impressionist paintings titled and inspired by Linear Park and Lawrence Gardens, Lahore, were a fresh addition to the usually intense and dark works exhibited by our local artists. The show was practically sold out on the final day of the exhibition — as proof that Karachi’s connoisseurs, weary of a parched landscape, were captivated by Jalal’s work.

Jalal’s textured strokes act as tour guides, pointing out all his favourite spots in these two parks. Thus, the paintings are of branches reaching out of well-formed trees, bright flowers blooming, silent reflections swimming in the Lahore Canal and the details of erect, right-angled man-made structures.

Jalal’s landscapes are unique in that the viewer isn’t just a voyeur, but is drawn right into the composition, almost entering the various portals depicted and treading the painted pathways and bends. In canvas after canvas, the viewer strolls through the gardens, stopping to watch creeping shadows, telling the time by looking at the sky (usually early morning), noticing the leaves rustling on the ground, discovering the shapes of light that cut through the canopy of trees, and wondering if the silhouette is an approaching stranger. 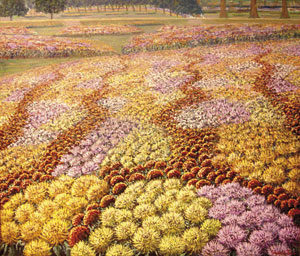 Jalal’s gardens exude a sense of familiarity, almost a belonging, as if one has been visiting them for years; completely aware of which scenic route to take and which tree’s shade is the coolest to sit beneath. In all of his paintings the focal point emerges effortlessly, letting everything else fade. The painting of a banyan casting its immense shadow over ‘The Raj Offices in the Early Morning,’ reminds one of the grandeur and enchantment of this tree, which is rarely seen in local art. Similarly, the ‘Amaltaas Trees on the Hill,’ lined along a path, are heavy with yellow blossoms that serve to keep the viewers company as they proceed. And the ‘Chrysanthemums in the Park’ bloom in pastel shades, gently fading into a vast field of spheres and hues in the distance. ‘The Avenue of Marigolds’ is a vivid portrayal of the common gainday ke phool. It is strange to see the marigolds rooted, as if asleep, under the shade of trees. And then one comes across ‘The Bend in the Canal’ and pauses — the stream of water reflects leafy trees with hints of yellow flowers, which look peach in the shade — a tantalising vision of serenity in the midst of busy city life.

The last painting visited is of the grand ‘Simbal Tree on the East Side’ of the quaint garden. One gets the feeling of having walked around the park, and returning to where it began. There is a bridge, familiar now, from the other paintings. The tree stretches out, wide and tall with defined branches and flowers, speckled like little red kisses; a few of its branches lie in a reflection in the stream.

The artist has a way of communicating his peaceful state of mind through his work. His brush is patient. It has waited for hours to find the perfect light, and then painstakingly translated scenes from known locations into immortal images.