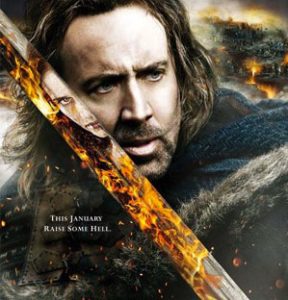 A die-hard action-movie fan once said to me, “If a movie has 100 people die before the opening credits that means it will be a hit!” One hundred people do not die before the opening credits in the The Season of the Witch, but it more than makes up for that in the first half an hour. Battles are fought by knights in armour, towns are pillaged, scores are beheaded, there are dust storms, starving children and disease — none is spared. Despite demons, dungeons and sorcery The Season of the Witch still manages to disappoint, even as a pure entertainment flick. The movie appears to be callously put together, with dumb wit remarks, poor acting and misplaced bravado.

In this 14th century movie, Oscar-winner Nicolas Cage (Behman) and his sidekick, Ron Perlman (Felson), two macho crusading knights, decide, after brutally killing dozens, to abandon “their duty to the church.” The moral imperative: one battle witnessed by them in which women and children are massacred. The pair, fast friends, embark on a journey back home only to stumble upon a town where the black plague has devoured everything. Blissfully unaware of this catastrophic disease that by now has reached colossal proportions, the duo form a band to take the witch (Claire Foy), accused of engineering the plague, to the holy monasteries for a fair trial. A devout monk, an adolescent aspiring knight and a swindler accompany them through treacherous terrain, but Cage in his nonchalant ways seems unperturbed even during a scene where wolves attack the band, leaving one band member dismembered. With 21st century slang in a 14th century movie, the dialogue is completely out of whack (“Let’s the get the hell out of here”) and it seems screenwriter Bragi Schut was going for commercial viability, not authenticity.

After HBO’s Boardwalk Empire, for Stephen Graham — playing the charlatan in the band — The Season of the Witch is a blip in his career. Cage’s performance may have caused us to overlook more convincing performances by Claire Foy and Ulrich Thomsen, but all in all, after Gone in 60 Seconds, director Dominic Sena has once again failed to meet expectations.

This movie review was originally posted under the headline “Misplaced Bravado” in the May 2011 issue of Newsline.