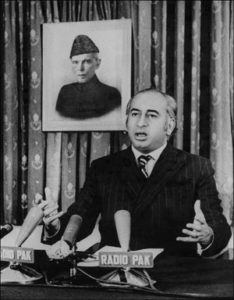 The government’s motive in referring the Bhutto trial to the Supreme Court is pretty obvious: the PPP high command wants to benefit from Bhutto’s refurbished image in its present struggle for survival and to improve its prospects in the next general elections. Some of the party leaders could also be feeling strongly about the need to get Mr Bhutto’s name cleared. But has anyone considered the consequences of this initiative?

Political leaders and their parties generally do not seek reviews of cases instituted against them and decided on political considerations. They have usually viewed their conviction and punishment as a reward for their courage in upholding their political rights.

During the subcontinent’s long struggle for freedom, thousands of political leaders and activists were convicted by courts, sentenced and tortured in prison. Quite a few were hanged. Nobody has heard of any move to have the court verdicts against Gandhi, Abul Kalam Azad, Mohammad Ali Jauhar, Hasrat Mohani or Bhagat Singh reopened.

However, a number of cases, from the trial of Bahadur Shah Zafar to that of Bhagat Singh, have been scrutinised in well-researched studies. Nearly all of these cases have been declared as politically motivated trials. These studies have only reinforced the popular view that the accused did not, and could not, receive a fair trial because the courts were biased against them or they were victims of arbitrary laws made to serve the interests of the rulers and not of justice. Even without these studies the people believed that their heroes had been wrongly punished.

That Mr Bhutto was tried on a criminal charge, and not for a political offence, makes no difference. In most of the political trials in history, attempts have been made to cover up political vendettas with indictment for a criminal offence. Everybody knows what the apartheid regime had against Nelson Mandela, regardless of the criminal charges against him.

In short, wherever political victims of the law’s abuse have been exonerated by their people, judicial reviews of their cases have been considered unnecessary.

That a very large number of people in Pakistan believe that Mr Bhutto did not receive a fair trial is no secret. The millions of people who have voted for Bhutto’s successors during the past two decades share this conviction. Many others who do not support the PPP also agree with them, and so do a considerable number of foreign experts.

When the Lahore High Court sentenced Mr Bhutto to death, quite a few journalists and commentators, who were not afraid of the Zia regime, described the verdict as a political judgement. Foreign opinion was equally forthright. “The reality is that this trial was a political trial, and that

Mr Bhutto’s execution would be a political act with momentous political consequences,” wrote the London Times. A commentator in Spectator noted “indisputable reason to categorise his (Mr Bhutto’s) trial as a political trial, inquisitional in character, vengeful in intent. The court’s judgement is what was widely expected — what was feared by his friends, hoped for by his enemies, and virtually guaranteed under the influence of an increasingly authoritarian military regime.”

Similar conclusions have been reached by Justice Rajaratnam, a former chief justice of Sri Lanka, in his book, Judiciary on Trial, and the highly acclaimed two-volume study, The Bhutto Trial, by Justice (R) Syed Afzal Haider.

The arguments relied upon by these experts and observers were: General Zia had resolved by the end of August 1977, that in order to save his own neck he had to break Bhutto’s. This was further confirmed when Mr Bhutto was denied trial by a sessions judge, and also by the manner in which Justice Samdani was penalised for allowing Mr Bhutto bail, the way the Shafi-ur-Rahman tribunal report was cast aside and ‘like-minded’ judges were put in control, first by making Maulvi Mushtaq Husain the acting chief justice of the Lahore Court, then vide his decision to reconstitute the bench, and finally by the changes in the Supreme Court. Zia himself took the decision to grant a pardon to Masood Mahmud, head of the Federal Security Force, who later turned approver. Neither the chief justice of the Lahore High Court nor the chief justice of the Supreme Court concealed their animus against

Mr Bhutto. Indeed they seemed overly keen to demonise Mr Bhutto apparently in a bid to ingratiate themselves with the dictator. The trial was not open. Excessive reliance was placed on the uncorroborated testimony of a co-accused. Approvers’ statements were obtained on the strength of unlawful promises (not fulfilled, except in a single case), and Justice Anwaral Haq did not treat his brother judges fairly.

The only thing that went in favour of Zia-ul-Haq and his fellow conspirators was that during 1975-77 Mr Bhutto’s political rivals had mobilised powerful groups in the country who wanted him liquidated and had no scruples about the means they used. That to an extent they had been helped by Mr Bhutto and his associates was immaterial — at least as regards the court proceedings.

Many therefore believe that the government should have seriously pondered the consequences of their reference to the Supreme Court. As things stand today, the government has opted perhaps for a no-win situation. Especially after its disastrous choice of the leading counsel, Babar Awan.

Only two outcomes are possible: the reply to the reference could either be against the government or in its favour. A third option, namely, a finding that since the questions are political in nature the court would not like to express its opinion, is most unlikely.

If the decision is adverse to the President, the earlier verdicts will acquire greater respect and credibility than they have hitherto enjoyed. Some of the people who thought that Mr Bhutto was wrongly hanged might be persuaded to review their opinion. In that case, the government will be unable to cash in on the Bhutto card. The danger of something like this happening has been enhanced by this government’s proven capacity to lose friends and make fresh enemies.

Conversely, if the decision is in favour of the government it will, at best, win a propaganda point. Mr Bhutto’s judicial rehabilitation is unlikely to wipe out the political disasters the government has invited upon itself. Even the most committed PPP followers cannot raise the slogans that had helped Mr Bhutto’s ride to the zenith of power. Besides, the custodians of Mr Bhutto’s mantle need to justify their entitlement to their inheritance. It will be wrong to presume that the vested interests that wanted Mr Bhutto dead in 1978-79 will spare any effort to resist his resurrection.

In the final analysis, the way to recapturing the glory of the Bhutto days lies through the hearts of the people and not through the portals of a judicial sanctum.