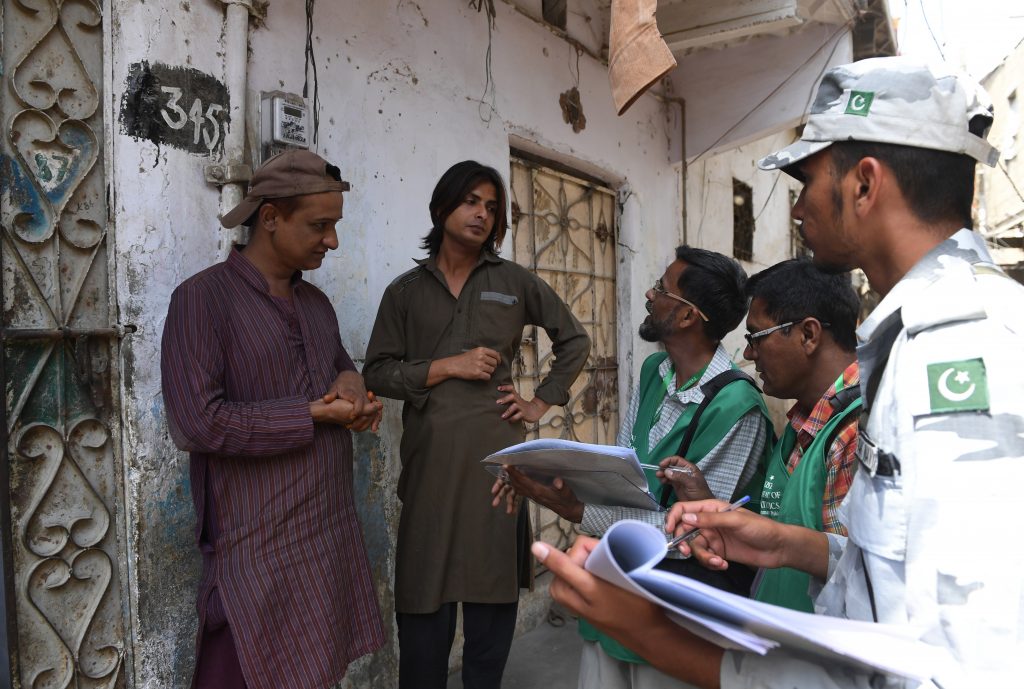 After a great deal of dithering by two successive governments, the sixth Population and Housing Census finally saw its onset in March, under a cloud of scepticism: political parties continued to accuse each other of manipulating statistics to gain political leverage.

In a Supreme Court hearing of the suo moto notice regarding the delay in holding a census, the federal government forewarned that the provinces could manipulate the process if the armed forces did not get involved. Sindh and Balochistan-based parties also expressed their concern regarding various aspects of the headcount and house-listing process. While none of the political players in Sindh are opposed to the census, they have been desperately trying to highlight their concerns, in an attempt to improve the process. Sindhi nationalist groups, community-based organisations and other social platforms have conducted a mass-awareness campaign across rural and urban districts in Sindh. Owing to the demographic changes and internal migrations, there are concerns that Sindh’s indigenous population could become a minority on its own turf. According to experts, such apprehensions carry weight because critical evaluations have revealed that more than five million people in Sindh were left out of the 1998 census.

The ruling Pakistan People’s Party (PPP), and major stakeholders in the urban districts of Sindh, such as the Muttahida Qaumi Movement Pakistan (MQM-P) have knocked on the judiciary’s door. From the PPP, Senator Farhatullah Babar filed a petition in the Sindh High Court, while the MQM-P has approached the Supreme Court of Pakistan through a joint petition signed by 11 members.

It was former Chief Minister Qaim Ali Shah who championed the cause, and he was the most vocal in the demand for a census in the meetings of the Council of Common Interests (CCI). He termed it a matter of life and death for Sindh. The leadership of the Pakistan Muslim League — Nawaz (PML-N) has still not developed the ability to reach a decision through institutional processes, despite it being a constitutional requirement. Whereas the federal government is expected to call meetings of the CCI on a quarterly basis, these have not been held as required in the PML-N’s current tenure. The chief minister of any province has the authority to call a meeting of the CCI, but Qaim Ali Shah complained that despite several requests from him, the meeting had not been held. In the CCI meeting last year in March, the census was put on the agenda after much hesitation, but only under the condition that it would not be held without the help of the armed forces. They meanwhile, happened to be busy with Operation Zarb-e-Azb, and could not provide the necessary support. Thus, it was concluded that the census should be delayed even further. Then came the suo moto notice of the delay from the Supreme Court last year, and the federal government was forced to give exact dates, and make arrangements for holding the census in March 2017. 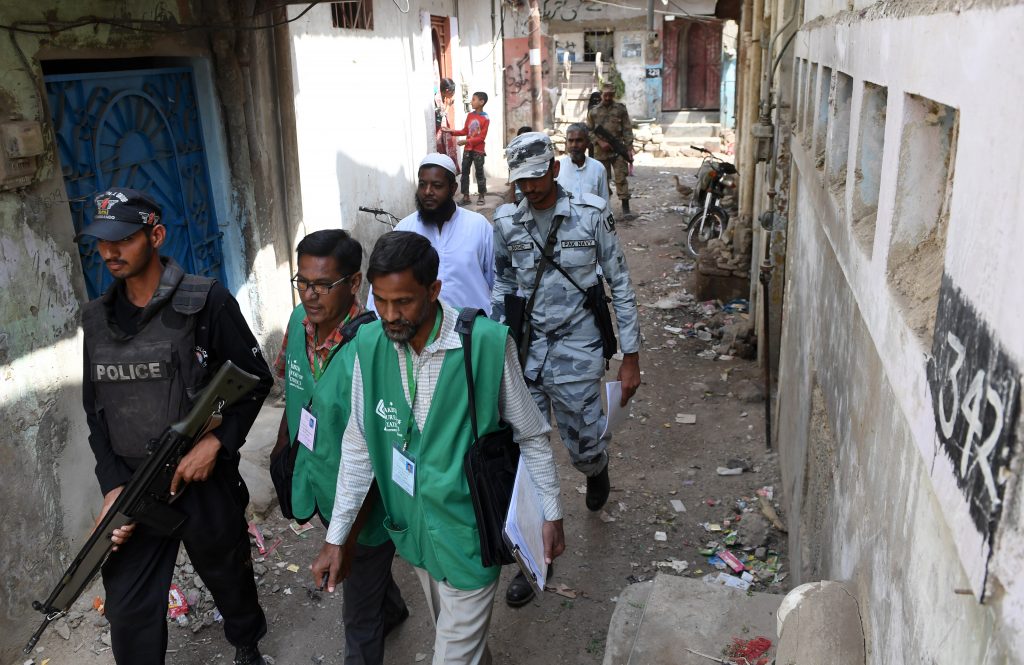 Pakistani soldiers escort officials from the Pakistan Bureau of Statistics

The Sindh cabinet came to know, through a briefing by NADRA officials in January 2017, that 30 per cent of the adults in Sindh do not possess computerised identity cards. The chief minister instructed NADRA officials to accelerate the process of issuing CNICs, and to send more mobile teams for this purpose, to the remote areas, but the paucity of time made it impossible to complete this process. Thereafter, the federal government agreed to the chief minister’s demand that in the case of those who did not possess CNICs, any document of identity should be accepted. Murad Ali Shah has also established a census complaint cell, so people can directly lodge their complaints regarding the census operations. He has also asked the federal government to release some of the census data, such as the number of people and houses in particular blocks, as withholding this information would rouse people’s suspicions. Another aspect of the census debate in Sindh was the demand from all those living in the province, that they be allowed to list Sindhi as their mother tongue. The demand came from Sindhi nationalist groups, and was later echoed by others. Sindh United Party leader, Jalal Mehmood Shah said that all those living in Sindh were Sindhis; therefore, every one of them, whatever language they spoke, should mention Sindhi as their mother tongue to prove that their loyalty was with this province. In a video message on social networking sites, Baseer Naveed, a prominent journalist and member of the Asian Human Rights Commission, echoed his support for this demand and asked all members of civil society to list Sindhi as their mother language, regardless of their ethnicity. While one can empathise with such demands on account of the fears induced by demographic shifts, the whole idea of a census is to gather facts, to obtain an accurate picture. Asking people to fill in the wrong details to support a political standpoint defeats the whole purpose of the census.

In a speech in January, Maula Bux Chandio had also asked the Urdu-speaking inhabitants of Sindh to express their association with the province by listing Sindhi as their mother tongue in the census form. This demand was vociferously opposed by MQM supporters whose political premise is built on ethnic lines. PPP members gave another twist to this mother language debate when provincial minister Manzoor Wassan, in a cabinet meeting, said that only six religions and 10 languages were reflected in the census form, while Zoroastrians and their languages, such as Gujrati and Kathiawari, were not mentioned. The chief minister said that Gujarati was the mother tongue of the father of the nation, Muhammad Ali Jinnah, and should have been included in the census form. He said that he would take up this issue with the federal government.

As might have been expected, the debate then went down the familiar path of the rural-urban divide in Sindh, and resuscitated the age-old narrative which serves the purpose of two major political players — the PPP and the MQM. Each party invokes fear of the intentions of the other among their support base. The MQM has been promising its supporters that the census, if conducted in a proper manner, will increase their representation in the assemblies, as the existing composition is allegedly an inaccurate reflection of reality. Certainly, constituencies in Karachi, in terms of the number of registered votes and section of the population they represent, are too big and unwieldy, as compared to other parts of Sindh, or any other city in Pakistan. The MQM vows it will get an Urdu-speaking chief minister elected, while spewing prejudice through the mantra-like assertion, “Now you won’t be ruled by a feudal coming from interior Sindh.”

This rhetoric serves the MQM, old and rechristened, while reinvigorating the PPP, which poses as the guardian of rural Sindh despite its lacklustre performance and poor track record.

The PBS has been at the centre of controversy since its inception. Its legal status is questionable, and it has been run for years without any fixed rules or procedures. It violates the criteria set by the General Statistics (Reorganisation) Act 2011 when making appointments for different positions. The composition of its governing council is not proportionate to the weight held by each province. To top it all off, its track record in the last six years has been dismal. In 2011, when the PPP government decided to conduct a census, the newly-established PBS was tasked with conducting a house count across the country. The manner in which this was conducted led to objections, and the statistics were deemed controversial due to reports of anomalies in Sindh, Punjab, and Balochistan. The Chief Census Commissioner, Habibullah Khattak, acknowledged these discrepancies, and the questions that were raised over the veracity of the entire exercise lead to a delay of the process. Khattak criticised the lower staff, while political parties blamed the provincial government. Interestingly, none of the higher officials of the PBS were held accountable for this negligence and waste of funds.

In September 2016, Assistant Attorney, General Waqar Rana, submitted a fresh report on behalf of the PBS during a suo moto hearing by the Supreme Court on the delay of the census. The report stipulated that the house-listing operation held in 2011 was manipulated to exaggerate the census results in favour of particular ethnic groups, and to benefit political parties that relied on ethnic divides for political support. The Population and Housing Census data forms the basis for political representation at the centre and in the provinces, and determines the share in national resources. “These factors point to the interests of the provinces and ethnic groups in the census and how they would like to influence the process to their advantage,” stated the report, suggesting that only the army could ensure transparency.

In the end, PBS, an institution that was established for the sole purpose of conducting the census had to concede that it was not capable of working independently. It had to shift the burden onto the shoulders of another institution — the armed forces.