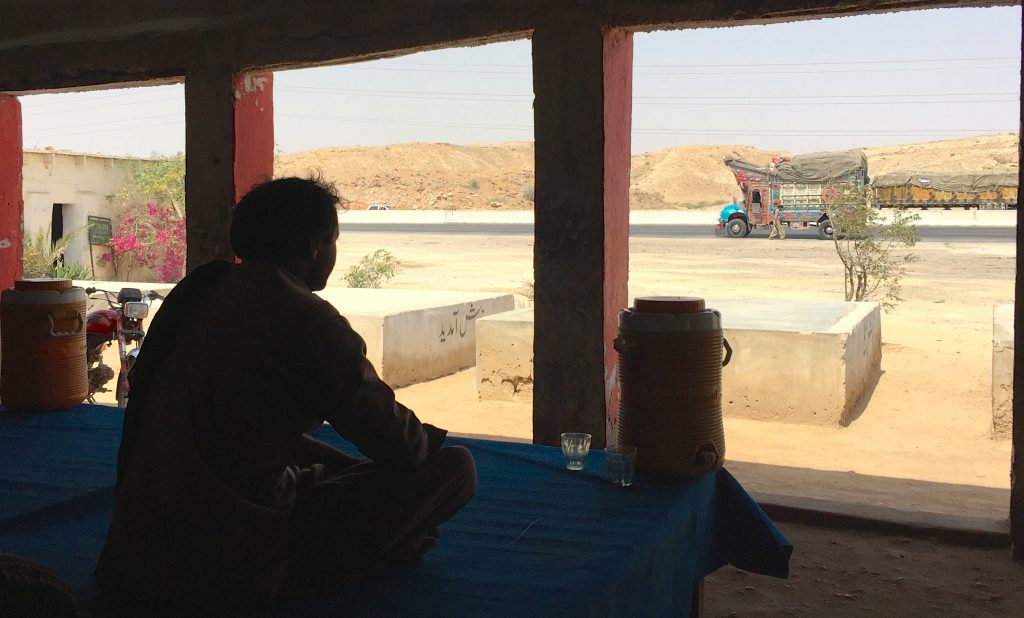 Rab Nawaz Palari’s tea shop overlooks a section of the M-9 motorway several miles west of Nooriabad. It is a solitary unit, unlike most watering holes for truckers on this route, which share a compound with a gas station. Thus, the only sound heard at this breezy outpost is of the movement of high-speed vehicles, recurring like waves on a beach. Although it may look like little could go wrong in this uneventful desert sprawl, there is much that is brushed under the tarmac.

“When the motorway was being laid, temporary diversions were created alongside it to enable the movement of traffic,” explains Palari. “But these diversions were uneven, badly built and caused accidents,” he continues. “Sitting right here, I witnessed numerous such accidents, in some of which lives were lost.” More disturbing, Palari’s vantage point accounts for but half a kilometre of a 136-kilometre motorway-to-be.

The process of turning the four-lane Karachi-to-Hyderabad Super Highway into a six-lane motorway began on September 17, 2015. The National Highway Authority (NHA) outsourced the project on a build-operate-transfer (BOT) basis to an offshoot of the Frontier Works Organisation (FWO), namely Superhighway Construction Operation and Rehabilitation Engineering (Pvt) Limited. Already a sizeable amount, the cost of the project — Rs. 36 billion — does not take into account the price citizens have paid for it with their peace of mind, their time, even their lives.

The NHA’s General Manager for Sindh South, Tufail Shaikh, explains that while it helps to have alternate routes during the construction of any major artery, in the case of the M-9, there is no other road or highway nearby. Temporary diversions, created during the construction of the motorway are the only alternative. “No doubt, these diversions are not as well maintained by the FWO as they should be, despite the fact that the National Assembly has notified the FWO of this on many occasions,” he points out, adding, “But they have their own way of doing things.” According to Shaikh, since the diversions are temporary routes, they are not given much priority. However, a senior FWO official who is overseeing the Karachi-to-Hyderabad stretch of the M-9 project, provides reassurances that “the diversions were a problem in 2015 and 2016, when there were many of them, but now they are fewer in number.” He explained that each diversion was in use for a maximum of two weeks, after which that portion of the road would be completed and new diversions would be created wherever the construction was taking place. “We have carpeted all the diversions with water bound macadam,” he says, concluding that driving on them is now “comfortable.” 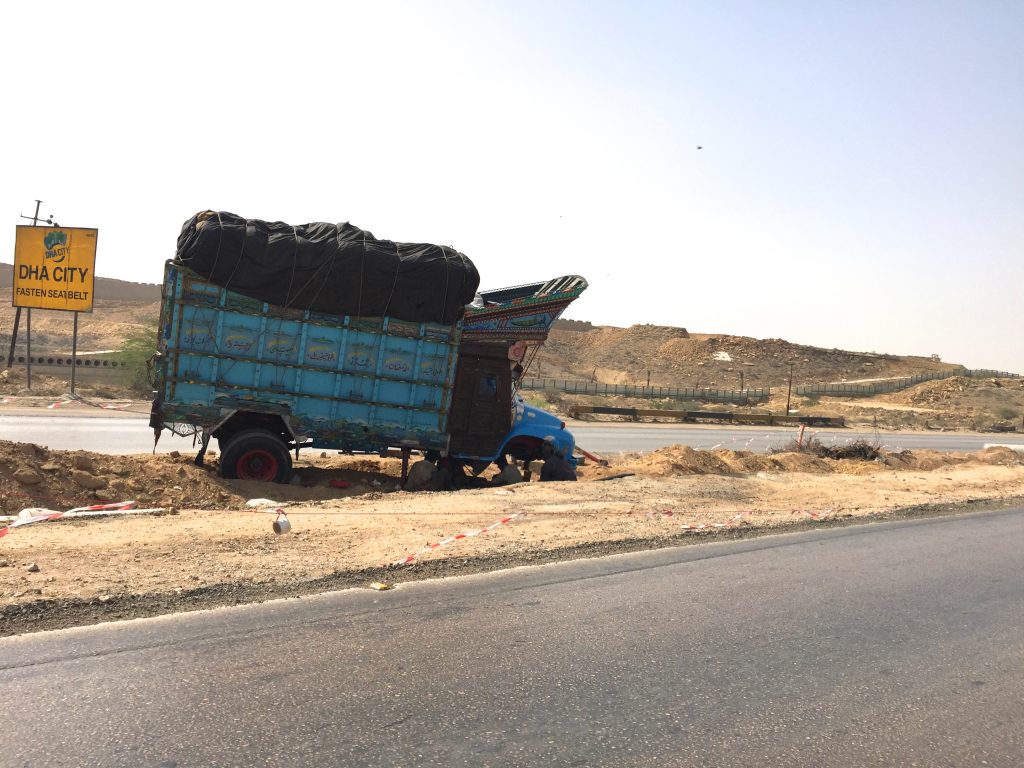 A truck stuck in the depression of a median where a New Jersey barrier is to be installed.

However, the problem with macadam surfaces, as is evident in the diversions, is that they are easily undone by heavy traffic. This is why they are now almost never used in the United States. In the case of the M-9, it is particularly hazardous if container trucks, tankers, coaches and smaller vehicles are moving alongside one another on such an uneven surface. Once the crushed stone mixture is loosened, dust rises and decreases visibility. Those who have travelled on the M-9 at night in the past year-and-a-half will recall the hellish off-road experience of driving alongside container trucks through a thick layer of dust illuminated by headlights. They may also recall various vehicles attempting to create their own ‘diversions’ in the darkness, desperate to figure out a way forward.

Work on five out of 11 bridges has been completed. On one bridge that overlooks an arroyo, one-and-a-half lanes out of three have been cordoned off entirely, creating a bottleneck. A welder of the FWO installs expansion joints in the bridge wearing a pair of sunglasses and a shemagh scarf. “Every time a car attempts to overtake another, a traffic jam is created,” he discloses, requesting not to be named. At other sections, where the median of the dual carriageway is being installed with a New Jersey barrier, more than a lane is cordoned off. In such instances, there is no diversion.

It is difficult to ignore the glaring irony of the massive inconvenience caused to the public by the construction of something that is essentially meant to make their lives easier. The site of solar-powered CCTV cameras installed on a route where vehicles rattle along at dangerously close proximity, sums up the nature of ‘development’ in Pakistan: while basic safety standards remain unmet, a faÃ§ade of technological advancement is displayed. These cameras, explains the senior FWO official, “are being installed at one-kilometre intervals along the motorway and will provide live surveillance to a joint control room of the FWO and the National Highways and Motorway Police, in Nooriabad.” Emergency telephones are provided underneath the cameras.

The drive from Karachi to Hyderabad normally takes an hour-and-a-half. But in the last year-and-a-half, it has taken much longer. Families travelling in public lorries or in their own cars, have seen a once exciting journey to their ancestral village turn into a miserable experience. “On one occasion in 2016, it took me eight hours to drive from Karachi to Hyderabad,” recalls Naeem Mughal, Director General of the Sindh Environmental Protection Agency (SEPA). “But imagine what those passengers who travel by coach from Peshawar to Karachi must be going through. The last leg of their 20-hour journey must be hell. Not to mention all the dust emissions inhaled by those travelling in buses and lorries with open windows.” Mughal, however, acknowledges that the diversions are now not as “crude” or as extensive as they were last year. 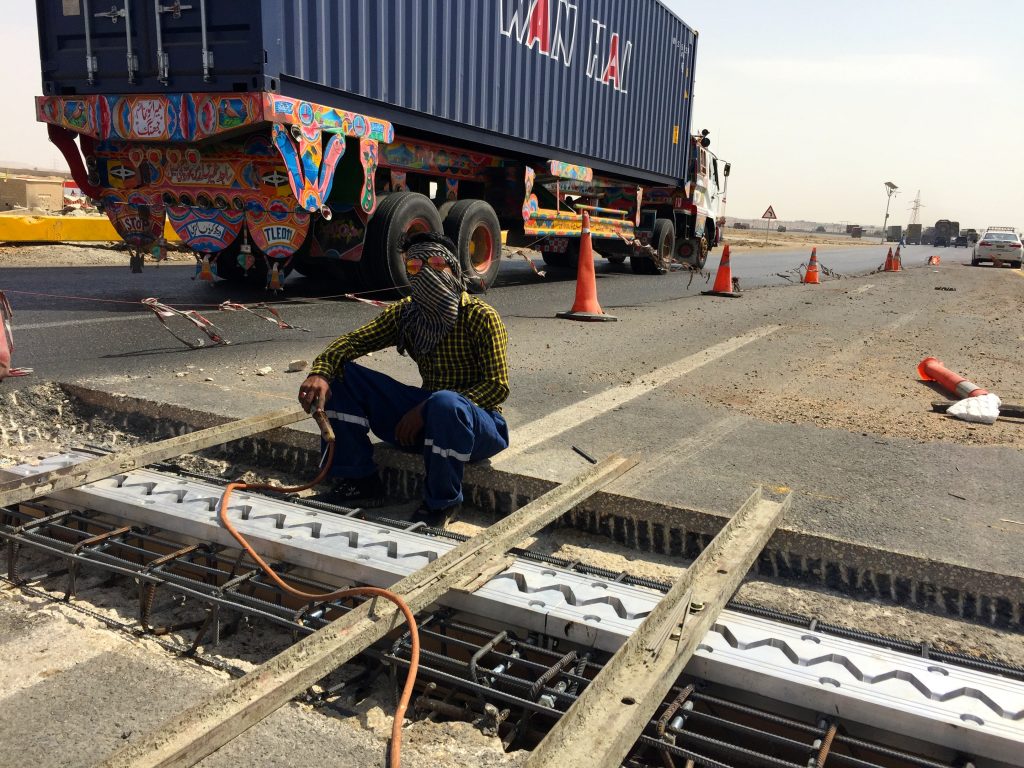 As a welder works on a bridge, it is partially cordoned off, creating a bottleneck.

According to a senior SEPA official who requested not to be named, data obtained from the Jamshoro and Nooriabad police stations for the period September 17, 2015, to October 2016, shows that almost a hundred people died in accidents caused by the diversions, while many more were injured. “There was no contingency plan, nor any first aid provisions,” he laments. In the light of this revelation, the trauma centre established in Dumba Goth on October 20, 2016, seems almost like a guilty afterthought. 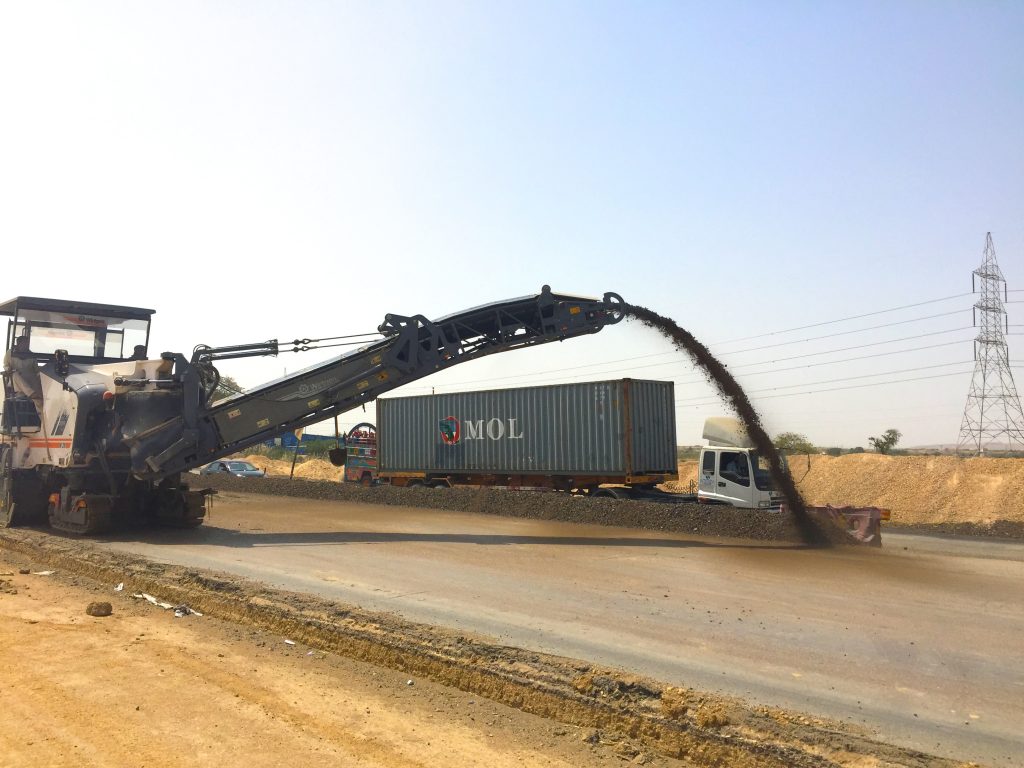 Below: A milling machine pouring asphalt in close proximity to moving vehicles.

According to an Environmental Impact Assessment (EIA) study conducted by the Environmental Management Company Pakistan prior to the initiation of the project, the average annual daily traffic on the M-9 is 20,000 vehicles per day. The EIA report clearly states that one of the core principles on which the FWO devised its Traffic Management Plan, was to “give constant attention to roadside safety.”

“The fact that the Super Highway is a main artery, the diversions should have been proper roads,” argues the SEPA official. “At times there was no visibility beyond a few feet, due to dust emissions. But the FWO did not take any measures to improve conditions, despite being notified by SEPA repeatedly. FWO officials told us that the diversions were in this state due to overweight traffic coming from the harbour, from November 2015 to January 2016 — but this is no excuse. They said that after 75 kilometres of the motorway would be completed, the public’s misery would be reduced.” According to the senior official of the FWO, the diversions are now sprinkled on a weekly basis using a water bowser.

“They seemed to be working in a great hurry,” says the SEPA official. “At the core of it, are management and political issues.” According to the official, the federal government is attempting to squeeze as much political leverage as it can out of this project. Perhaps this is why Prime Minister Nawaz Sharif held an ‘opening ceremony’ on February 3, 2017, despite the fact that 61 kilometres of the motorway have yet to be completed. Perhaps this is also why the project is expected to be completed three months ahead of schedule, in December 2017, well before the general election. 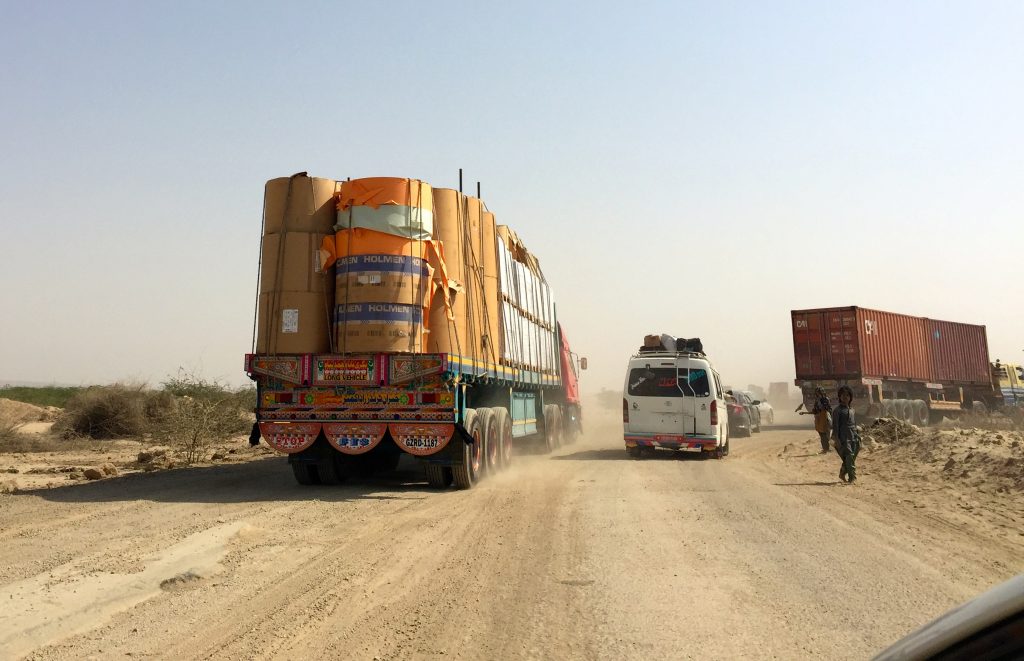 A diversion on the north side of the M-9. Its uneven surfaces prove dangerous for traffic.

Palari’s tea shop is but one of many rural settlements that lie on the M-9’s earmarked path — i.e., its right of way. On the north side of the motorway [Karachi-to-Hyderabad], the right of way is 75 metres, while on the south side it is 130 metres. According to the EIA report, “Ninety-five per cent of the affected structures on both sides of the road are unlawful.” This space is designated for the construction of two service lanes on either side of the motorway. The M-9 project has been in the pipeline since 2006, but was delayed largely due to resistance by those who had allegedly encroached on the right of way. “This is why the project was handed to a military organisation like the FWO,” explains the SEPA official. “It was felt that only they could move the people settled along the highway.”

In a charred kitchen at the back of the tea shop, Palari pours three cups of a fresh brew. “FWO officials stopped by and asked me to either cough up Rs. 4 million or to move out, as this is allegedly government property,” he says. But his family bought the property seven years ago. Although he hasn’t heard from the officials again, he thinks, “we will probably have to end up moving.”