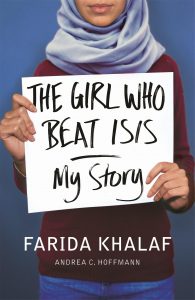 The emergence of the Islamic State of Iraq and Syria (ISIS)changed many lives. Back in 2014, the terrorist group seemed invincible as it conquered land after land, reaching the outskirts of Iraq. August of that year became a brutal struggle of life and death for many, and one of these was an 18-year-old Yazidi girl who lived to tell the tale. The Girl Who Beat ISIS is a first person account of this teenager’s story, penned under the pseudonym ‘Farida Khalaf’ to protect her identity.

Farida had a normal life like any other teenager her age. Living in a village high in the mountains of northern Iraq, Kocho, with her siblings and parents. She had simple dreams and aspirations. She wanted to become a math professor and teach in her village, living close to her loved ones. But an ISIS attack in the summer of 2014, changed her life forever.

In the eyes of the jihadists, Farida and her Yazidi village of 1,700 inhabitants, who swore allegiance to Melek Taus, the central figure of the Yazidi religion, were “devil worshippers” and thus could only either be killed or enslaved. So when ISIS fighters captured the area, the only choice the villagers were given if they wanted to live, was to convert to Islam. They refused. “Faith is the most important thing in our lives,” said Farida’s father. What followed in the face of this rebuttal is an account of torment, atrocity and the brutal picture of prisoners under ISIS rule.

While all the men, including Farida’s father and brother, were soon killed by ISIS fighters, Farida and the women were taken prisoners. From the opening chapters of the book, Farida draws us in with the breathtakingly evocative imagery she creates about her life before and after the jihadists’ invasion. She describes her small and content livelihood, which turned into a terrifying seclusion and led to her twice attempting suicide. Finally, the civil war that had once seemed distant to Farida, became a brutal reality, as she, along with other girls of all ages and sizes, was sold like cattle in the marketplace. Thereupon, the author recounts, how (nothing more than sex slaves), the women were passed from one terrorist to another.

Turning a series of interviews with Farida into a first-person narrative, German author and journalist Andrea C. Hoffmann has co-authored the nerve-wracking and gripping story of Farida’s ordeal. Farida’s narration of events portrays the gruesome life of ISIS captives and delves into the emotional trauma undergone not just by Farida, but also the other prisoners.

When Farida arrived as an unmarried young girl in Raqqa, the self-proclaimed capital of the ISIS caliphate, to be sold in the markets, she couldn’t even begin to conceive the reality that awaited her. “Neither Evin (another girl taken prisoner), nor I, had a precise idea of what [rape] actually meant,” she recalls. “All we knew is that we mustn’t, under any circumstances, allow them to touch our bodies. If we failed to prevent them from doing that, our family would be dishonoured.”

But their worst fears were realised. And in addition to rape, they were starved and beaten. The only solace and comfort Farida found was in knowing that her friend Evin, who also lived through the atrocities, was with her, and together they hoped to once again be reunited with their families. But for Farida, that hope did not translate into a silent acceptance of her circumstances. She refused to give up on plotting an escape.

And along with the terror of her ordeal, Farida also documents glimpses of the normalcy she witnessed under ISIS rule. The same market she was sold in also had ordinary shops, selling everything from snacks to football shirts. And even within the confines of her captivity and behind locked doors, where she, along with other girls, was forced to pray, she met people with stories to share, and even some ISIS fighters who confessed they were only following the jihadist agenda for fear of their lives.

Among these people was the Kurdish people-smuggler who helped Farida escape, along with four other girls, including Evin, in return for money. And soon she was reunited with the remains of her family in a refugee camp.

But her miraculous escape from terror led to more psychological torment: she was now judged harshly by the traditional Yazidi people in the camp for her inability to escape rape. Stigmatised and feeling guilty for bringing dishonour to her people, Farida struggled to overcome her past, and finally found asylum in Germany.

The Girl Who Beat ISIS is a testament to Farida’s awe-inspiring courage in the face of imprisonment by today’s most feared enemy — as much as it is catharsis for the victim.