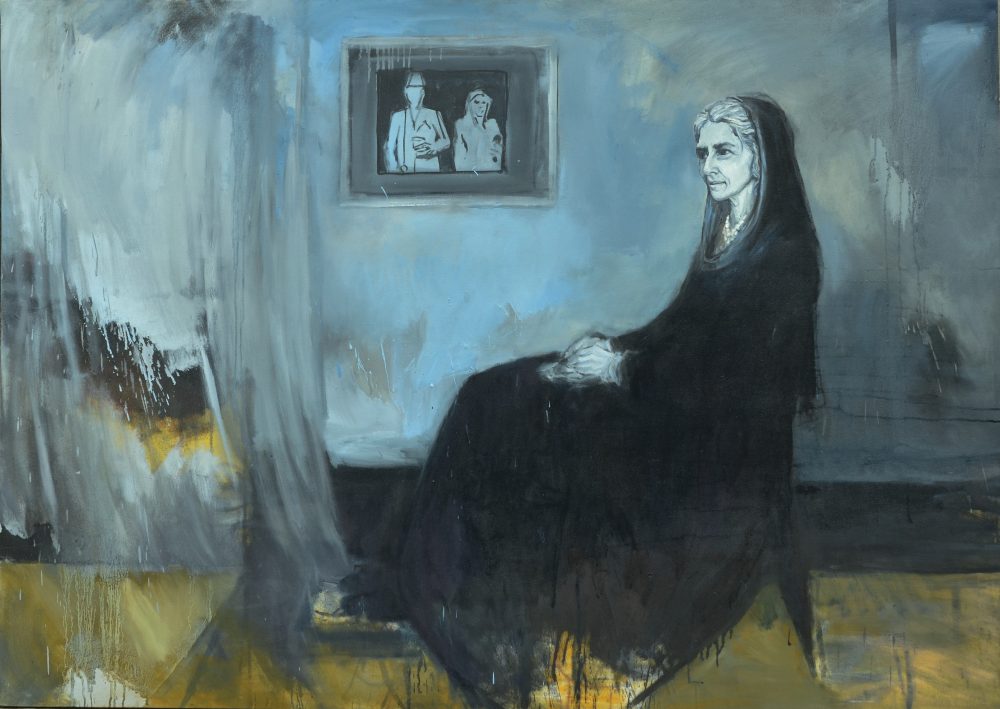 Zahid Mayo is a deeply reflective artist. His wry musings on humanity are expressed in paintings with strong narrative themes.

The title forms the first line of a poem written in Punjabi by Mayo. It is included in the brochure which accompanies the show, and it casts important light on his artistic inspiration. In the poem, Mayo invites the unfamiliar inhabitants of other people’s works into the threshold of his own imagination. They are invited to interact with his stream of consciousness as welcome guests. The invitation takes outward form in painting which includes appropriation of iconic imagery from the works of other artists. However, Mayo has engaged with appropriation for the first time, as a challenge rather than as a pursuit of a popular trend. It is a self-limiting boundary within which he develops his ideas.

Mayo also speaks of a vision of Adam and a silently weeping Eve in the poem. This vision is translated into the painting titled ‘Adam-o-Mulk-e-Sham.’ Three central figures dominate the composition. They are renditions of Adam and Eve and the murdered Abel as portrayed in William Adolphe Bouguereau’s painting, ‘The First Mourning,’ (1888). This intensely archetypal portrait of the interlocking of violence and pathos is painted in blue tints in Mayo’s version. Besides altering the colours from the original Bouguereau version, Mayo also alters the background by including the ruined buildings that connect the imagery with the current war in Syria. A cluster of people seem to look out at the triad in the foreground of the canvas, as if gazing upon the tragedy of the original slaughter. 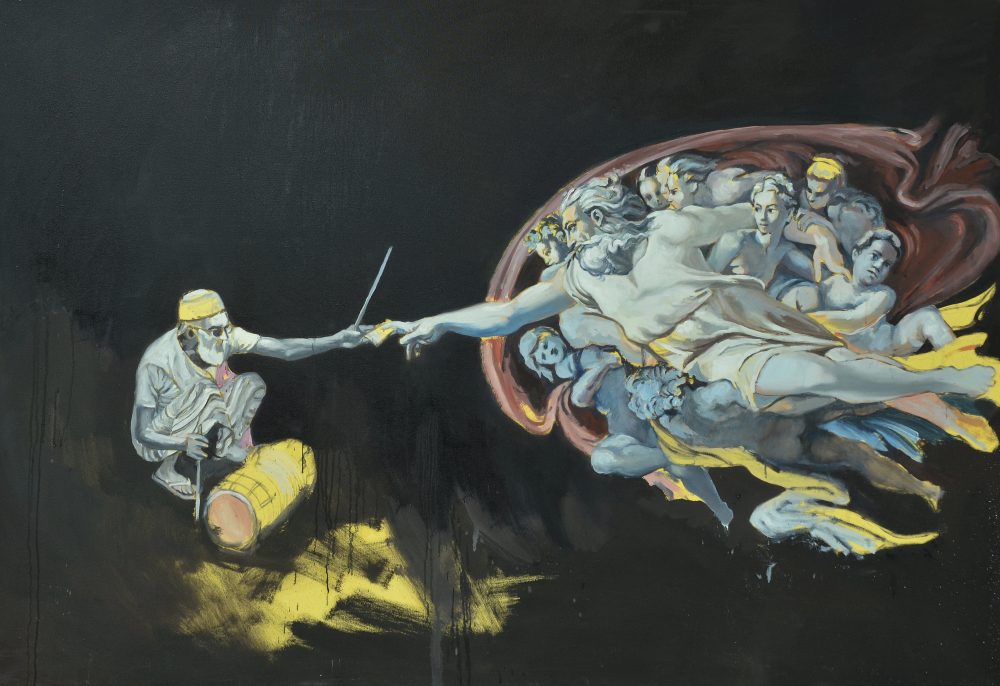 In the painting titled ‘Azaadi ki Devi,’ the bare-breasted figure leading the crowd is ostensibly a take on Eugene Delacroix’s iconic ‘Liberty Leading the People’ (1830). Delacroix was commemorating the July Revolution of 1830 with this picture. Liberty represents the spirit of France holding up a tricolour flag in one hand and a bayonetted musket in the other.

Mayo has transformed Liberty into another figure from our own time and space — Qandeel Baloch. The tricolour is replaced with a white flag that reads Azadi. The musket has been replaced with a selfie stick. This is Liberty in the age of modern media — a defiant figure of independence who, ironically, has come to represent tragedy.

Mayo’s work in this series remains consistent with the strong figural depictions that characterise his oeuvre. The figures are rendered with fluid strokes of paint and slightly elongated in the Mannerist style. Unlike the intense colours typical of Mannerism, the paintings are strong in dramatic chiaroscuro wrought with complex tonality of neutral shades that lend themselves well to the psychological depth inherent to the works. Blue tones are the preferred choice for rendering skin, and the extremities are sometimes touched with yellow.

Zahid Mayo has drawn upon Michelangelo’s panel from the Sistine Chapel ceiling, ‘The Creation of Adam,’ in the painting called ‘Khairaat.’ Adam is replaced with a blind, old dholak player whose arm stretches out to receive alms. 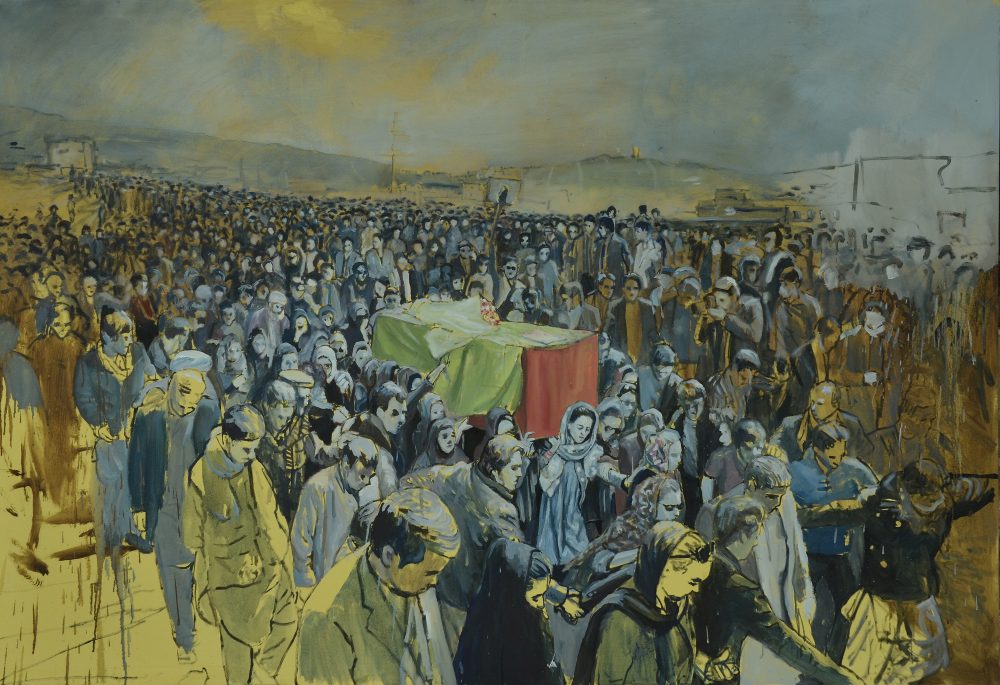 Whistler’s ‘Arrangement in Grey and Black No. 1,’ popularly known as ‘Whistler’s Mother,’ is transformed into a portrayal of Fatima Jinnah in ‘Madar-e-Millat.’

Perhaps the most enigmatic painting in the series is the one called ‘Untitled Being.’ The figure of the woman is taken from Rembrandt’s painting ‘Woman Bathing in a Stream’ (1654). The features of the woman in Mayo’s rendition are blurred by streaks of white paint. There is a strange eye painted on the woman’s chest, like a chakra — a contrived touch that is incongruous with the highly evocative quality of his portrayals. The stream she is immersed in is wider and different from the original work, blue with dark rushes and banks. Mayo suggests this stream is reminiscent of the ones he waded in as a child.

It is highly tempting to extrapolate that the untitled being may be a stand-in for Mayo himself. The stream, made mysterious with dark pigment, could relate to his stream of consciousness that brims with poetry and invited images. Upon viewing these complex canvases, we also become unfamiliar guests who have been welcomed into the artist’s imagination. The darkness we find is nothing more than the reflection of humanity’s depredations.