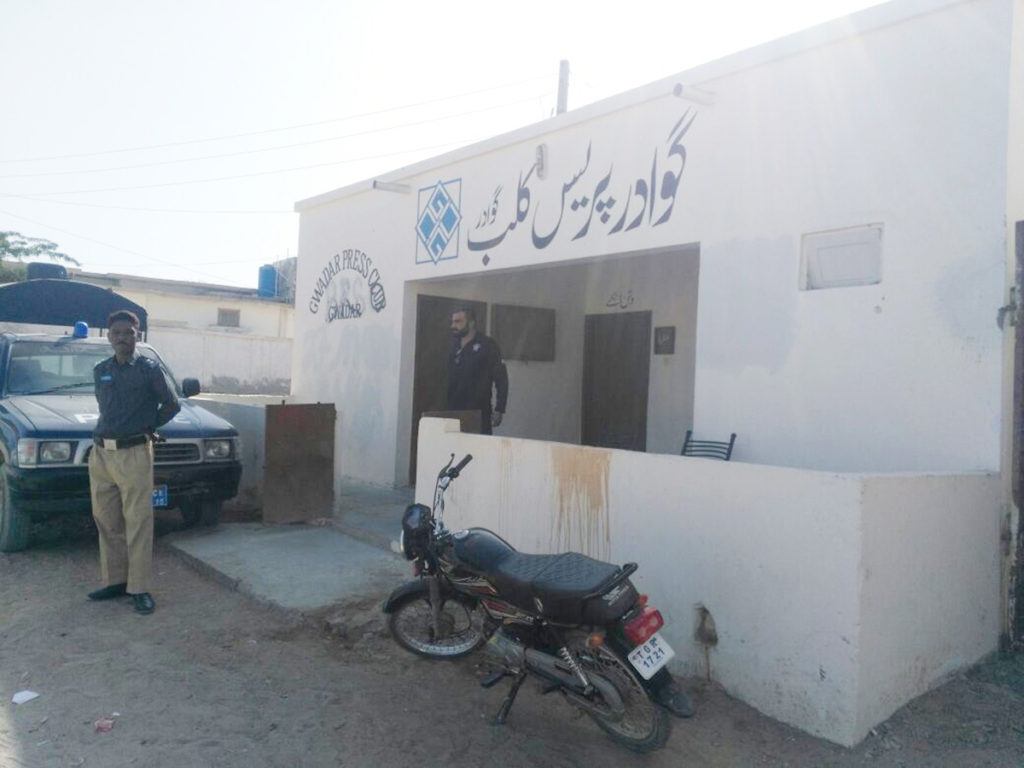 A ghostly siemce prevails at the Gawadar Press Club.

Sachal used to make a living as a newspaper hawker in the port city of Gwadar. But he has been sitting idle since October 25, 2017, after Baloch insurgent groups forcibly stopped the distribution of newspapers in most parts of Balochistan.

The unsettled province has been undergoing a low-level insurgency since 2005, in which a number of rebel groups have been fighting the state. These groups have claimed responsibility for several attacks carried out on security forces in the last decade.

Previously, statements issued by insurgents were published in all the local newspapers of Balochistan. This changed after the implementation of the Nation Action Plan (NAP), which put an end to the practice. As a result, newspapers stopped carrying statements of banned outfits over a year ago. The Baloch Liberation Front (BLF) retaliated by issuing a 30-day ultimatum: media houses had to choose whether they would carry statements made by the insurgents, or face an indefinite forced suspension of newspaper distribution.

After the deadline passed, there were a string of attacks. On October 25, a hand grenade was flung into the Hub Press Club, wounding six journalists. The following day, there was an attack on the office of a Turbat-based media house, the Pak-News Agency, which had been distributing newspapers since 1970. The same day, a vehicle carrying newspapers was targeted in the insurgency-ridden Awaran district of Balochistan.

After the attacks came more warnings. On November 1, threats were issued to several press clubs to suspend their activities. Currently, all individuals with any connection to the media are at risk of being attacked by Baloch separatists, who have told journalists, hawkers, and transporters to stay away from press clubs and newspaper offices. Even the Quetta Press Club is a potential target. Meanwhile, the security of media houses in Quetta has been beefed up with the deployment of paramilitary personnel, particularly at night.

Khalil Ahmed, President of the Balochistan Union of Journalists (BUJ), told Newsline that the provincial government of Balochistan did not take the threat of insurgent groups seriously — and, as a consequence, journalists are suffering. “Journalists in Quetta have limited their movement,” he says. “The Quetta Press Club wears a deserted look, while security in the newspaper offices has been increased.” According to Ahmed, “Working under a cloud of fear and uncertainty in Quetta has killed the creativity of journalists.”

This is the first time in the history of Pakistan that threats from insurgents have stopped newspaper distribution in Quetta, he says. Twenty-two press clubs have been shut down in the province. “The suspension has occurred throughout most of the Baloch belt,” continues Ahmed, referring to the central and southern parts of the province.

The BUJ protested against the prevailing atmosphere of fear, explains Ahmed, and wrote letters to the Inter-Services Public Relations (ISPR), the All Pakistan Newspapers Society (APNS), and the Council of Pakistan Newspaper Editors (CPNE), but to no avail. “Now we have started publishing claims of the insurgent groups in the form of short statements,” he says.

Journalists question the wisdom behind the NAP decision to stop publishing the statements of banned outfits. They believe that given the volatile security situation in the province, the statements are a bitter pill that must be swallowed. Balochistan’s Inspector General (IG) of Police told media personnel in a meeting that publishing the claims of insurgents in newspapers, in fact, made it easier for the police to carry out investigations.

Media houses and newspaper bureau offices in Gwadar too have suspended their activities and shut down the press club after threats. Bahram Baloch, President of the Gwadar Press Club, said that it is no longer possible for journalists to work after attacks were carried out by insurgents in Hub and Turbat.

Individuals involved in the newspaper distribution business in Balochistan have been hard hit economically. Mullah Riaz’s Al-Badar Bookstall in Gwadar is one of the leading newspaper distributors in the district, and almost a dozen hawkers sell newspapers from here. Now, not only is Riaz’s business suspended but the hawkers are also jobless. “We have been economically paralysed by the suspension,” Riaz tells Newsline. He maintains that even transporters have refused to deliver newspapers to stalls, in the aftermath of the threats.

A similar stalemate prevails in Khuzdar, the second-largest city in the province, where all media activity has ground to a halt. A reporter from Khuzdar, speaking on condition of anonymity, says that people have not been getting any newspapers since October 25; additionally, 30 newspaper hawkers have been rendered jobless.

Imran Naeem Ahmed, publisher of Journalism Pakistan, a web portal for Pakistan-related media and news, told Newsline that the recent developments signified a major blow to press freedom in Balochistan. He believes that the situation will only get worse if the provincial government does not move swiftly to remedy the situation.

“If you phone a reporter or a correspondent [in Balochistan] and ask him his location, he will not tell you,” says Imran. “He will not disclose his location even to his spouse. Such is the fear gripping the fraternity.”

Imran, who has been a journalist for more than three decades, criticises the role of media groups. “Merely issuing statements, or holding an occasional protest, is not what is needed right now,” he says. Imran advises journalists in Balochistan to exercise caution and curtail all unnecessary activities for now. “These are difficult times and all must tread carefully,” he suggests.

The media fraternity has criticised the provincial government for underestimating the threat of the Baloch insurgency, that has led to the current situation.

Anwaar-ul-Haq Kakar, a spokesperson for the provincial government, told Newsline that the latter has provided security to press clubs and printing presses. “The threats are only in a few districts and not in the entire province,” he says. “We are dealing with the situation according to the law.” Kakar claims that the insurgency does not have the support of the masses. As a result, he says, rebels use fear as a tool to target the journalist community, which is also an attempt to get the attention of the international press.

Although journalists in Balochistan have always faced threats and attacks, this is the first time that media activity has remained suspended in a major portion of the province. It is incumbent on the provincial and federal governments to provide security so that press freedom can be ensured in Balochistan. It also bears repeating that the current situation runs contrary to the government’s claims that conditions are improving in the province.