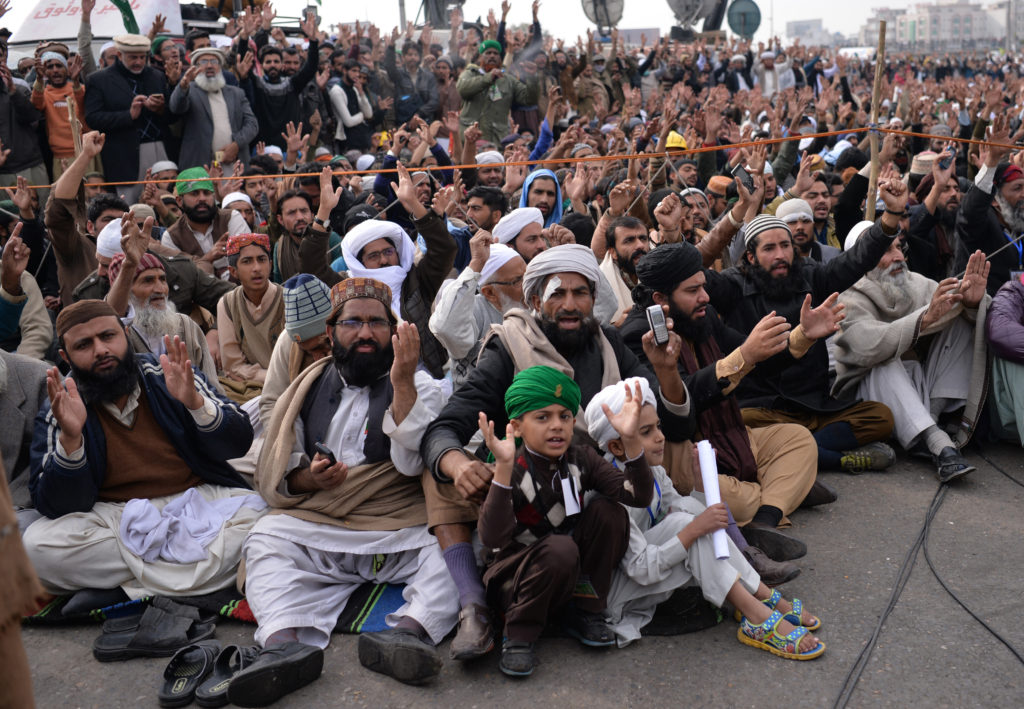 Between November 6 and 27, over 2,000 Tehreek-e-Labbaik Ya Rasool Allah (TLY) protestors from around Pakistan congregated and set up camp at the Faizabad Interchange in Islamabad. They were protesting the changes made in the Khatm-e-Nabuwwat clause of the Election Reforms Bill, 2017

Even though the changes made in the bill passed in October, in which “solemnly swear” was replaced with “believe,” were reversed shortly thereafter, the protestors refused to be placated, demanding that those responsible for the changes be penalised.

However, the matter was not that straightforward. Earlier, another group of TLY members had held a dharna in Islamabad. That group, led by Asif Ashraf Jalali, had camped at D-Chowk from October 24 to November 3.

“On November 3, we reached an agreement with government representatives that the culprits would be punished within 20 days — that is by Nov 23,” says Jalali. “We have a written agreement that has the signatures of [PML-N leaders] Khawaja Saad Rafiq and Talal Chaudhry, along with [DC Islamabad] Captain (R) Mushtaq Ahmed.” 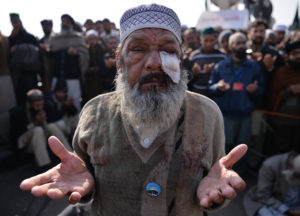 However, the TLY faction led by Khadim Hussain Rizvi, that contested the NA-120 and NA-4 by-elections — registered as Tehreek-e-Labbaik Pakistan (TLP) — reached a separate agreement with the government on November 27.

1)  Federal Law Minister Zahid Hamid would resign over the amendment in the Khatm-e-Nabuwwat law, while no fatwa (edict) against him would be issued.

2)  The report of the three-member committee, comprising the leader of the house in the Senate, Raja Zafarul Haq — which would determine who was responsible for the amendment — would be made public within 30 days and action would be taken against the culprits.

3)  All TLY activists would be released and cases against them withdrawn.

4)  There would be an inquiry into the government’s action against the protestors on Nov 25, 2017.

5)  The financial loss for the damage to public and private property during the dharna, would be borne by the federal government.

6)  The agreement reached with the government of the Punjab would be implemented in letter and spirit.

Immediately thereafter, Zahid Hamid resigned, and TLY activists were released, prompting Rizvi to wrap up his dharna. Jalali’s TLY, meanwhile, remained at Charing Cross on Mall Road, Lahore, where he and his group were now encamped. Jalali contends that they too had agreed on a separate six-point agenda with the federal government, which required punishment — in some cases, death sentences — for those responsible for the change in the clause. 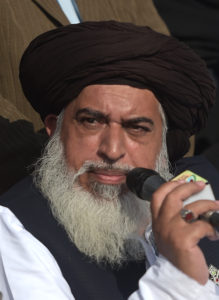 “We also demand the formalisation of a committee against the activities of Ahmadis and the dismissal of the entire Parliament that approved the Election Reforms Bill, 2017,” [with the offending clause], proclaimed Jalali.

“Rana Sanaullah [Punjab Law Minister] needs to re-enter Islam after having clearly apostasised when he found commonalities between Muslims and Qadianis,” he added. “Similarly, Zahid Hamid [Federal Law Minister], or whoever is responsible for the blasphemous changes, should suffer the same fate,” he added.

The TLY was formed as a resistance group after Mumtaz Qadri was sentenced to death for the murder of the then Punjab Governor, Salmaan Taseer, because, according to him, Taseer had committed blasphemy on account of his support for a Christian woman currently languishing in jail on charges of blasphemy. Since Qadri’s hanging, the TLY formalised its militant wing in Karachi, and contested two high-profile by-elections in Punjab and Khyber Pakhtunkhwa (KP) under the TLP banner, winning over 15,000 votes. 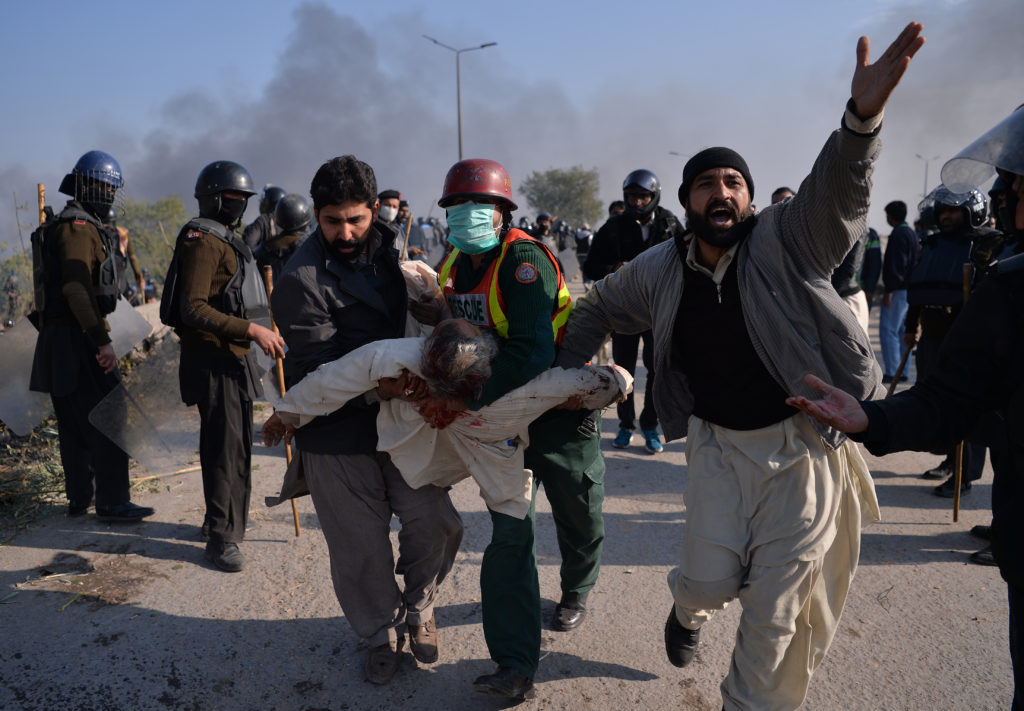 Jalali believes that the party’s immediate electoral impact is a reflection of the popularity enjoyed by Islamist parties among the public. The rise of the TLY has not been in isolation. There is a clear surge in religious parties becoming increasingly influential in national politics. 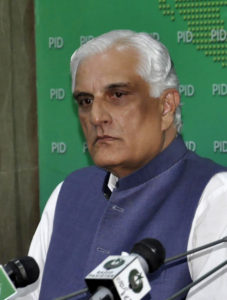 While the TLP was prominent in the NA-4 by-election, it was the Pakistan Tehreek-e-Insaf (PTI) that emerged victorious. On November 19, PTI Chairman Imran Khan, met with the chief of Jamiat Ulema-e-Islam (JUI-S), Sami-ul-Haq, at KP House in Peshawar to formally thank him for his support in NA-4.

“During the meeting, Maulana Sami-ul-Haq and Imran Khan agreed that the future of Pakistan lies in an Islamic welfare state,” JUI-S Secretary General Abdur Rauf Farooqi said, adding that the Islamic roots of the anti-corruption drive against the ruling party were also discussed.

Last year, the PTI-led KP government granted the Sami-ul-Haq-run religious seminary, Darul Uloom Haqqania, Rs. 300 million from the provincial budget. The seminary has been the alma mater of many jihadists over the years, prompting Sami-ul-Haq to be dubbed the ‘Father of the Taliban.’

Farooqi says his party and the seminary continue to support Islamist freedom movements around the world, including the Afghan Taliban. “There is a massive resurgence of Islamic groups in the region, which is why the Afghan Taliban are succeeding and Islamic parties in Pakistan are gaining electoral ground,” he says.

Another among these parties is the Milli Muslim League (MML), an offshoot of the proscribed Jamaat-ud-Dawa (JuD), which itself stemmed from the banned Lashkar-e-Taiba (LeT), believed to be behind the Mumbai attacks of 2008. MML was formed after its leader, Hafiz Saeed, was put under house arrest by the Punjab government in January. Saeed was released from house arrest on November 23.

“After gaining the religious vote for years through our support, the PML-N backstabbed us [by arresting Hafiz Saeed],” says an MML spokesman. “But the party’s bigger crime is deviation from Islam and the ideology of Pakistan through its friendly ties with India.”

While the MML-backed candidates, Yaqoob Sheikh and Liaqat Ali Khan, won thousands of votes in NA-120 and NA-4 elections, the party is yet to be registered by the Election Commission of Pakistan (ECP).

ECP officials confirm that the Interior Ministry has specified that the MML will not be issued an election symbol because of “its connections with Lashkar-e-Taiba,” which has been banned under the Anti-Terrorism Act of 1997. The ECP has said the same for the JuD, for having “attracted sanctions under the United Nations Security Council Resolution No 1267 and have been dealt with accordingly.”

However, no such ban has been proposed by the PML-N government on the TLY, which has not only held the capital hostage, brutally attacked police personnel, and wantonly destroyed public property, but also proudly displayed the face of Mumtaz Qadri — a convicted and punished terrorist — on its election campaign banners.

But not all is smooth sailing for the TLY, its biggest concern coming from within: an internal divide.

“We were fighting on a joint front. They then registered themselves as the TLP, while we remained as the TLY,” says Jalali. “We initiated the dharna first and we got six of our demands accepted before them,” he continues. “Those holding the dharna in Faizabad, did not have the right to agree on any terms with the government on their own. The case against Zahid Hamid demands a fatwa. Rana Sanaullah deserves worse [treatment] for actually trying to justify Qadianis as Muslims. And those Parliamentarians that signed the original Khatm-e-Nabuwwat amendment should be disqualified for life.

Counters Khadim Rizvi, “Frankly, I don’t know what’s going on in Lahore. I’ve been told there’s a dharna. I don’t even know where it is.” Outlining his future course of action, Rizvi says that TLY will continue to campaign for ‘Nizam-e-Mustafa,’ ahead of the elections. “We’ve saved the Muslim ummah. We’ve protected the honour of Islam. The Pakistan army was very important in the negotiation. But it only offered to be the mediator when the confrontation turned bloody,” he says.

“We did not trust any government representative as a mediator. How could we trust the word of anyone who is referred to as a thief in every nook and corner?”

Meanwhile, there doesn’t appear to be much, if any, resistance from the government towards this radical Islamist surge. Even the interior minister’s defence has been that the government had little choice in the matter but to capitulate to TLY demands. 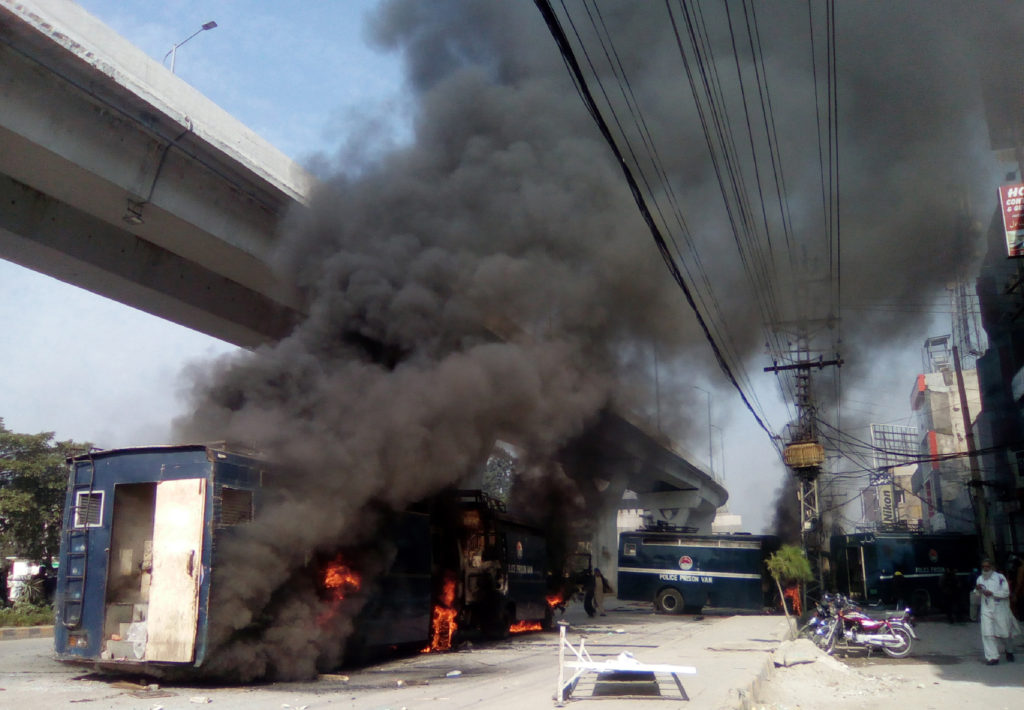 The agreement arrived at to put an end to the dharna, “was not desirable, but there was little choice because if [the] situation had persisted [for] another 24 hours, there would have been riots,” said Interior Minister Ahsan Iqbal, in a tweet on November 28.

There was also a deafening silence in other political quarters. The only ring of dissent, from any significant authority regarding the manner in which the imbroglio had been resolved, came from Shaukat Aziz Siddiqui, a Justice of the Islamabad High Court (IHC). “This court has serious reservations on the terms of the agreement and manner in which it [was] arrived at,” said Siddiqui. The law dictates that the “federal government has to satisfy the court regarding the constitutional role of the armed forces, and [provide] an acknowledgment… of the armed forces’ role as an arbitrator.” The armed forces, “being part of [the] executive of the country, cannot travel beyond the mandate bestowed upon it by the organic law of the country,” read the order released by the Islamabad High Court at the end of the hearing, on November 27.

“Who is the army to adopt a mediator’s role?” asked Justice Siddiqui. “Where does the law assign this role to a major-general?”

And given the public reaction to the prevailing situation, it is clear that many people are asking the same — and several other — vital questions. Among these: considering the conciliatory stance and appeasement by the authorities — the army and government alike — towards the increasingly powerful clergy, who really calls the shots in Pakistan?