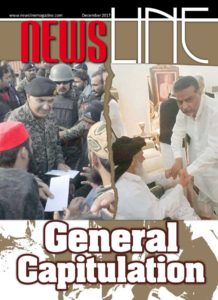 The video clip of the DG, Punjab Rangers, handing cash envelopes to supporters of Tehreek-e-Labbaik Ya Rasool Allah (TLY) at the end of their dharna in Islamabad, will remain etched in memory.

What were they being rewarded for? For challenging the writ of the government and holding the country hostage for three weeks by blocking the Pindi-Islamabad interchange? For jeopardising the lives of patients in need of urgent medical intervention, and inconveniencing commuters by prolonging their journey from 30 minutes to three hours? For torturing policemen and attacking civilians on their way to work with lathis, stones and axes? For damaging public property, including much needed elevators for the elderly and toilets for the public at the new metro station?

At the end of the day, the TLY zealots emerged victors all the way. The deal, brokered by an ISI official, read like a surrender deed. It promised the removal of the Federal Law Minister; the prosecution of those responsible for the amendment in the Khatm-e-Nubawwat clause in the Elections Reforms Act 2017 — which, incidentally, was rectified soon after — as well as those law enforcers who carried out the botched operation against the dharna; dropped the cases against violent demonstrators; and made the federal and provincial governments pay compensation for the damage caused by the TLY to public and private property. It was total capitulation to a force that threatens to push the country back to the medieval ages.

A dangerous precedent has been set. We have allowed an unruly, illiterate mob of vigilantes to decide who is a Muslim and who is not. All this in the Islamic Republic of Pakistan, where 97 per cent of the population is Muslim? Will all Muslims now be expected to prostrate themselves before these “Ashiq-e-Rasool” (PBUH), who have been hurling the choicest expletives at the judiciary, the ministers, the police and the civil administration?

Where does the PML-N government figure in all of this? Nowhere. The Interior Minister kept distancing himself from the failed operation, which he said was taken at the judiciary’s behest. The former prime minister kept expressing his annoyance at the manner in which the operation was conducted, while his worthy son-in-law, the Ahmadi-baiter, expressed his desire to join the dharna. Was Nawaz Sharif not in the loop, or was he, like his cabal of ministers, only focusing on Panama to save his own neck while putting everyone else’s neck on the line?

The role of the opposition was equally dubious. Instead of banding together against a force that threatens to change the contours of this country for the worse, they saw it as yet another opportunity to bolster their electoral prospects.

While the party that prides itself on its ‘secular’ credentials, the PPP, sat on the sidelines, the ‘mother of all dharnas,’ the PTI, had visions of bringing down the government. The prime minister-in-waiting proudly announced that many of his party men were raring to join the TLY dharna.

The rise of these extremist forces should be a cause of concern for any politician in his right mind. Election 2018 is right round the corner and the TLY and MML have expressed an interest in contesting the polls. And given their showing in the recent by-elections and their street power, they may spring some ‘unsavoury surprises.’ Hence the critical question: Will the war on terror be consigned to the dustbin as terrorists are mainstreamed into politics and politicians are marginalised?