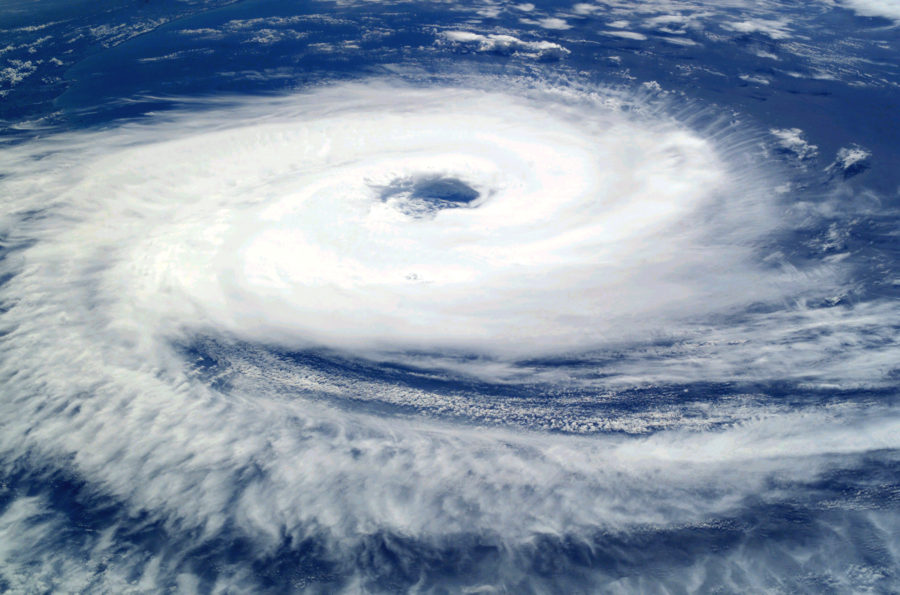 Hurricanes are not new to America. Almost every year, these natural disasters bring devastation in the south. But this year, it was apparent that climate change had accelerated the phenomenon. First, Hurricane Harvey wreaked havoc in the Gulf of Mexico, then Hurricane Irma flooded Florida, and later, Hurricane Jose hit parts of North Carolina. The story did not end there. In September, Hurricane Maria made headlines.

Pakistan, one of the countries worst hit by climate change, is on the hitlist of tropical cyclones, according to climatologists.

Cyclones, or tropical cyclones, are the same as hurricanes and typhoons in their intensity — they are just called by a different name due to the region in which they occur. They are called hurricanes if generated in the Atlantic and Northeast Pacific, and typhoons if occurring in the Northwest Pacific. In the South Pacific and Indian Ocean they are referred to as cyclones. For meteorologists, a tropical cyclone is a system generated over subtropical or tropical seas, with a wind speed of over 120 kilometres per hour, bringing about widespread thunderstorms.

On November 29, 2017, powerful storms and rains lashed Sri Lanka, claiming 13 lives. By November 30, this weather system had morphed into Cyclone Ockhi, wreaking havoc on the southern tip of India, in Tamil Nadu and Kerala.

Experts warn that Karachi too could bear the brunt of such extreme weather events and in order to protect the city, mangrove forests must be planted on a mass scale.

Aban Marker Kabraji, the Regional Director of the International Union for Conservation of Nature (IUCN) Asia, says that there is increasing evidence to suggest that such storms are connected to climate change. Rising sea levels (caused by melting ice caps), warmer waters and a warmer atmosphere intensify storms.

Quoting Lloyd’s City Risk Index 2015-2025, Kabraji explains that the combined effects of power outages, hurricane-force winds and floods, would result in a cumulative loss of US $0.73 billion, almost four per cent of Pakistan’s GDP (a liberal estimate). “The city’s poor would be particularly vulnerable to floods and dangerously high winds — losing lives, homes, and belongings,” she added. 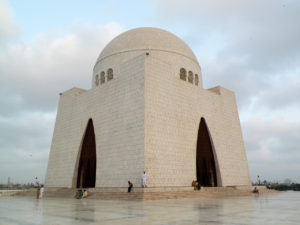 Commenting on ways in which Karachi can protect itself from these threats, she said that most of the damage from superstorms was caused by storm surge flooding. In the US, hard defenses like levees are popular, but often ineffective [as was proven in New Orleans during Hurricane Katrina, in 2005].

“Rehabilitating mangrove wetlands around Karachi would be an effective nature-based solution, as these ecosystems absorb the energy of rapid water-rise events like storm surges and tsunamis. They would act as a buffer and prevent storm surge waters from inundating the city,” she said, adding that rehabilitating native vegetation (grass, trees, etc.) on the beaches of Karachi could also slow coastal erosion in the meantime. This would make the city more resilient to storm surge and prevent buildings from collapsing in the event of a superstorm. Plant roots hold sand and soil firmly in place, making it harder to wash away.

According to the official record of the Pakistan Meteorological Department (PMD), in the 20th century 11 cyclones made landfall in Sindh and Balochistan. Among them, a tropical cyclone known as the ‘Karachi cyclone’ is said to have been the deadliest ever on record in Pakistan, which made landfall near the Karachi coast and killed more than 10,000 people, in 1965.

Between 2000 and 2010, however, seven cyclones were reported in Pakistan. Experts blame climate change for the intensity and frequent occurrence of cyclones in the Indian ocean.

According to the historical records, almost all the cyclones that originated in the Northern Indian Ocean, had always moved to the Indian state of Gujarat, while only a few moved to the Gulf or towards Pakistan’s coastline. But with every passing day, any cyclone that has moved to India, or the Gulf or Oman, has caused torrential rains in Pakistan, especially in the coastal cities.

Despite all these threats, Pakistan, and Karachi in particular — with a population of approximately 15 million — is ill-equipped to deal with a tropical cyclone.

Rescue experts maintain that lack of infrastructure and an effective public transport system, only increase the risk of potential damage in the event of a disaster striking from the sea.

“A sea-related disaster affects tens of thousands of people and the biggest challenge would be to transport the affected population to safer places, or to the hospitals,” says Faisal Edhi of Edhi Foundation.

Karachi does not even have a proper road infrastructure along the coastal areas, except in Defence Housing Authority (DHA). 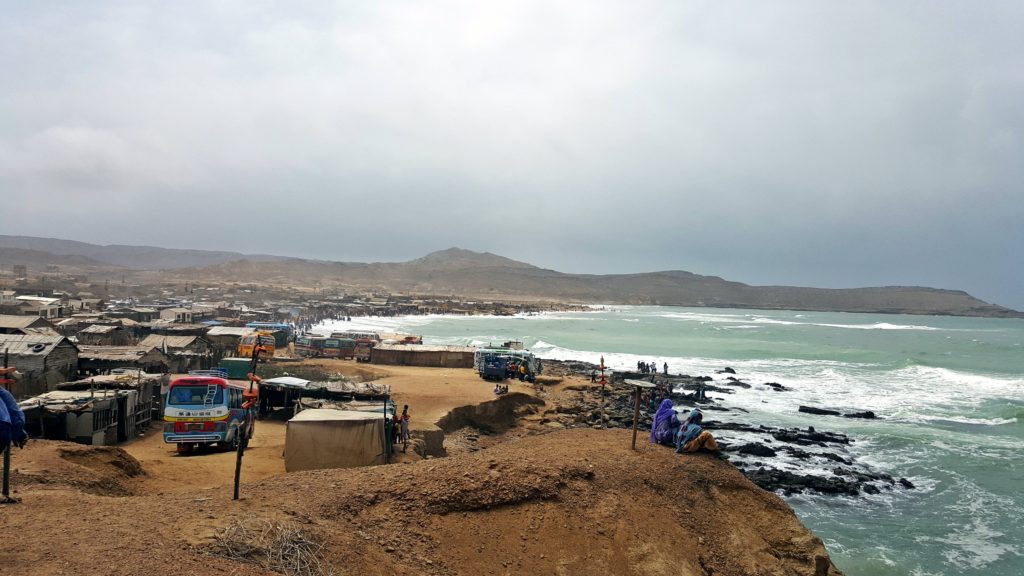 Mubarak Village: In the eye of the storm.

Edhi admitted that his foundation does not have the wherewithal to carry out rescue operations in case of any sea-related disaster in the future. However, he says that the National Disaster Management Authority (NDMA), which was established after the 2005 Kashmir Earthquake, along with its subsidiary body, the Provincial Disaster Management Authority (PDMA), have the capability to work on rescue during any disaster.

The rescue bodies are not air-mobile and have to requisition helicopters from the armed forces, according to Edhi. “The government should equip the NDMA and PDMA with aircraft and other equipment needed for mass-scale rescue operations; but first and foremost, we need road infrastructure,” explains Edhi.

Citing the world famous Chernobyl disaster of 1986 at the Chernobyl Nuclear Power Plant in Ukraine, then part of the USSR, Edhi says that within no time, government authorities were able to rescue tens of thousands of people from the affected areas owing to the infrastructure.

Incidentally, despite the predictions of climatologists and experts, most people in Karachi do not believe that a devastating cyclone or any other sea-related disaster would hit the city. Their belief is based on folklore. The shrine of Abdullah Shah Ghazi — an eighth century Muslim mystic, considered a patron saint of Karachi — is located in Clifton, besides Bahria Town’s Icon Tower. Many believe that it is the presence of this shrine that protects the metropolis from sea-related disasters. Others, however, argue that chances of a cyclone hitting Karachi are low, due to the geography of the seabed along Karachi’s coastline.

Meteorologists believe that the rising average Sea Surface Temperature (SST) is accelerating due to global warming and the El Nino phenomenon. Thus, there are greater chances of a cyclone of increased intensity in the Arabian Sea.

“The Average SST of the Arabian sea is 22 to 25 Degree Celsius, but during the summer months (May-June) or in November, it rises, and when it crosses 27 Degree Celsius, it generates a cyclone,” warns Mohammad Tauseef Alam, former Chief meteorological officer at the Pakistan Meteorological Department (PMD) Sindh. “But now, since the average temperature is on the rise due to global warming, occurrence of cyclones is becoming frequent.”

In 2008, to monitor the SST and observe the formation of cyclones, the PMD installed 10 automatic weather-monitoring stations along the Makran Coast in Balochistan and the Sindh coast. An early cyclone warning system was established. But the centre is no longer functional.

A well-equipped early cyclone warning system can help reduce losses, as it can forecast a cyclone and related government departments and authorities can start preparing in advance. 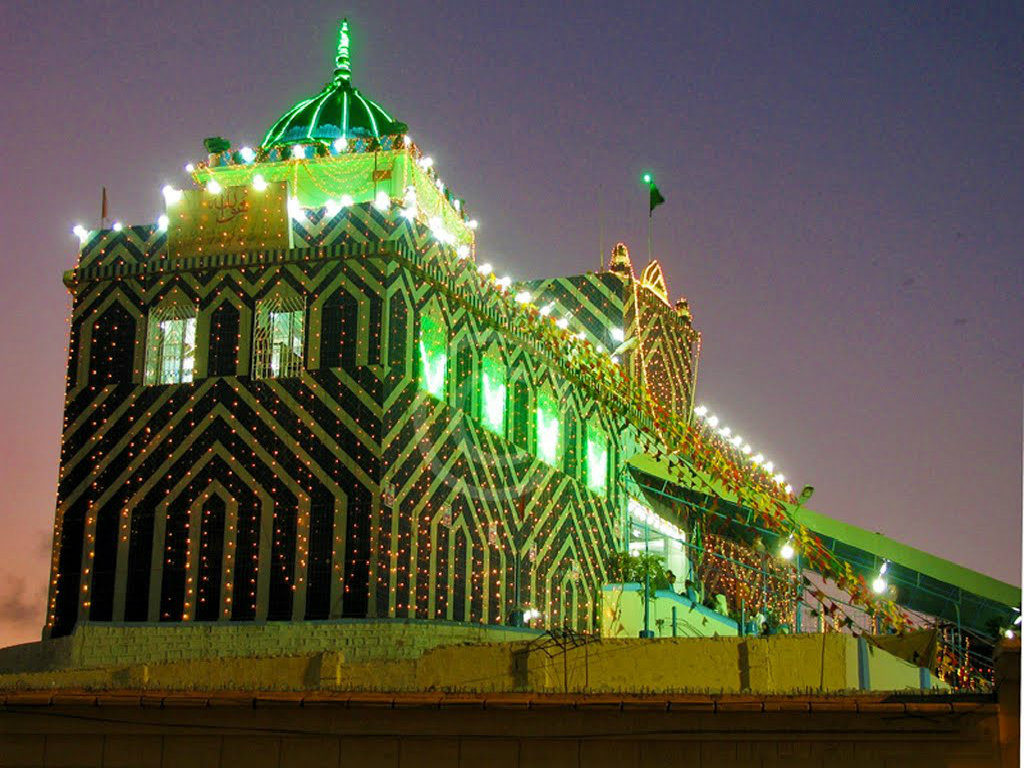 If a cyclone does strike Karachi, it would devastate the population living along the coast, in housing schemes built on reclaimed land. “There are around 500 historic coastal settlements of fishermen, with around one million people scattered from Lath Basti to Mubarak village, along the 129-kilometre-long Karachi coast,” said Pakistan Fisherfolk Forum (PFF) Chairman, Muhammad Ali Shah.

Around two million more people are living near the coastline, half of whom reside in Machar Colony, one of the city’s biggest slums. The Karachi Port and Port Qasim, the nuclear power plant, along with costly residential areas like DHA and Clifton, would be affected by a sea-related disaster.

The fact that Karachi has, in the last two decades, lost its natural line of defence — the thick mangrove forests — only makes matters worse. From Kaka Pir Village in Hawkesbay, to Ibrahim Hyderi, from Do Darya to Korangi creek, land has been reclaimed from the sea. Most parts of DHA, especially Phase-VIII, are built on reclaimed land, for which thick mangrove forests were cut down.

“There were 160,000 hectares of mangrove forests along Karachi’s coastline in 1992, but now there are only 70,000 hectares,” says Shah. The Sindh Forest Department, the IUCN and many other government departments and international organisations claim that they have planted mangrove forests along the Karachi coast, but despite that, the mangrove cover is reducing with every passing day.