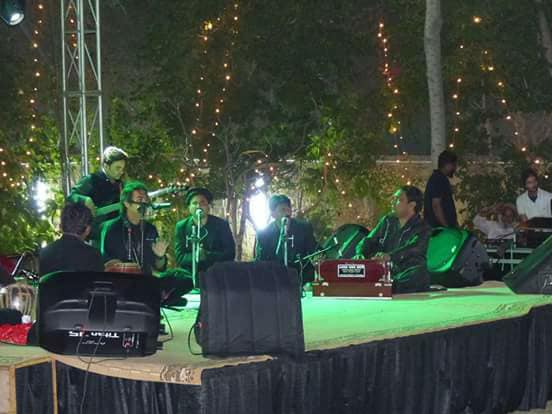 A crowd of young and old, lovers of music and students of the National Academy of Performing Arts (NAPA), seated themselves in the tightly-packed NAPA auditorium on November 21, waiting in anticipation for the musical performance of the German group C.A.R to begin. Jointly organised by the German Consulate General of Karachi and the Goethe-Institut Pakistan, the Jazz concert was one of the many events in the ‘German Weeks’: a series of cultural events held once a year.

German Consul General, Rainer Schmiedchen, spoke enthusiastically of how the German musicians would fuse with Pakistanis: “Musicians from Germany will interact with Pakistani musicians — this is the spice of the whole event!”

He went on to say that the show was a collaborative effort to reach out to the Karachiites. “By flying down musicians from Germany we show them that there are cultured people here, who will enjoy their performance!”

Stefan Winkler, who heads the Goethe-Institut Pakistan, introduced the C.A.R company – musicians Leonhard Huhn, Christian Lorenzen, Kenn Hartwig and Johannes Klingebiel – and spoke of the ease with which they organised the event with Arshad Mehmood, Director of Programmes, and the Head of the Music Department, NAPA, Ustad Nafees Ahmed Khan, who would later join the musicians on stage.

C.A.R was founded in 2011 by Klingebiel and Hartwig in Cologne, Germany; their sound is a blend of jazz, electronica and krautrock.

Sameen Murtaza, a student of NAPA and classical vocalist in training, expressed her desire to learn something new from the varying techniques, “We need to learn everything — its rhythm, melody, we learn a lot from every aspect! It’s a stage performance, and our mentors perform with them. One thing NAPA does best is fusion – our blending of eastern music with every kind of western music.”

Loud whoops of excitement erupted from the audience as the musical group took to a stage awash in royal blue lighting, setting the mood for a space age-like, mind-altering experience. “We are going to take you on a trip, so fasten your seatbelts!” remarked Klingebiel as the concert took off.

With Ustad Nafees Ahmed on the sitar, and Waqas on the tabla, the Pakistani and German musicians played the first set together, riffing off each other with finesse in one cohesive, psychedelic melody.

The second concert in Pakistan for C.A.R, after the warm reception to the first in Islamabad, marked the launch of their South Asian tour organised by the Goethe-Institut, which will take them to Colombo, Chennai, Mumbai and other cities.

While the concert’s eclectic music may not have been to everyone’s tastes, renowned director and producer, Sahira Kazmi, who was among the attendees, remarked upon the concert’s fresh take on jazz, “It was something new, something different. While it may not be the usual jazz that one is used to, it was certainly nouveau, and I quite liked it!”