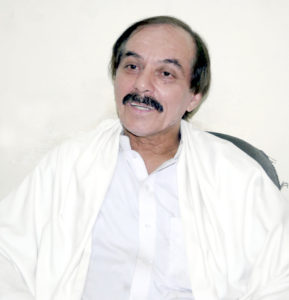 Writing is an art shaped largely by the environment. In Khyber Pakhtunkhwa (KP) and the Federally Administered Tribal Areas (FATA), a climate of fear and unease has engendered a genre of poetry new to the area. Referred to as Haiku — a three-stanza poem — it does not fail to bring a smile to the faces of residents in the militancy-stricken province.

“The aim of my writing is to bring joy to the people of this region,” says Pashto poet Zafar Khan Zafar, who hails from Peshawar, a frontline in KP’s suicide attacks and target killings. “Nearly half the inhabitants of KP suffer from psychological disorders as a result of the climate of terror.”

Haiku is short-form poetry of Japanese origin. In Japanese, this type of poetry is traditionally printed in a single vertical line, whereas in English, it appears in three verses. A poem by American novelist and poet Jack Kerouac, titled ‘Snow In My Shoe,’ is an example:

Snow in my shoe

Haiku poetry owes its characteristics to Basho — a 17th century Samurai warrior who contributed vastly to the genre. Zafar Khan Zafar’s version of Haiku, however, is more comically inclined.

Basho is one of the four famous Haiku poets from Japan, known as ‘The Great Four.’ The other three are Kobayashi Issa, Masaoka Shiki and Yosa Buson. Their work forms the traditional model of Haiku, which is followed to this day.

Zafar is among the well-known poets of KP, and can be seen at almost every poetic symposium held across the province. At literary functions, his humorous poetry is always in high demand and distinguishes him from all other poets.

According to Zafar, Pashtun poet Rahman Baba truly explored the tenets of Sufism. Advocating the message of peace, humanity and a universal brotherhood of man, his poetry had a vast impact on Pakhtun culture for decades. Zafar has also authored two books: Naway Loor (‘The Bride’s Daughter’) — a collection of Haiku poems — and Storay Zama Janan Ta Walay Gori (‘Why the Stars Gaze at My Lover’) — serious poems.

Zafar was, at first, a serious poet and was interested only in being known as a staid and unadventurous bard. But later, after reflecting on the individuality in Pashtun history, he attempted to discover a new genre and created a niche for himself.

Every time Zafar recites a Haiku poem in a public gathering, the crowd responds with laughter. The genre has become part of his identity. He longs to be remembered for having created something strange and unusual. Unfortunately, however, he is in a region where artists find little recognition.

Conditions for artists have not yet improved in KP compared to other provinces. Zafar points out that many poets in the province had led poverty-stricken lives and died unrecognised. It is disheartening to know that there is no future for poets like him in KP.

Zafar wants to live and die a poet and is not interested in wealth or power. He remains committed to his dream, but has grown increasingly disillusioned as there does not seem be anyone who will continue to keep satire alive through Haiku poetry. The future of the genre looks bleak.

In spite of the greater social and cultural challenges, Zafar believes that humans will seek happiness in one way or another and that there is room for everyone on mother earth.