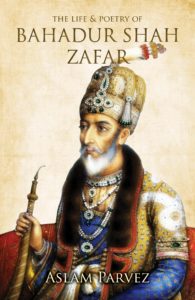 Bahadur Shah Zafar, the last emperor of the Mughal dynasty in India, ruled between 1837 and 1857 — but as a virtual prisoner of the British. While he carried the grand title of ‘Emperor,’ his rule was limited to Delhi and, strictly speaking, only to the Red Fort in Delhi. Ironically, this period of Mughal decline was the golden age of Urdu poetry. This was the era of the great poets like Mirza Ghalib, Sheikh Muhammad Ibrahim Zauq and Momin Khan Momin. Bahadur Shah Zafar was himself a poet of distinction, whose poetry occupies an important place in Urdu literature.

In the first part of the book, The Life & Poetry of Bahadur Shah Zafar, the author traces the history of the Mughal Empire from the time of the first Mughal ruler Babar, through the zenith of the empire during the times of Akbar and Shahjehan, moving on to the beginning of British rule in 1757, and goes on to detail the eventual dissolution of the Mughal dynasty in 1857. The final part of this narrative covers the period of Bahadur Shah Zafar’s incarceration and death in 1862 in Burma (now Myanmar), at the age of 87.

The second part of the book relates to Bahadur Shah Zafar’s poetry, with particular reference to the influences of the major poets of that time.

Given the subject, it is only fitting that the author of the book, Aslam Parvez, is himself a poet and a scholar from India. The book was originally written in Urdu and translated into English by Ather Farouqui.

Parvez writes about the most important event that occurred during Bahadur Shah Zafar’s reign: the uprising against British rule in 1857. Much as it is touted as a ‘War of Independence’ in the textbooks of Pakistan and India, he contends, it was, in fact, an insurrection by a ragtag band of Indian soldiers. And history testifies that while the uprising had its sympathisers, given its lack of planning and organisation, it was quickly snuffed out by a brutal British response.

Emperor Bahadur Shah’s role in the uprising was purely incidental. Being a powerless and mild-mannered Sufi, Zafar had never fomented or planned any kind of rebellion. As the book mentions, he became aware of the revolt only when the rebel soldiers arrived at the gates of Delhi. He then tried to dissuade the rebels from continuing with their uprising, but did not succeed. And eventually, reluctantly, he was compelled to assume the position of leader of the rebellion by the rebels.

The book makes the interesting point that since Bahadur Shah Zafar was just a figurehead king of India, he was relieved of the responsibility of running the affairs of the state and could thus focus on the empire’s social and cultural life. Generous and extravagant to a fault, Emperor Zafar ran the Red Fort like a cultural centre where music and poetry recitals were held regularly. He also celebrated the festive occasions of both Islam and Hinduism with great pomp and circumstance. And the marriages of the numerous Mughal princes and princesses — the book notes that Zafar had 12 sons and 42 daughters from his official wives and numerous concubines — were celebrated lavishly. The last years of Mughal rule thus turned out to be the last big party before the curtain went down on their empire.

One wonderful aspect of the book is the vividness with which it brings to life the festivities of Delhi. The descriptions of events like the Phool waloon ka mela (the flower seller’s carnival) for example, transport the reader to the celebratory mood and feeling in the historic locales of the city.

And along the way, the book also indicates how the emperor, even though he was just a figurehead, was much-loved, not least because he did not discriminate between Muslims and non-Muslims. Some of Zafar’s wives and concubines were, in fact, Hindu.

At the other end of this spectrum of pomp and splendour, was the chronic shortage of funds the emperor had to deal with in maintaining the royal lifestyle. Bahadur Shah was forced to constantly write to the British governor general for more money, often without success. And when the funds would run out, the emperor would be compelled to borrow from money-lenders and traders. Another way in which money was collected was to ‘sell’ positions in court. Those desirous of gaining influence in court would pay the amount determined for a position.

The book indicates that spying for the British was common and mentions that Hakim Ahsanullah Khan, Zafar’s physician and close confidante, was in the pay of the British. In addition to spying, intrigues were also rife in the Red Fort. Often these intrigues revolved around the tussle for succession among the princes. The book portrays Zeenat Mahal, the emperor’s youngest and favourite wife, as an ambitious woman, who secretly tried to cut a deal with the British to nominate her son, Mirza Jawan Bakht, as the heir to the throne. Even when the king and his family had taken refuge in Humayun’s tomb in Delhi in 1857, Zeenat Mahal tried to negotiate with the British to make her 17-year-old son the emperor. These manoeuvres were, of course, futile, as the British had already decided to end the monarchy in India and physically eliminate most of the royal family.

In the second part of the book, Bahadur Shah Zafar’s poetic leanings and relationship with various poetic masters is described in detail. One important point that the book makes is that while Zafar had employed great poetry teachers like Ghalib and Zauq, he had also developed his own unique style of verse. The author counters the claim by some critics, among them Mohammad Hussain Azad, that Zafar essentially copied the style of his favourite mentor   – Zauq.

The book also presents an account of Bahadur Shah Zafar’s last days in Rangoon differently from what is commonly believed. The author claims that members of the family who wanted to accompany the emperor were allowed to go with him to Rangoon. There he was provided reasonably good accommodation, food, and healthcare by the British.

Bahadur Shah Zafar is, overall, a lively and informative read. However, while rich in facts and interesting anecdotes, it is also somewhat disorganised, with some repetition in different chapters. More rigorous editing would have improved the flow of the narrative.