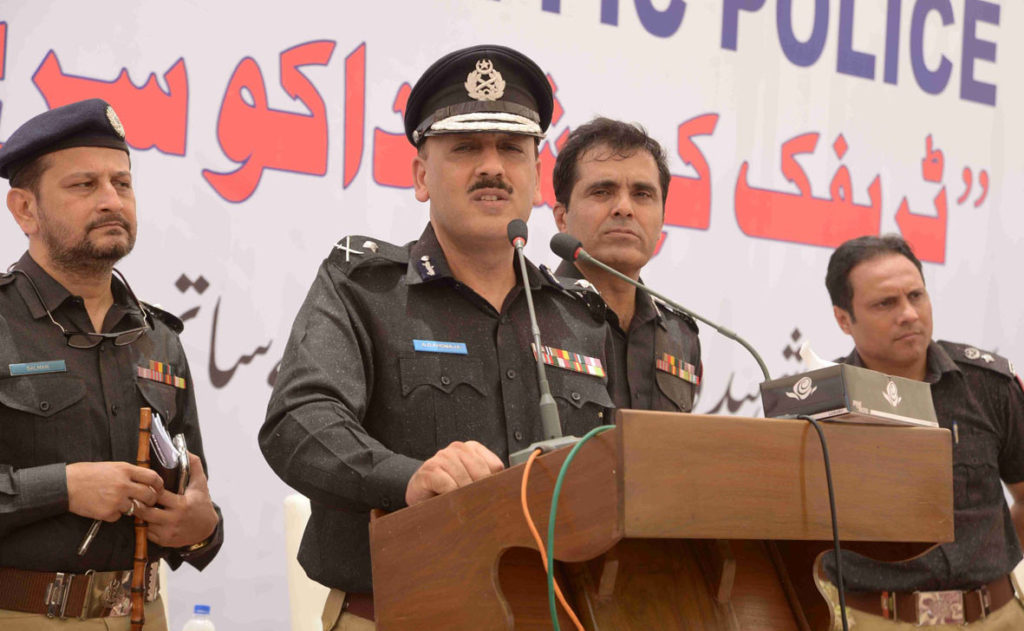 The tug of war between the Sindh government and the Inspector General (IG) of the Sindh police, Allah Dino Khawaja, refuses to die down. The Sindh government seems adamant to get rid of him before the upcoming general elections, but there is little it can do without taking the federal government on board.

In March 2016, Khawaja was appointed chief of Sindh police, after the removal of Ghulam Hyder Jamali, who was caught at the centre of a National Accountability Bureau investigation into the mismanagement of police funds.

Ironically, it was the Sindh government that submitted Khawaja’s name to the federal government for the top police post to replace Jamali. But the provincial government’s love for its top policeman was short-lived, after it became clear that instead of obliging the powers that had asked for his appointment to this post, he was assertive and independent — traits that have proven inconvenient for the Sindh administration.

In December 2016, Khawaja was sent on a 12-day ‘forced leave,’ after a decision was taken by the PPP high command in Dubai to replace him. He was reinstated and returned to work in January 2017. Soon thereafter, however, the provincial government replaced Khawaja with Sardar Abdul Majeed Dasti as the new IG Sindh, and asked him to immediately take charge of the office. The Sindh High Court (SHC), however, had other plans. In September, 2017, it suspended the government’s notification for the removal of IG Khawaja, ordered him to resume his duties as provincial police chief, and ruled that the provincial government could not remove an IG without potent justification. It also passed an order restoring his powers of transfers and postings within the police department and defining his tenure. Furthermore, the court made it mandatory for the government to follow the judgement in the Anita Turab case, under which an IG could not be removed from his post before the three years of his appointment were over.

The court’s proactive stance was widely appreciated. Soon after coming to office, Khawaja had tried to bring about positive changes in the police department, and refused to entertain certain ‘requests’ by the ruling party in the province, i.e. the PPP. Perhaps the act that proved most unacceptable for the ruling party to stomach, was the merit-based recruitment of approximately 20,000 constables, through a committee comprising representatives of the Pakistan Army’s V Corps and the Citizens-Police Liaison Committee (CPLC). Recruitment on merit deprived the provincial government of an opportunity to distribute jobs in exchange for votes prior to the upcoming elections.

Meanwhile, civil society also stepped forward in support of the police chief. A petition was filed by the Pakistan Institute of Labour, Education and Research’s (PILER) chief, Karamat Ali, which called for revoking the Police Act of 1861 and replacing it with the Police Order 2002.

After the court’s order, the IG was empowered to make transfers and postings independently, right from the post of Additional Inspector General (AIG) to lower grades — an exercise of power rarely enjoyed by provincial police chiefs in Pakistan.

Upset with the SHC’s decision, the Sindh government quickly moved the Supreme Court through its counsel Farooq Naek, in an attempt to reverse the SHC decision. The “replacement of [the] current IGP with a Grade-22 PSP [Police Service of Pakistan] officer,” was agenda number three, in a meeting of the Sindh cabinet in October. Since the court stated in its judgment that an officer could not be removed unless there were credible reasons, and the provincial government was finding it hard to make a case against the current IG — since it could not accuse him of gross-misconduct, corruption or the abuse of power — it conjured up one.

Fulfilling the court’s guidelines, that notice has to be given to the IG, the Sindh government wrote a letter to Khawaja, informing him that since he was serving as IG, which is a posting higher than his grade, on an own-pay-scale (OPS) — i.e., the pay scale of a Grade-21 officer, the provincial cabinet had approved his replacement with a Grade-22 officer, implicitly meaning one who technically merited this post. Khawaja was present at the meeting and defended his OPS-based posting.

Interestingly, reports suggest that one of the reasons the PPP accepted the Election Reforms Bill 2017 in parliament, was because it had reached an understanding with the federal government regarding Khawaja’s removal.

“This is unprecedented,” remarks Shoaib Suddle, a former IG Sindh and DG Intelligence Bureau, in reference to the tussle between the current IG and the provincial government. According to Suddle, whenever such a situation has arisen in the past, the officer has always been transferred without opposition. But this time round, for various reasons, the federal government is not obliging. The police needs to be de-politicised, he contends. And this doesn’t require funding, but a change in attitudes.

The former IG said that the current tussle over the removal of a police chief was rather unfortunate, and possibly the longest-lasting in Pakistan’s history.

In The Faltering State: Pakistan’s Internal Security Landscape (OUP, 2017), former DG Federal Investigation, Tariq Khosa, argues, “The issue of political interference in police matters finally became a policy issue in a meeting of the apex committee in Karachi, but for me it is not a healthy development that the military may get involved in police administrative issues. Will the police now look to military commanders for the security of their tenures or for different assignments? This should not happen. The chief ministers must demonstrate the political will to give the police command administrative and operational autonomy. The military should not call the shots in police matters. We must choose the democratic path where an independent judiciary and operationally autonomous, but highly accountable, police ensure the rule of law and administrative justice.”

The establishment wants the current IG to continue in office, as it fears that the newcomer may kowtow to the wishes of the provincial government. There are apprehensions that such an attitude could translate into poor law-and-order conditions for Karachi and the province in general.

Recently, a photograph of Bilawal Bhutto shaking hands with IG Khawaja in Sukkur was doing the rounds on social media. The impression being created was that Bilawal was reluctant to shake hands with the man. However, at least two people present at the scene explained that upon seeing the IG, Bilawal told him that after seeing him there, he felt safe. He only shook hands with Khawaja and proceeded without shaking hands with anyone else.

Party insiders say that Bilawal and Chief Minister of Sindh, Syed Murad Ali Shah, were instrumental in the
appointment of Khawaja, but they failed to defend their choice in front of the more dominant group within the party.