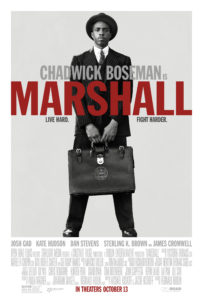 The film title Marshall, sounds like a thriller, and it has been given the treatment that tries to create that vibe, but it is really an absorbing, old-fashioned courtroom drama — and one based on a true story. The film is about the legendary US civil rights figure and legal pioneer, Thurgood Marshall, and one of his defining criminal cases early in his career in the predominantly racist south of the1940s. He was the first African-American to rise to the highest bench in the land to become a Justice of the US Supreme Court — but that would be more than 30 years after the time frame of this film.

The movie revisits 1941 when Marshall (Chadwick Boseman) is the sole attorney working for the National Association for the Advancement of Coloured People (NAACP). The film opens to an episode from the 21 years he spends traversing the country, defending people accused of crimes because of their race — with only slim chances of fair trials. He arrives in Bridgeport, Connecticut to assist in the defense of an accused, Joseph Spell (Sterling K. Brown) in a case that has made the local headlines and caught the eye of the NAACP because no homegrown lawyer will defend him.

In what comes to be known as the ‘Spell Case,’ the man standing trial is a butler and chauffeur accused of rape and attempted murder by the wife of his wealthy employer, Eleanor Strubing (Kate Hudson) — a white socialite. Since only attorneys licensed to practice law in Connecticut can argue before the bench, a reluctant insurance lawyer, Sam Friedman (Josh Gad), is enlisted to join the defense with Marshall.

Friedman is Jewish, and in the film is shown to be nervous about pairing up on a case that could draw unwanted attention towards his own community, which fear discrimination themselves. Shaky at first, Friedman, with no experience in criminal law, is coached, teased and challenged by Marshall throughout the case proceedings. The unlikely duo try to adjust to each other and work around the restrictions placed on them by a domineering white judge who is determined to muzzle Marshall’s brusque New York-style.

The intense courtroom scenes and cross-examinations of Spelling and Strubing make for a he-said she-said legal thriller, as Marshal and Friedman investigate the irregularities in their claims. Both lawyers argue the case in front of a packed courtroom steeped in prejudice. Marshall’s arrival and swagger, only exacerbate local sentiments, and both attorneys face racists in and out of the courtroom, at times even confronting violence.

While Chadwick Boseman gives an Oscar-worthy performance as Thurgood (born Thoroughgood) Marshall, radiating the strength, conviction and unwavering dedication the man was known for, the film unfortunately also leaves you wanting to learn more about this intriguing legal attorney. The movie does not fall in the genre of a biopic, and that makes it a missed opportunity to highlight the incredible career of an iconic figure to whom Dr. Martin Luther King once telegrammed, “You have proved to be a giant in your profession and your career has been one of the significant epochs of our time.”

History testifies that Marshall was certainly deserving of that praise. As a young accomplished New York lawyer, he had already argued his first Supreme Court case, and out of the record 32 civil rights cases he proceeded to argue in front of the US Supreme Court, he won all, except three, including the 1954 landmark case of Brown vs Board of Education, which outlawed segregation in public schools. It was John F. Kennedy who nominated Marshall as a judge of the United States Court of Appeals for the Second Circuit in 1965. And in 1967, Lyndon B. Johnson nominated him to become the nation’s first African-American Supreme Court Justice — a post in which he served for almost a quarter of a century.