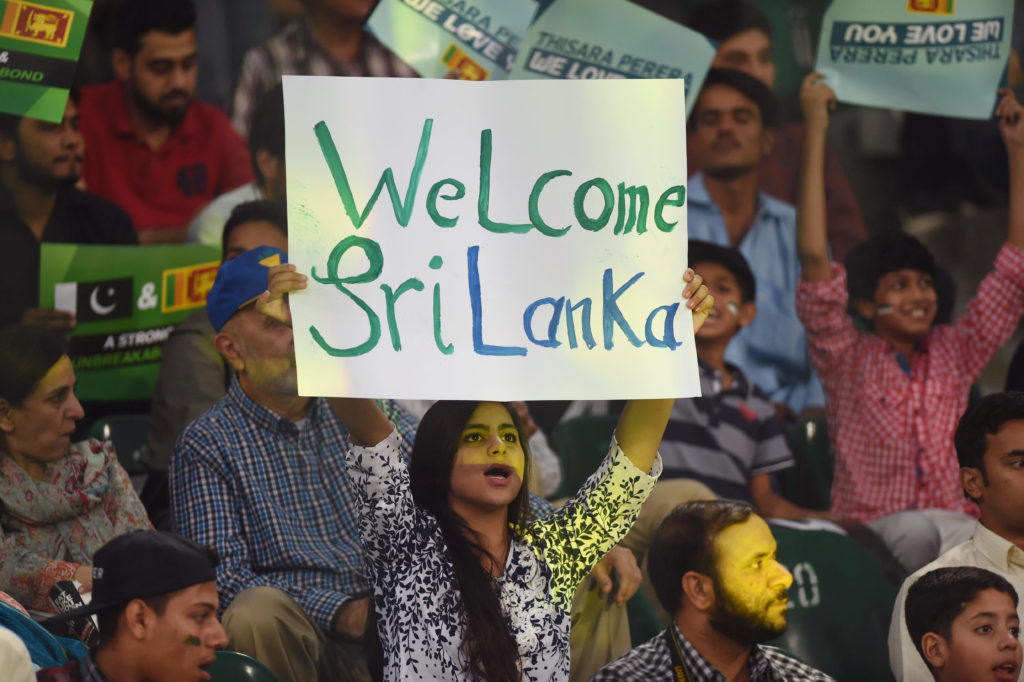 Pakistani spectator holds a placard during the T20 cricket match between Pakistan and Sri Lanka at the Gaddafi Cricket Stadium in Lahore.

Lahore has hosted three international cricket events this year: the Pakistan Super League (PSL) final in March, the Independence Cup against an ICC World XI in September, and a T20 match against Sri Lanka in October.

Over the three weeks prior to the PSL final, two blasts, occurring only a 15-minute drive away from Gaddafi Stadium — in DHA and opposite the Punjab Assembly — had raised questions over whether the event should be held at all.

What it meant was that an unprecedented ‘five-tier’ security arrangement would be maintained outside the stadium.

The spectators would first be scanned in the parking lots of Liberty Plaza and FC College and then once again, just before boarding shuttle buses. The third security layer was at the main gates of Gaddafi Stadium, and the fourth, inside the stadium. The final security check was carried out at the entry points of the stands.

This setup — which ensured that the crowds had to start pouring in hours before the first ball was to be bowled — was maintained during the Independence Cup and then again in the series against Sri Lanka.

While circumstances dictated the drastic security measures, they were only made workable by choking some of the busiest areas of Lahore for an entire day.

That such an arrangement was unsustainable, became evident during the Independence Cup, which, unlike the PSL final and the Sri Lanka contest — both single matches on a Sunday — comprised of three matches, all of which were held on weekdays.

One can only imagine the losses suffered by businesses that were forced to remain closed on Main Boulevard in Gulberg, where Siddique Trade Centre, Hafeez Centre and Liberty Market are situated.

“I would like to thank the Punjab government for their efforts in hosting this week’s cricket matches in Lahore,” wrote Rozee.pk CEO, Monis Rehman, whose office is on the Main Boulevard, in a sarcastic post on Facebook during the Independence Cup. “We are delighted to contribute by shutting down our offices for four days, displacing 150 employees and finding last-minute accommodation and network connectivity for them at three different premises by begging, borrowing and pleading with friends.

“I’m sure Hafeez Center is also grateful for the opportunity to shut down for four days,” continued Rehman. “So are the thousands of other employees and shop owners on Main Boulevard, Gulberg.” And just in case readers hadn’t caught on, he added, “Yes, I’m being sarcastic. Because I’m too angry to be serious. The private sector is paying tens of millions of dollars in losses to give the government bragging rights for hosting these matches.” 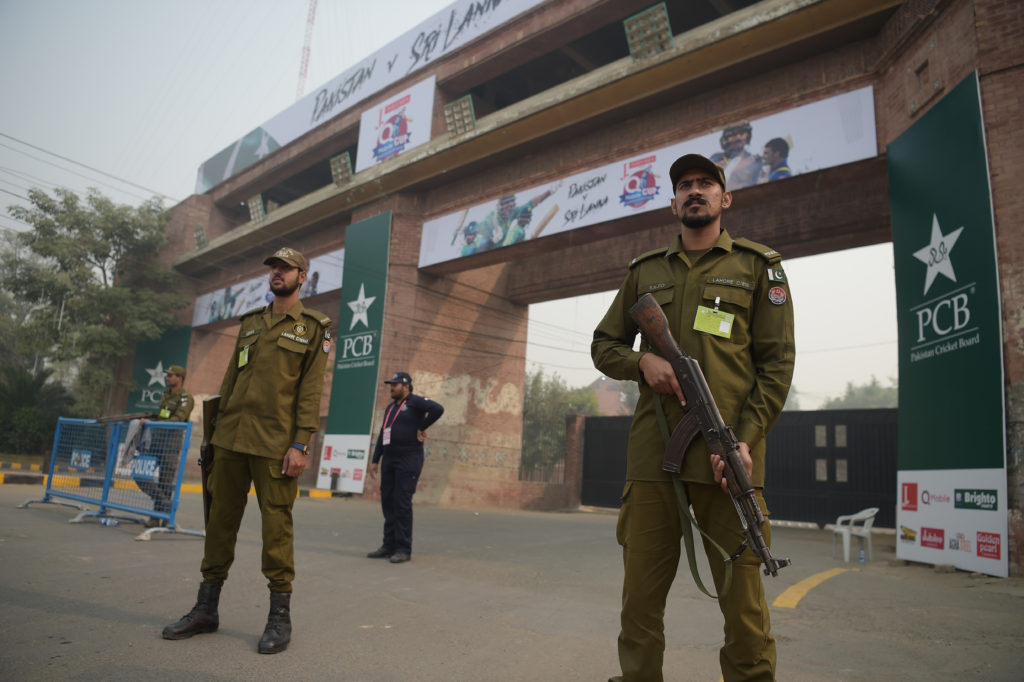 Pakistani policemen stand guard at an entrance of the Gaddafi Cricket Stadium.

“We had alternative traffic plans ready for the public at large to ensure the smooth flow of traffic,” said Lahore Chief Traffic Officer (CTO), Rai Ejaz. He added that CTOs and SPs from Gujranwala, Multan and Sialkot were also involved in organising this.

If that is true, it means that the plans weren’t properly conveyed to the public. All notifications in this regard were restricted to occasional radio announcements and posters in booths inside the stadium’s periphery — where they were least required.

Furthermore, the alternative traffic plan itself wasn’t properly implemented, for even though it specified that Mall Road was to have two-way traffic, the fact that the international players were staying at Pearl Continental meant that it too had to be blocked.

Haider Ashraf, DIG Operations, was unavailable for comment on the security measures taken for international players. When contacted, Pakistan Cricket Board (PCB) Chairman, Najam Sethi, said that the exact details of the arrangements could not be shared for security reasons, but gave reassurances that all matters were being streamlined, and that every cricket event had been better managed than the previous one.

Although the exact costs of security arrangements weren’t shared, sources confirm that the three-match Independence Cup cost the PCB over three million USD, which includes 100,000 USD spent on each international player. Other major payments included the cost for international security consultants, Reg Dickason and Nicholls Steyn and Associates, which came with a 1.1 USD million pricetag, paid by the ICC.

“ICC have paid for and invested a significant sum of money in security and training of Pakistani security agencies,” said Giles Clarke, the ICC’s Pakistan Task Team (PTT) head, in a press conference ahead of the Independence Cup. “In the end, we need Pakistani companies to provide those services, and that is what will happen in future.”

Even though the PCB has made a profit every year since 2011 — which includes 2015, where the Zimbabwe tour cost the board over 1 million USD — and has posted a profit of 14.5 million USD, it is evident that the board is looking to streamline the cost and arrangements to host international cricket. “This was always going to be a temporary fix. This is why there have also been glitches in our arrangements from the ground staff, to ticketing,” says a PCB official. “But let’s not forget that we have gone from not hosting any international cricket for a good part of a decade, to now being thrown into the deep end, with challenges that no other host country faces.

“But things are already being streamlined and we can see improvements in all areas,” continues the official. “By the time the West Indies tour Pakistan in March 2018, after the three PSL matches, things will be even better. And with an increasing number of international matches, the cost to bring world stars to Pakistan will gradually be reduced.”