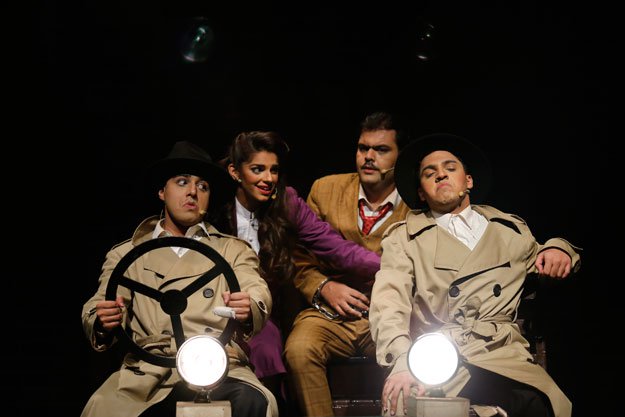 The curtain raiser for the much anticipated play, The 39 Steps, originally adapted from a 1915 novel by John Buchan, turned into a movie by Alfred Hitchcock in 1935, and readapted for the stage at the Karachi Arts Council by Nida Butt, was a sad anti-climax: no curtain was raised that day. The play had to be postponed on account of the law-and-order situation in the city. Despite the prevailing uncertainty, however, several enthusiasts turned up for the premiere of Made for Stage’s latest theatrical production the following day. A combined audience, those who had been invited the first day and those for the second, were welcomed to a treat — not just the play — but to a spread of catered fine dining finger food that included canapÃ©s and devilled eggs which people couldn’t get enough of.

As for the play itself — a spoof spy story — it was a feat of superb direction and acting, with only four actors, Sanam Saeed, Faraz Lodhi, Zeeshan Shah and Ali Hashmi, who kept the audience in stitches, and a minimal set design that rocked.

Set in Britain in the 1930s before WWII, the play required stage, costume and character changes at warp speed. Saeed, no stranger to theatre, played a German spy, Annabella Schmidt, a British lady, Pamela, and a country belle, Margaret, while Zeeshan Shah and Ali Hashmi, with their clowning, evoked continuous laughter from the audience, playing over a dozen characters each. The three actors played close to 40 characters, changing their speech, body language, clothes, and headgear for their various acts with remarkable fluidity. But it was the fluent accents they managed to simulate, including a Scottish accent, a Glaswegian one and an upper crust British one, that really were a credit to the actors’ skills. 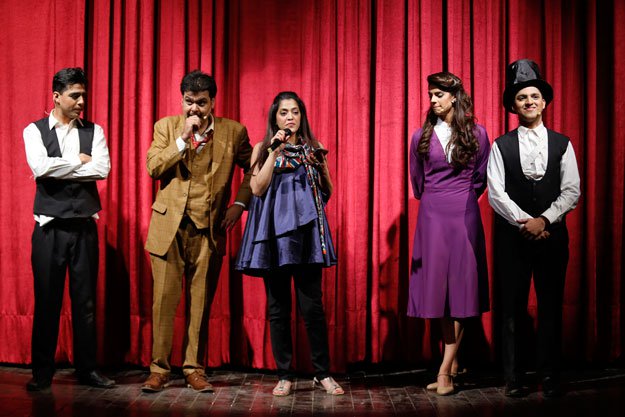 Unlike Hashmi and Shah, Faraz Lodhi remained in just one role — the lead — playing Richard Hannay, a conventional Englishman, on the run because of being framed for the murder of a German spy, Annabella Schmidt. Hannay had agreed to let her stay in his London flat for the night after being wheedled into this by her, and in the dark hours of the night she was mysteriously stabbed. Before dying, Schmidt left Hannay a clue that would lead him to her killers and the mystery of the 39 steps. To prove his innocence, Hannay headed to Scotland, evading the authorities, bumping into various characters and getting romantically entangled with women along the way.

Particularly impressive through the play were the imaginative simulations of travel by car and train by all the actors. And during lights out, the audience also enjoyed watching the extras sprint around on stage to change the sets that were perfectly sychronised, as were the lighting and sound effects of the scenes. The play kept the audience consistently entertained and engaged till the end, until the mystery of the 39 steps was finally revealed.

This play was quite a departure from Nida Butt’s previous hit theatre productions, that boasted elaborate sets, larger casts, singing, dancing and orchestra. But despite being a minimalist play, producing The 39 Steps must have been equally challenging. As she thanked the audience after a hearty round of applause, she remarked that there was more activity backstage than onstage to make the play appear seamless. But with The 39 Steps, Butt has demonstrated a brilliance and diversity in her directorial and creative talent, and can notch another popular theatrical production under her belt. Hopefully The 39 Steps will draw audiences despite the pricey ticket to make it the success it truly deserves. n