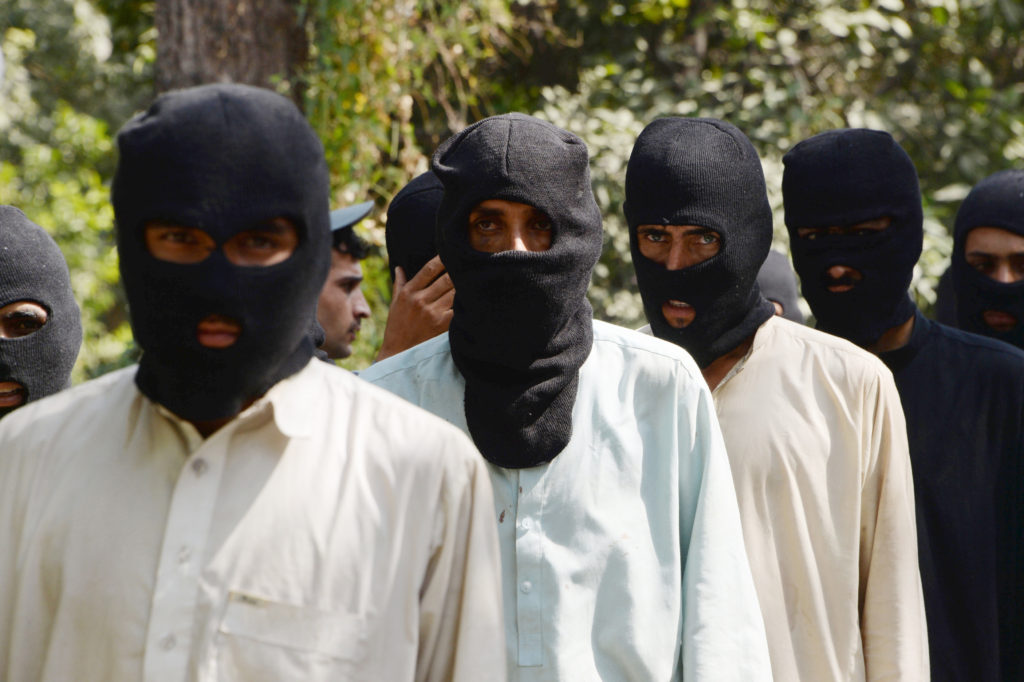 Alleged Taliban and Islamic State fighters at the police headquarters in Jalalabad, on October 3, 2017.

China and Pakistan are in contact with the Taliban in an effort to convince them to hold talks with the Afghan government. Yet, according to a diplomat who is close to the development, uncertainty remains rife and the launch of any successful peace process does not seem likely in the near future.

The foreign diplomat, who was not authorised to speak to the media, also expressed his confusion over the Taliban’s stance on talks with Kabul. A few days ago, he disclosed, a Taliban spokesman denied any plan for talks with the Afghan government. However, he said they are willing to participate in a peace conference, and in unofficial interaction with Afghan officials, while simultaneously contending they will not negotiate peace with them.

This doublespeak by the Taliban is not unprecedented. They categorically denied any plans for negotiations with Kabul even before their first round of talks in 2015, but proceeded to meet with the Afghan government with the facilitation of Pakistan in Murree in July of that year.

However, soon after the first round of talks, the Taliban publicly adopted a stance of absolute resistance to further negotiations with Kabul. “As long as Afghanistan is under occupation, we will not negotiate with anyone,” said Taliban spokesman, Zabihullah Mujahid, in December 2015, to queries regarding a proposed second round of talks with the Afghan government. This, when the Taliban were making preparations for another meeting with the Afghan government’s representative.

The refusal represented the confusion prevailing after news of the death of their Supremo, Mullah Omar, broke but the Taliban’s hesitation to hold peace talks also owes to other factors.

Well-known defence analyst, Dr. Riffat Hussain, explained that even the Quadrilateral Coordination Group (QCG), comprising Pakistan, the US, China and Afghanistan, is not ready to give any concessions to the Taliban, who have set three conditions for talks, namely a deadline for the withdrawal of foreign troops, the cessation of drone attacks against them, and the release of some prisoners.

Having freed themselves from the influence of regional countries by shifting their bases to southern Afghanistan in the last two years, the Taliban are now feeling freer to hold a peace dialogue on their own terms.

Entering into negotiations unconditionally is dangerous “ for our unity and for keeping the morale of our foot soldiers up,” said a Taliban commander.

So for the last seven years the Taliban have held “talks for talks” — ie. talks to establish and articulate conditions before they will agree to peace talks. In 2011 and earlier, several rounds of such talks were held, but with no results, because the Taliban’s pre-conditions were allegedly never met. Kabul and Washington, meanwhile, blame the Taliban’s policy of violence as a key factor for the failure of the peace process.

Nonetheless, the killing of Mullah Omar’s successor, Mullah Akhtar Mansoor by a US drone strike last year, had seen the QCG’s activities coming to a halt, and the Taliban taking a hardline on any negotiations for peace.

Experts maintain that uncertainty surrounding Afghanistan is not limited to the Taliban’s stance on the peace process alone. They contend it has roots in the growing complexities of regional and international politics.

And with peace talks remaining elusive, the Afghan Taliban have recently escalated their attacks, targeting military installations in the northern, southern, eastern, western and the south-western parts of Afghanistan.

Meanwhile, Trump, unlike his predecessor, has committed more troops to Afghanistan, with plans for more military interventions there. But, simultaneously, efforts to bring the Taliban to the table have also intensified. The QCG resumed its process after a lull of two years, with a meeting in Muscat in October.

But going by eye-witness accounts, this did not result in any breakthrough. Diplomatic sources disclosed that at the Muscat meeting, the QCG only discussed some self-contradictory strategy, arriving at a vague consensus at the end. “It was decided to continue operations inside Afghanistan, and to solicit help from other regional countries like Russia, Iran, and Saudi Arabia, and the ulema to bring the Taliban back to the negotiating table.”

Analysts question why the Taliban would agree to unconditional talks when they still have the capacity to seize areas and launch destructive attacks. A case in point: the SIGAR (Special Inspector General for Afghanistan Reconstruction) report acknowledges that Kabul has lost control of over 41 per cent of its area.

October ended the lull in Taliban activities, when they launched several high-profile attacks in the strategically important Ghazni, Ghor and Kandahar provinces within four days (October 16-19), besides a bloody attack in Kabul’s mosque killing 140 people. In November they targeted security installations in Farah and other provinces. And the attacks continue. While the Taliban managed to occupy certain areas earlier in the year, they seemed primarily focused on consolidating earlier gains.

“I think Kabul must now review its policy, it must be ready for give and take, for accommodating the Taliban, as the current policies have endangered the Afghans,” said Sami Yousafzai, an expert on Afghan affairs in a chat with Newsline.

An official at the Afghan Foreign Ministry, contended that arriving at any consensus on Afghanistan would be really difficult since, apart from other factors, certain Afghan officials are personally not interested in peace, with blame games and regional politics ruling the day in Kabul.

And alongside exchanges between delegations from Washington and Kabul and Islamabad, and the Pakistani military action over the tip-off from US officials to rescue an American-Canadian family in October, mistrust and irritants persist, which generate more instability in the region.

For starters, despite verbal assurances from the US, officials in Islamabad have niggling reservations about the growing role of India in the region. Recent cross-border attacks, the Afghan and US officials’ accusations against Pakistan for tolerating the Haqqani Network’s safe havens, and Islamabad’s denials are not conducive to a healthy working relationship.

Eminent defence analyst, General (R) Talat Masood told Newsline that Pakistan has already communicated to the Haqqani Network’s militants to leave the country. This, he says, is likely to decrease the US pressure on Pakistan. But, he adds, a solution to the peace issue has yet to be found.

Pressure exerted on the US Congress by the Pentagon, last month, to delink the Lashkar-e-Taiba (LeT) from the Haqqani Network, may reduce bilateral irritants between Washington and Islamabad, but they cannot guarantee peace in Afghanistan.

It is not just about Pak-US-Afghanistan ties. The war of words and games among Russia, the US, Iran, Pakistan and India all stymie consensus for peace in the region.

Dr. Hussain maintains that in an environment where mistrust is so widespread, peace could only be a dream.When his view on a possible solution to the Afghan issue was sought, Afghan Ambassador to Pakistan, Omer Zakhilwal, told Newsline that Afghanistan provides a test case for rival regional countries, including Pakistan, India, US, Russia, Iran and Saudi Arabia.

“All the countries together can achieve this feat (peace in Afghanistan) but with different roles and responsibilities, with bringing different assets, concerns and angles to the table,” he said.

In an interview, Foreign Minister Khawaja Asif said Pakistan’s influence over the Afghan Taliban had waned, and also urged other countries to engage with the Taliban.

“Of course, uncertainty is counter-productive and Afghanistan is in even greater confusion today than it was in 2015,” said Dr Hussain.

Foreign Ministry spokesman, Dr. Mohammad Faisal, says that Afghanistan is a complex issue and only time will tell how peace can be restored in the country.

So far, prospects on this score appear dim.