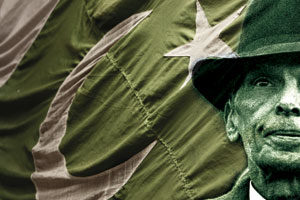 No religious freedom: Jinnah’s Pakistan was dealt a severe blow in 1974 when Ahmedis were declared a non-Muslim minority.

Laws are meant to discipline and protect. In Pakistan, not all laws do either.

Recently, especially after the cold-blooded murders of Salmaan Taseer and Shahbaz Bhatti, a good part of the Pakistani blogosphere voiced opinions against the abuse of the Blasphemy Law. Much has been said — a stronger part of which has been silenced — on its exploitation. However, what I still long to hear from my Pakistani friends is a strong word of condemnation on the specific anti-Ahmedi laws of the country.

The situation is so bleak that many people are completely unaware of these draconian Laws. In April of 1984, Zia-ul-Haq issued the opprobrious anti-Ahmedi Ordinance XX. As if the hatred spread by the mullah brigade was not enough to castigate them, it was decided that rigorous imprisonment and fines would be utilised to chastise the Ahmedis.

Many Ahmedis, including three of my maternal uncles, were rounded up in various parts of the country. Some were guilty of saying the Islamic Creed, the Kalima, which is a proclamation of the oneness of God and the truth of Prophet Muhammad (pbuh). How ironic. Others were jailed for using words and epithets on wedding and business cards that are supposed to be used by state-defined Muslims only. The law forbade the use of words such as “InshAllah” (God willing) and “Bismillah” (In the Name of Allah). To say the salaam was also declared a crime. Each of these ‘crimes’ was punishable by three years of imprisonment and a fine.

The mullah brigade did not stop there. An important question arose: was the three-year imprisonment enough for such heinous crimes? The death penalty was suggested. Ahmedis were declared worthy of being killed or wajib-ul-qatal. The Azan or call to prayer was banned in Ahmedi places of worship, which were refused the title masjid or mosque. To refer to them as such or to refer to any Ahmedi as a Muslim was declared an offence under the law. Reciting the Quran or praying in public or carrying out any other acts that made the perpetrator appear a Muslim were declared punishable with three years in jail. On one side of prison sat rapists and murderers and on the other sat those who had recited the Kalima or said the salaam.

Jinnah’s Pakistan had already been dealt a severe blow in 1974 when Ahmedis were declared a non-Muslim minority. A second major blow came with the institution of these ruthless laws. These laws still exist and continue to tarnish Pakistan’s image in the international arena. Time and again, they are used by the right-wing brigade to ‘discipline’ the Ahmedis.

As Pakistan has introduced the laws, I make a humble plea to my Pakistani brethren. In fact, I do not ask too much from you. I do not ask you to accept me as a Muslim because I know I will be wrong if I take God’s position of being the ultimate Judge of one’s faith and give it to you: my faith is personal between God and me. I do not ask you to believe in my interpretation of faith because I understand that difference can be healthy. I do not ask you to stop thinking of me as a heretic in society: you are free to hold whatever belief you want about me. What I ask you to do is fight the injustice and bigotry in these laws. I ask you to speak up against diabolical conspiracies in the name of righteousness. Charity, I believe, should always begin at home. You are my home. Do not turn a blind eye. End the apathy.

After Mumtaz Qadri’s ascension to sainthood, I have lost all hope with the ultra-conservatives of Pakistan. They have disappointed me enough. My question is to the so-called ‘moderate’ class of Pakistan. When will you stand up against the decades of injustices against me? Do you not have hearts to feel my pain? How ironic is it that an Islamic Republic should harass its citizens for saying the Kalima and the greeting of peace. Do you not see the absurdity of these laws? If not for me, if not for the absurdity of the laws, speak up for the sanctity of the “Green Crescent” and the honour of its “Quaid.” Don’t you see the bad name these laws bring to Pakistan when its religious freedom (or the lack thereof) is put to question?

I still have hope in you. But I am afraid, if you fail to stand up for my cause, for my (and even your) basic rights in Pakistan, you will equally share the blame. If you fail to consider this your cause, your silence will count you in as complicit.

I have waited long, too long, and I still wait and I shall continue to InshAllah (p.s. please don’t report this).