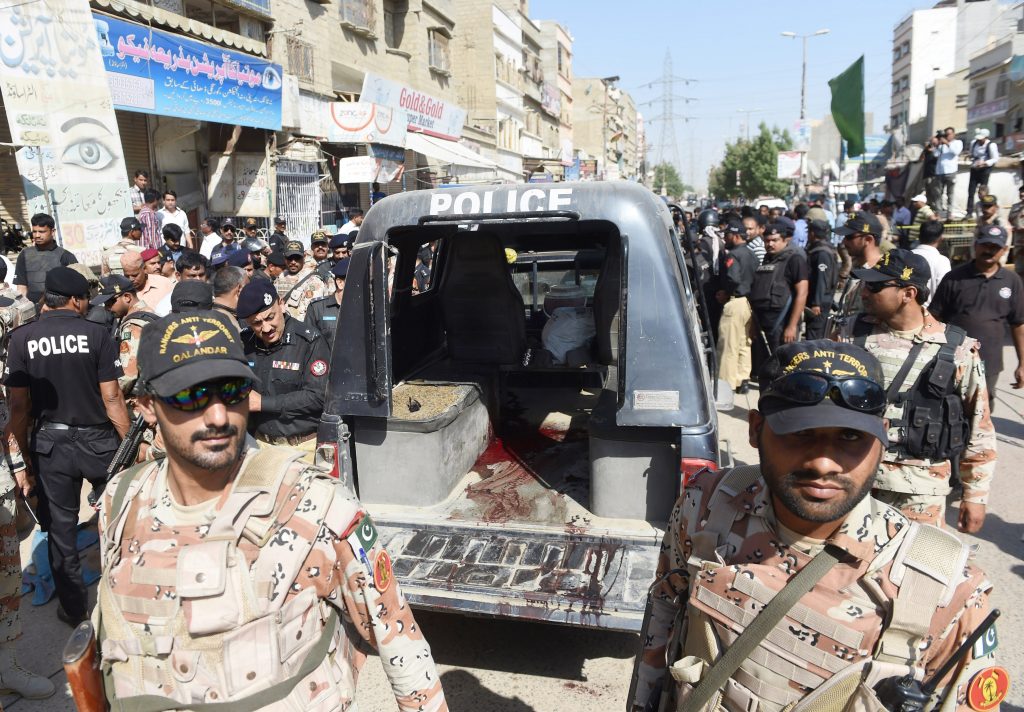 The Pakistan Bazaar police station in Orangi Town is in the same neighbourhood as a Deobandi madrassah called Jamia Hanifia, which is adjacent to a mosque named after the Emir of Qatar, across the road from a Shia imambargah and near a hospital run by Al-Khidmat, the charity wing of the Jamaat-e-Islami.

This geography gives some idea of how religion has been infused into daily life in Orangi Town. At the gate of the police station there is a 15-foot-tall board which lists the names of more than two dozen policemen who have lost their lives in the line of duty. “Soon the names of the recently fallen men will be added to it,” said a constable at the gate.

On April 20, seven policemen, who were guarding a World Health Organisation team overseeing a three-day anti-polio drive in Orangi town, were gunned down by men on motorbikes. Their killings were another ghastly reminder of the inter-mobilisation between sectarian organisations and jihadi terror networks, as well as showing how ill-trained the police is in dealing with such attacks.

The involvement of Lashkar-e-Jhangvi (LeJ) in the deadly attack did not come as much of a surprise. The banned anti-Shia militant organisation has been collaborating with Al-Qaeda and various factions of the Tehreek-e-Taliban Pakistan. It has done so by providing manpower for militant attacks in Karachi planned by the TTP. It also has a motive to go after the police since it has suffered a blow to its organisational network during the ongoing operation in the city. Many of its hardcore militants have been killed in recent months in ‘encounters’ with the police and the Counter-Terrorism Department while others were arrested in raids on their hideouts.

LeJ provincial chief Attaur Rehman, alias Naeem Bukhari, and ringleaders like Sabir, Rashid Ganja and Asif Chotu are in custody, while many others are on the run. But the LeJ danger still persists. Some suggest that the cycle of vengeance from both sides is only adding to the violence. These latest killings mean that more than 300 policemen have been murdered since the Karachi operations began in September 2013. The majority of the attacks have taken place in Orangi Town, Baldia Town and Gadap Town, all of which are infested by jihadi outfits, criminal gangs and sectarian militants.

Orangi Town has traditionally been an MQM stronghold, and has not faced any serious opponents at the ballot box but has been at the receiving end of ethnic violence. Militant religious groups like the Ahle Sunnat Wal Jamaat (ASWJ) have started gaining support among the Bihari and Bengali communities. Areas around Gulshan-e-Bihar, Islam Chowk and Iqbal Market are infested with ASWJ flags and graffiti. Attempts by the MQM workers to remove these flags and whitewash the graffiti led to armed encounters and retaliatory attacks resulting in killings on both sides, with the MQM bearing the brunt of the attacks. 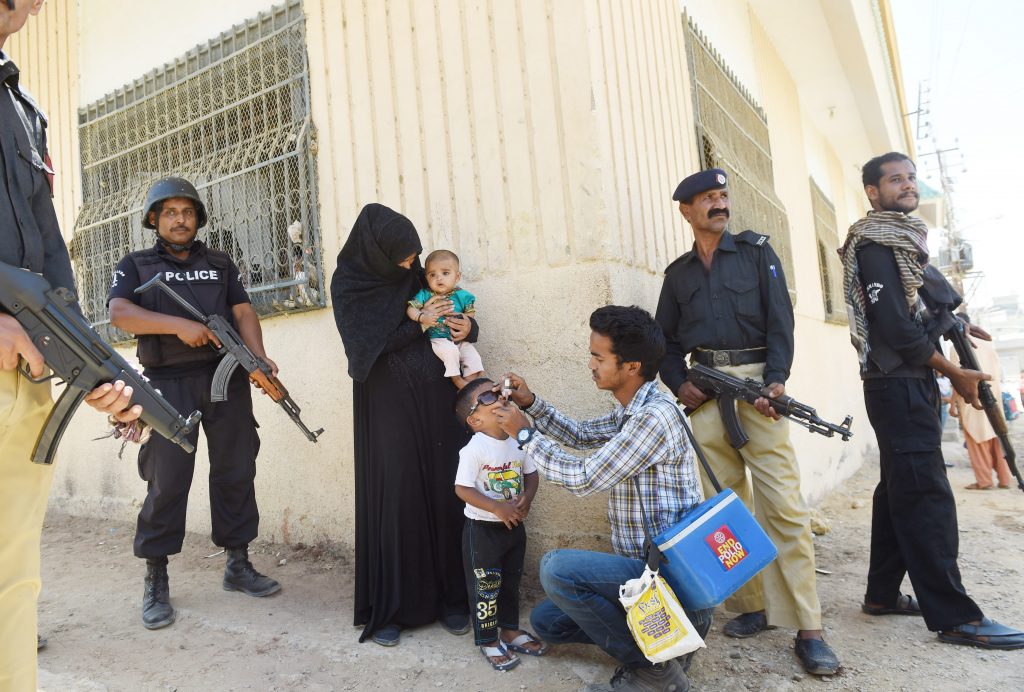 “The ASWJ was backed by the well-equipped and well-trained militant cadres of jihadi organisations and the LeJ, and it helped decimate MQM militant support in the area,” an MQM supporter said. Manzar Imam, an MQM lawmaker from PS-95, was the most prominent among the MQM workers who have been killed in this conflict. “Manzar Imam’s only crime was his association with the MQM. He belonged to a Deobandi family and was a regular participant at the Tableeghi Jamaat’s annual gathering in Orangi Town,” said a member of the Tableeghi Jamaat. “He was killed by the LeJ and had 80 bullet wounds on his body,” said a local MQM worker. “Before this, MQM MPA Raza Haider was assassinated in August 2010 in Nazimabad by the LeJ and the killers were nabbed from Orangi Town.”

It is that muscle power which has allowed the ASWJ to secure more votes than any other party against the MQM in these constituencies. The ASWJ is also competing with the MQM on another front: generating funds through the collection of sacrificial animal hides. “During Eid Ul Azha in 2013, local MQM units approached us days before Eid and asked us to demarcate areas with them so clashes could be avoided. We collected 3,000 hides of cows and bulls worth 16 million rupees from Orangi Town,” said a prayer leader associated with the ASWJ. After the Karachi operation was launched, the ASWJ has been weakened as many of its workers were arrested, many militants killed and the rest are in hiding. But small splinter groups still retaliate by attacking members of law enforcement agencies and the police happens to be the easiest target.

The anti-polio campaign too has benefited from the improving law and order situation across the country, as seen by the drastic fall, both in the number of confirmed polio cases and the attacks on polio workers. So far this year there have only been eight polio cases as compared to 54 in 2015 and an amount more than double that in 2014. Karachi is particularly vulnerable to the polio virus, since it is a destination for those migrating from rural areas and war-torn countries like Afghanistan. It is also a way station for travellers making their way to other cities.

The first polio case of the year appeared in Karachi in February when a two-year-old boy in Gadap tested positive for the virus. Right-wing newspapers have run a massive campaign against polio vaccinations, claiming it is both low quality and causes other health issues. The wide circulation of these papers has contributed to the spread of conspiracy theories about polio vaccinations.

WHO officials claim these campaigns were started when Urdu dailies approached them and tried to extort money. In recent months, the situation has improved. The strategy of deploying religious clerics to convince people of the safety and necessity of the vaccine has largely worked and clerics are now even part of the support staff hired by the WHO and UNICEF for monitoring the processing and collection of data.

“The whole campaign against the polio vaccines drive is based on ignorance, lack of information and relying too much on hearsay. But people have started listening now,” said M Ibraheem, a support officer at a Union Council in Keemari. “The strategy to get the local communities involved and employing women aid workers from there and providing them opportunities to perform their duties in the areas around their homes have helped improve the campaign.”

But fear has re-emerged after the recent killings of the seven policemen. The incident has reaffirmed the notion that the police is serving as the first line of defence against terrorist attacks and emphasised the need to keep strengthening the police so that polio workers can go about their work
without fear.