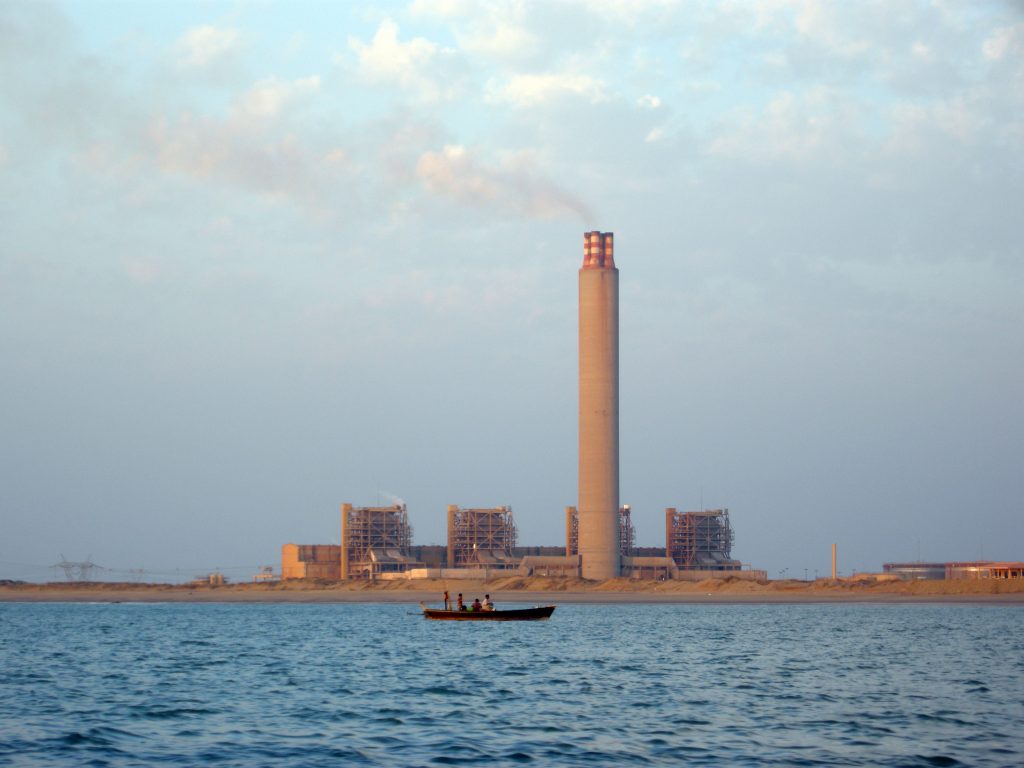 The proposed plan by the Hub Power Company (Hubco) to construct a coal-fired power plant and barge jetty at Gaddani beach in Lasbela has led to major differences between government officials and the communities they ostensibly represent.

Jam Kamal Khan, the scion of former chief minister Jam Yusuf and a state minister from the ruling Pakistan Muslim League-Nawaz (PML-N), stands alone in support of it while all the other parties, including the Pakistan Peoples Party (PPP), the National Party Balochistan (NP) and the Balochistan National Party (BNP), oppose it. Most prominent among them is the former speaker of the Balochistan Assembly, Sardar Aslam Bhotani, who is a friend-turned-political-rival of Jam Kamal Khan. Residents of the goths around the Hubco premises too have voiced their concern over the proposed project despite all the renewed promises and assurances by the company regarding its benefits and the window of opportunity it will provide for the locals.

Owing to this opposition, the company and its partners now have an uphill task to convince locals of the merits of the project and get the support of the political representatives from Lasbela district.

“We are not against investment, especially if it is coming from our friend China, but they must take our concerns into account and not pour millions into a hazardous project,” says a civil society activist Faisal Mundra.

“We would not let them go with the plans without addressing our apprehensions regarding building a hazardous power project,” said Maula Baksh Laasi, a student of the University of Marine Sciences, Uthal. “We have genuine concerns over the impact of this project on the environment and our coastal belt. Most of the locals are poor labourers and fishermen, and the effects of a coal plant will be disastrous in terms of health hazards and threats to sea life.”

In the 1990s, the federal government, in cooperation with the World Bank, established Hubco in Lasbela, a coastal district of Balochistan. The power company had to add about 1,300 MW of electricity to the national grid.

At the time of its inauguration, Hubco had pledged to provide free electricity to three adjacent villages, Goth Qadir Baksh, Allana Gadur and Abbas Gadur, preferential treatment to the locals in terms of employment opportunities and extensive plantation in Kudn Gaddani to curb the environmental effects of their projects. However, none of these pledges have been fulfilled.

The power generated by Hubco in Balochistan goes to the national grid and the district gets back very little in return from its own contribution towards power generation. Lasbela is affected by long hours of power shutdowns, affecting the industrial zone and the agriculture sector. Whatever share it gets is at the whim of Karachi Electric (KE) – another cause of grievance among the locals.

“K-Electric has obstructed the process of providing relief to the agriculture sector in terms of power supplies to the tube wells,” says Ali Baksh Brohi, a grower from Tehsil Winder. 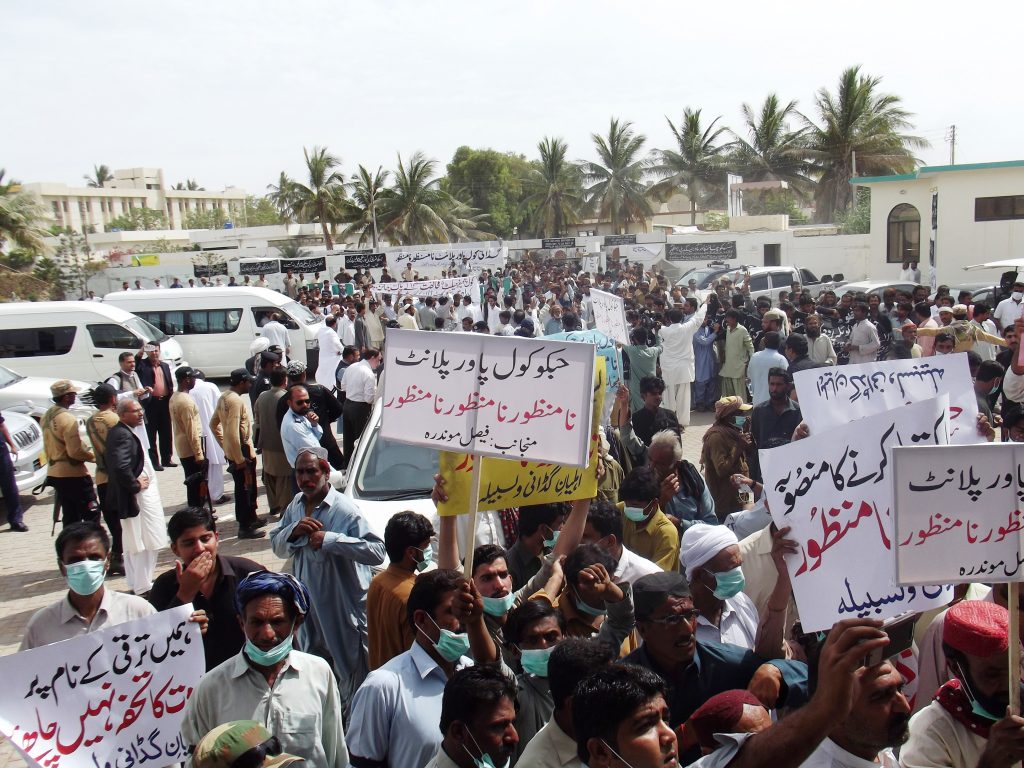 olitical activists allege that the supply of the electricity is going to Sindh and Punjab and locals have to deal with the environmental fallout of Hubco’s activities. Similar complaints have been brought forward in various meetings and protests against the plan.

The proposed project has two coal-fired power plants of 660 MW each. It will collectively produce 1,320 MW of electricity. The company has aimed to add more to it in the future.

“The electricity produced here will be provided to Faisalabad and Lahore. Balochistan will get only pollution and health hazards,” a political activist alleged.

Aslam Bhotani, who has emerged as a fierce opponent of the proposed plan, says, “The company has a bad track record for not keeping their word and their projects have provided nothing to the locals except for a few petty jobs. About 11 people have been employed so far from nearby areas and those too only for menial jobs. Locals have received no training to be able to work in the power plant.”

Bhotani has appealed to the Balochistan High Court against the proposed project. Civil society members, political parties and various social sector organisations have sent hundreds of protest letters to the Environmental Protection Agency (EPA) asking them not to issue a No-Objection Certificate (NOC) to the plan.

On March 28, the EPA held a public Environmental and Social Impact Assessment hearing at the Lasbela Industrial Estate Development Authority (LIEDA) auditorium in Lasbela. Shoaib Gola, the Secretary EPA Balochistan, while setting the context of the hearing, said that they received over 2,000 letters in one month against the proposed project

This was the first time in Lasbela’s history that a public hearing was held by the EPA before issuing an NOC to a project by foreign investors. During his presentation, the CEO of Hubco reiterated his pledge to curb environmental pollution and said they would be using modern technology, which would cause no environmental hazards. However, given its past record, people present at the auditorium and outside were chanting slogans against the company and their officials.

Among other officials of the EPA, Ali Bizenjo, the director, and Mehboob Baloch, the assistant director, were present on the occasion. Hubco was represented by Khalid Mansoor and he was accompanied by his Chinese counterparts from the China Power Hub Generation Company (CPHGC). 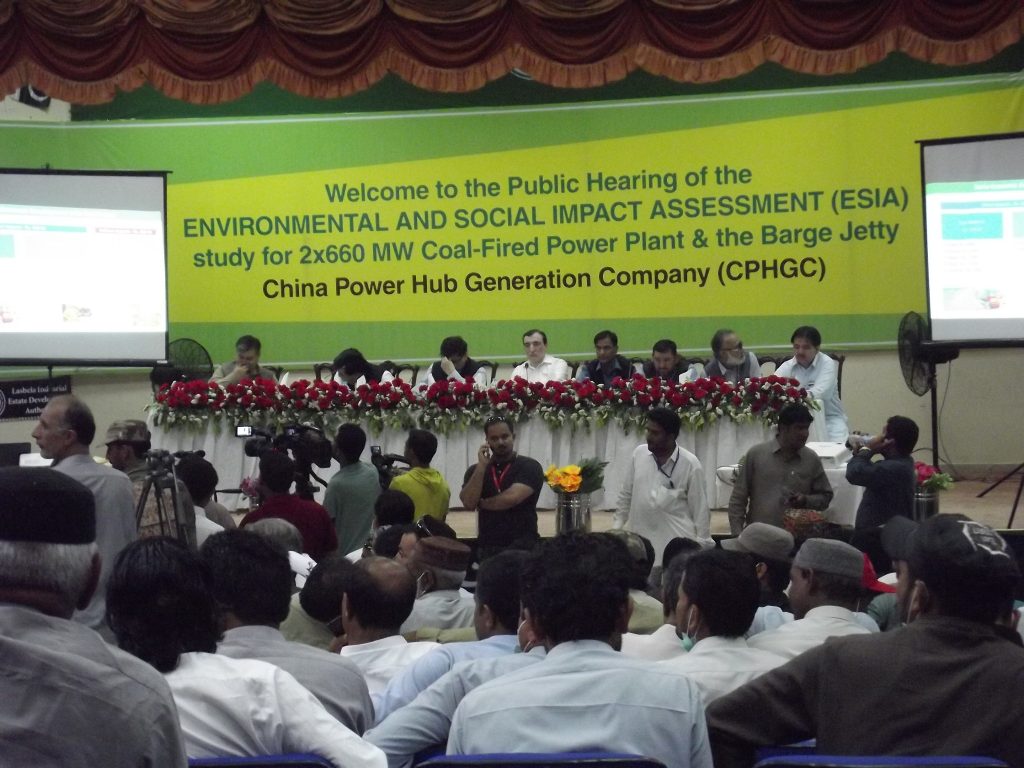 Aslam Bhotani made a detailed presentation on the project and said that at a time when developed countries are shutting down their coal plants and trying to find alternative sources of energy, Hubco has come up with the idea of bringing a technology which will soon be obsolete. He said, “The whole world has come together to address the issue of climate change and has been investing in ways to thwart the threat. Hubco’s designs are exorbitant and, to make it worse, the production will hardly help locals. The project will benefit industries of Lahore and Faisalabad and not the people and industries of Balochistan.”

He continued, “The power plant will consume 7,000 metric tons of coal in a day. The pollution caused by this and the thought of health issues is simply outrageous. At a time when the UN is insisting coal-producing countries abandon coal and seek alternatives, coming up with a plan to invest in coal cannot be appreciated.”

The UN has proposed a deadline of 2020 for abandoning coal as the main source of energy and many European nations have abided by the UN requests and announced plans to shut down coal-based power plants in the coming decade. China too has announced closure of a major portion of its coal mines.

Those in support of the coal-based project are giving the precedent of India, which has been producing 59 per cent of its electricity using coal. But one should not ignore the criticism it has drawn for sticking to it. Bhotani produced detailed statistics of the environmental and health hazards of the coal-fired plants in India.

The area around Hubco’s premises has a population of about 30,000 people but the company has barely invested in infrastructure development, building schools or health facilities and they only set up a free eye camp once a year.

Jan Mohammad Buledi, a former spokesperson of the provincial government, said at the meeting, “The people of Balochistan are not willing to trust the multinational companies. These companies have been consuming our resources, but have offered nothing in return.”

Mohammad Sharif Pillai, president of the PPP in district Lasbela who himself is a resident of Gaddani, said, “Hubco has given us worries and problems only. People have lung infections, asthma etc due to pollution from their projects and the area has hardly seen any rise in the rate of employment or increase in economic activities.”

In response to the Hubco CEO’s excuse of not hiring locals because of the unavailability of skilled labour, Pillai said, “It should be the responsibility of the concerned department, as well as the company, to facilitate locals with training opportunities and provide them work-based apprenticeships.”

A civil society member from Lasbela, Amanullah Laasi said, “This affects our existence. If the project gets a go-ahead despite all our reservations, our trust in the central government will further erode.”

Shoaib Gola, secretary EPA, declared that the NOC will not be issued without addressing all these concerns. “It is heartening to see that people are aware of environmental hazards. We will not overlook the concerns of the people and this is what the central government should consider as well.”

Despite all the concerns from the locals and their political representatives, the Private Power and Infrastructure Board (PPIB) issued a letter of support (LOS) to China Power Hub Generation Company (Pvt) Limited (CPHGCL) for the development of the plant.

In a ceremony held in Islamabad, officials of PPIB and the Chinese company signed the documents. The document was signed by PPIB Managing Director, Shah Jahan Mirza, and the CEO of CPHGCL, Mr. Zhao Yonggang. Mohammad Younus Dagha, the Secretary, Water and Power, and other senior officials of the PPIB and the Ministry of Water and Power were present at the occasion. For now, it seems as if there is no stopping the project.