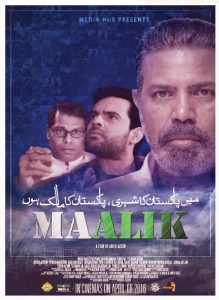 That Maalik has flopped at the box office is not much of a surprise. This is a film that relies on lazy ethnic stereotypes, ugly misogyny and a contempt for democracy.

Written and directed by Ashir Azeem, best known for TV serial Dhuwan, Maalik is about a retired SSG commando (played by Ashir himself) who now runs a private security company. What could have been an opportunity for an examination of our (in)security culture and the seamless way in which army men move between the public and private sectors, instead becomes a Pakistani version of The A-Team. These mercenaries may charge their clients exorbitant amounts but if they feel a cause is good enough they will do it for free.

Reflective of the film’s gender politics, the security company has a token, hot woman just for eye candy. Most of these criticisms, and many others, were used, first by the Sindh government and then the federal government, to ban the movie three weeks after its release. It should go without saying that bad taste, of which there is plenty in Maalik, should not lead to a ban. Ashir is obviously Punjabi while the villains are stereotypical Sindhi waderas. These waderas go around raping village girls and need the noble Punjabi men to rescue them. An unnecessarily shoe-horned romance between a Punjabi boy and a Pathan girl similarly relies on broad stereotypes.

The women problem in Maalik can be summed up by a stuffed animal. This toy is the crutch that is used by Azeem’s wife (played by his real-life wife Bushra). She cannot do without the toy, whether in bed or at the breakfast table. In the end, tripping over it even leads to her untimely — and ridiculous — death. Many films flirt with misogyny but only, Maalik is so unashamed by it that it literally infantilises one of the very few women in the movie. Other women in the movie exist only to be rescued by men. There are the village girls who are raped and a student who is kidnapped. Their only function is to give the Punjabi men something to do.

Curiously, most of the first half of the film is in English even though none of the actors possess the fluency to pull this off. Maalik, is a deathly serious film which causes only unintentional humour with the stilted delivery of actors clearly not used to emoting in English. There is an overabundance of subplots whose only purpose seems to be to take the film to the excruciating three-hour mark.

The one consistent theme throughout is that all politicians are evil and corrupt while everyone in the army is noble. Equally laughable is what passes for editing, with sudden jarring shifts that make no thematic or narrative sense. The acting, especially by Hassan Niazi as the wadera chief minister, is the only saving grace of an ugly movie.