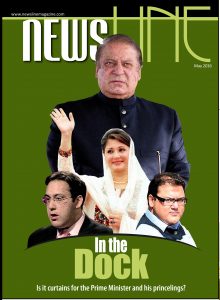 Laptops. Motorways. Gas Projects. Grants. Health cards. Cuts in power tariffs. Manna from the Sharif Haven. Ask and you shall be granted.

The Prime Minister of Pakistan, now on a meet-the-people tour, is in a benevolent mood. The Panama Leaks seem to have brought out the `best’ — and the `worst’ — in the PM.

Why, he even agreed to meet with his cabinet — after a hiatus of seven months. Last time it was Imran Khan’s 100-day dharna that forced him to make regular trips to the National Assembly — 17 out of 19 sittings, as against only seven in his first year in office.

Incidentally, the cabinet met to “laud” the PM for emerging unscathed (!!!) from the Panama Leaks, and to warn the opposition, especially the Pakistan Tehrik-i-Insaaf (PTI), that the Sharif government would not be making any changes in the Terms of Reference (ToRs) it had laid down for the expected judicial enquiry commission on the Panama Leaks.

The government’s ToRs want the commission to go back many, many years in time and investigate all cases of money laundering and loan defaults. An exercise that, experts say, could take forever. Not that the First Family is in any hurry.

The manner in which they have handled Panamagate reeks of impropriety.

The clips and clippings from the print and electronic media, among them the BBC and The Guardian, quoting members of the Sharif family on their alleged offshore accounts and London properties, all contradicting each other, reveal that all is not kosher in the House of Sharif.

But far from showing any embarrassment, they are brazenly branding this a conspiracy against them. Shockingly, in the PML-N coterie’s figment of imagination, it was hatched by the US, Israel and RAW.

If fellow countrymen were expecting the PM to step down, like the Iceland Prime Minister, or to present himself before Parliament like the British PM, with facts and figures to prove his innocence, they were being presumptuous. When have the leaders of this country ever stepped down on being caught with their hands in the till?

The PM decided to fight his battle through the media instead — and at state expense. It would not be inappropriate for the public to demand to know how much was pulled out from the public exchequer to pay for the dozens of ads proclaiming his innocence that were placed in various assorted newspapers and aired on TV channels.

The PM’s coterie, meanwhile, is engaged in a war of words with the opposition, and, more specifically, running a smear campaign against Imran Khan and the Shaukat Khanum Hospital.

Admittedly, Khan and his PTI have got a new lease of life. The captain could resort to a dharna, part 2, if the judicial commission does not materialise.

Initially the actual leader of the opposition, the PPP, didn’t quite know how far to go (or not go) with the PTI in its anti-Sharif mission, given the many skeletons in its own cupboard. But for now it has taken the lead in getting the opposition together, with Aitzaz Ahsan at the helm.

The PML-N would have us believe that the opposition is trying to destabilise democracy. Does that mean one should stop asking uncomfortable questions about the First Family’s alleged financial shenanigans?

If there were, indeed, a threat to democracy, shouldn’t the prime minister lead by example and present the First Family for accountability first – without wasting any more time?