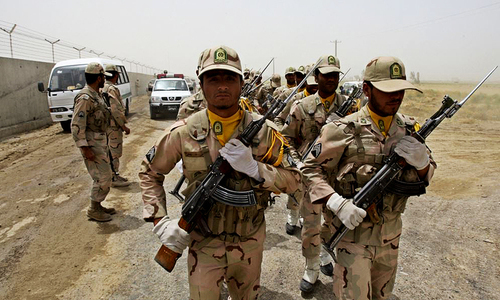 The Jaish Al Adl, an outlawed group, claimed responsibility for the attack that killed 10 Iranian security guards on the border.

On May 27, Iranian security forces fired across the border into Pakistan’s Panjgur district and a man was killed when a mortar shell hit a vehicle.

This was not the first incident of cross-border fire by the Iranians. As was the case in the previous such incidents in the recent past, Pakistan protested against the violation of its border. The two sides agreed to convene an emergency flagstaff meeting of their military commanders operating in the border area to consider measures to ensure that such incidents are not repeated in the future.

However, the Panjgur-like incidents keep happening almost regularly, fuelling tension between the two neighbouring Islamic countries. The 909 kilometres long Iran-Pakistan border links Iran’s Sistan-Baluchestan province with Pakistan’s Balochistan. Living on both sides of the border, the Baloch people generally complain of neglect and even oppression by the two governments. Like the Pakistani and Afghan Baloch, the Iranian Baloch people are Sunni. Some among them accuse the overwhelmingly Shia-populated Iranian state of discriminating against them. Area-wise, Sistan-Baluchestan is the largest out of Iran’s 31 provinces, and also the poorest.

The Pakistani Baloch people too have a long list of complaints, including denial of rights, and the separatists and nationalists among them have picked up the gun and fought against the state. There have been five military actions in Balochistan since Pakistan’s independence, but a low-level insurgency continues even now.

Some Baloch in Pakistan have a yearning for creating an independent homeland of Balochistan by employing every means, including force. There are also vague ideas of uniting the Baloch living in Iran and Pakistan, along with the smaller number inhabiting Afghanistan, into this imaginary new state. Some Baloch leaders, including Mir Suleman Dawood, the Khan of Kalat presently living in self-exile in the United Kingdom, want all the Baloch living in the world, including those in Oman and Bahrain, to become part of an independent Balochistan. The Baloch in Pakistan are far from united and consequently not strong enough to fight their way to success to create an independent Balochistan state. Many more Baloch are pro-Pakistan and content to do peaceful politics in the federation of Pakistan.

The unrest in Pakistan’s Balochistan and Iran’s Sistan-Baluchestan has fuelled cross-border issues that have been haunting Iran-Pakistan relations for years. Tehran has long suspected the US, UK, Saudi Arabia and even Pakistan of backing and harbouring elements bent upon destabilising Iran. But the Iranian government doesn’t always mention Pakistan in this list as it has received occasional cooperation from Islamabad to tackle the Iranian Baloch militants hiding in its territory, particularly Balochistan. In fact, the late Jundallah (“Soldiers of God”) head, Abdulmalik Rigi’s brother, Abdulhamid Rigi, was captured along with 13 other militants by Pakistani authorities in 2008 and handed over to Iran, where he was hanged to death on May 24, 2010, on charges of terrorism. Abdulmalik Rigi, too, was captured by the Iranians and put to death in June 2010. 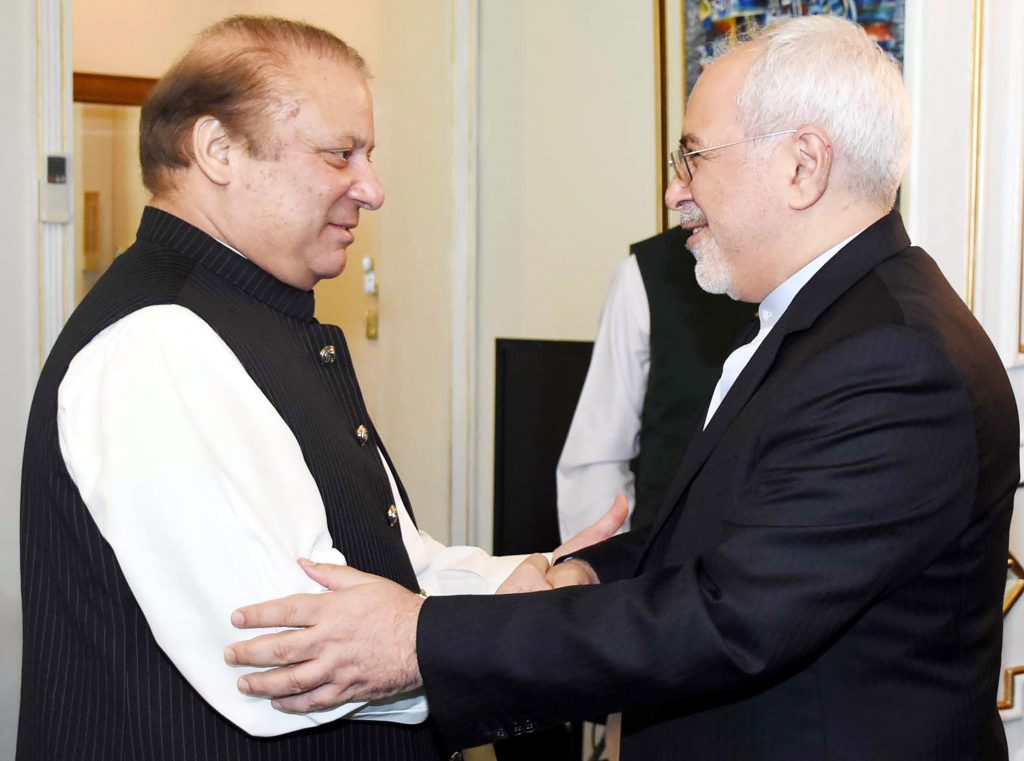 However, Iranian officials have recently taken an increasingly tough line against Pakistan. Though the border incident on April 26, 2017 in which 10 Iranian security guards were killed by the Sunni Baloch militant group, Jaish al-Adl (Army of Justice), was the trigger for the hostile statements coming out of Tehran, it wasn’t the first time that the Iranian officials used threatening language against Pakistan. The threat by Iran’s armed forces Chief of Staff, Major General Mohammad Baqeri, issued soon after the above-mentioned incident was just the latest of such statements. Baqeri had warned that Tehran would hit militants’ bases inside Pakistan if Islamabad did not confront those carrying out cross-border attacks in Iran. Reminding Pakistan that Iran cannot accept the continuation of the situation, he asked Pakistani authorities to control the border, arrest the terrorists and shut down their bases.

Pakistan protested the remarks and conveyed its concern to Iran’s ambassador in Pakistan, Mehdi Honardoost, who was reminded that this attitude was against the spirit of brotherly relations existing between the two countries. In an interview with the Pakistani media later, the Iranian ambassador tried to downplay the issue by arguing that Iran and Pakistan were capable and willing to resolve the issue of cross-border attacks as it posed a danger to both. He asserted that no other force or group could determine the bilateral ties between Iran and Pakistan.

The incident on April 26 happened barely a week after a visit by Iran’s Foreign Minister, Mohammad Javad Zarif, to Pakistan at the head of a high-level delegation to discuss measures for improving border security and other issues. Pakistan assured Iran at the time that it would deploy additional troops along its border. It seems the militants and their sponsors were waiting to strike to damage any chances of improvement in Iran-Pakistan relations. The incident, in which the Iranians claimed the militants based in Pakistan used long-range guns to target the border guards, raised tensions between the two countries to an unusually high level.

This reminded one of 2014 when Iran warned it would send troops across the border to Pakistan to recover five of its border guards kidnapped by Jaish al-Adl. Pakistan, at the time, warned the Iranian forces not to cross the border and argued that such an action would be a violation of international law. The issue was eventually resolved when four Iranian guards were recovered with the help of intermediaries in Pakistan and one was killed by the militants. This and other incidents, including one in which Iran’s border guards intruded three kilometres into Pakistan’s territory in Panjgur district and killed a Pakistani citizen, though gave the Iranians an opportunity to claim that militants had their hideouts in Pakistan and that Islamabad was ultimately responsible for denying them space and restraining them from launching attacks in Iran.

Jaish al-Adl, and before it Jundallah, have claimed responsibility for a number of attacks in Iran. The former claimed that it was behind the attacks that killed 14 Iranian border guards in October 2013 and another eight in April 2015. None of these groups called for the separation of Sistan-Baluchestan from Iran or the creation of an independent state. Instead, they claimed their armed struggle was aimed at highlighting what they insisted was discrimination against the minority groups, especially the Sunni Baloch ethnic group, in Iran. The Baloch separatist insurgency in Balochistan and the lawlessness in Karachi provided the local and foreign militant groups, including Jaish al-Adl and Jundallah, a fertile ground to operate. Pakistan has reacted strongly to destroy the militants and has been able to inflict heavy losses on them, but a lot more needs to be done to eliminate them.

Pakistan did not object to Iran’s decision to build a fenced wall on their common border by pointing out that it was being built on Iranian territory. The wall was meant to keep out not only militants, but also drug-traffickers bringing opium and heroin from Afghanistan either directly into Iran or via Pakistan.

However, the Iran-Pakistan relations have come under pressure due to other factors as well. Iran’s tussle with Saudi Arabia for dominance in the Middle East has put Pakistan in a difficult position as it cannot afford to annoy one or the other. It is a tightrope balancing act for Pakistan as it has had traditionally close friendly relations with both. The latest developments following President Donald Trump’s visit to Saudi Arabia and his categorisation of Iran as the source of all the troubles in the Middle East has further drawn the battlelines and made it even more difficult for countries like Pakistan to take sides.

Though Pakistan acted wisely earlier by declining to send troops to Yemen at the behest of Saudi Arabia to fight its war, it could not say no when the Saudis invited it to become part of the 41-country Islamic military alliance against terrorism and offered the job of its commander-in-chief to retired Pakistan Army chief, General Raheel Sharif. Though the role of this Saudi-led military alliance of Sunni countries isn’t yet clear, Pakistan’s move to join and head it hasn’t gone down well in Tehran. Many Pakistanis want their country to become the mediator between Iran and Saudi Arabia, but it would remain wishful thinking unless Tehran and Riyadh show any interest in reconciliation with each other. In such a scenario, Pakistan has to make an extra effort to maintain equidistance between the two and give no cause to either Iran or Saudi Arabia to doubt its sincerity.