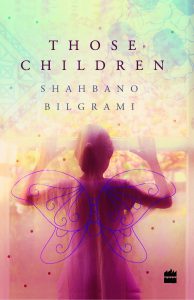 Shahbano Bilgrami is a Pakistan-born poet, journalist, novelist and children’s writer, who grew up between Canada and Karachi and now lives in the United States. Her first novel, Without Dreams (2007), was longlisted for the Man Booker Prize. Her second novel, Those Children, was launched at the Karachi Literary Festival this year. It is narrated by a 10-year-old American-born, Ferzana, and tells of her bereaved family trying to cope with the death of her mother, Najma, from cancer.

Ferzana and her three older siblings, Fatima, Raza and Jamila, then suffer more dislocation and confusion when their father decides to leave Chicago, where they have grown up, and take them back to Karachi. There they have to adjust to a new life within an extended family, consisting of their paternal grandparents, an unmarried aunt and two married uncles. All of them live within the same compound of the family home, C44 — ‘once the centre of a respectable Karachi suburb’ and now ‘an anomaly in the midst of an encroaching commercial thoroughfare.’ The children are bewildered to be among relatives, whose names they hardly know. Even the ‘heat and dust; perpetual sunshine,’ and the sound of ‘crows and rickshaws, donkey carts and rustling coconut plants’ are unfamiliar to them.

At their new Karachi school they are clearly ‘outsiders’, derided for their poor Urdu and scorned for being ‘Amriki.’ The elder two, Fatima and Raza aged 18 and 17, are accustomed to a greater independence and freedom of movement; they chafe at the restrictions imposed upon them in Karachi. Ferzana’s father, Aftab, is too consumed by his grief for his late wife to be aware of his children’s sense of disorientation. In fact, they are not allowed to mention their mother’s name in his presence. Meanwhile, there is no stopping people from remarking on Ferzana’s resemblance to Najma, her mother who quietly inhabits Ferzana’s narrative, as a living spirit.

The power of Bilgrami’s narrative lies in her ability to portray loss, sorrow and complex emotions with sensitivity, insight and humour. In strange, new and bewildering Karachi, the children long for the familiarities and certainties of Chicago. They try to cope by playing imaginary games, assuming surreal names and personalities; all this becomes as much a part of their reality as their everyday life. In their make-believe ‘alternative’ universe, Jamila is the leader, Lady M. She is obeyed and addressed with due deference by Timmer (Fatima), Dag (Raza), and particularly, Little Furry (Ferzana). These games are built in with great skill to impel the plot: Little Furry imagines herself as ‘arch snoop, supreme sleuth, super detective’ and is often assigned outrageous and, at times, alarmingly dangerous tasks by Lady M, to ferret out family secrets. This includes her determination to unravel the mystery of their paternal Uncle Shahbaz, who appears as a baby in a solitary photograph labelled ‘Dhaka’; and the somewhat confusing fact that the meetings he arranges with their maternal uncles, Salaar and Alamdar, are kept a secret from their father and grandfather.

Those Children is particularly remarkable for the nuanced portrayal of Jamila. Gradually, it becomes apparent that Jamila is ‘different’ to other children. She is mentally challenged and a little slow; her emotional responses are also more extreme; her concepts of reality and unreality are sometimes blurred. Yet in Ferzana’s account, she is a revered and loved, older sister, a figure of authority, the commanding Lady M, and so well integrated into the family that she is an integral part of the equation between Ferzana, Fatima, Raza and, indeed, their father, and the rest of the family.

The novel goes on to describe the changing lives of the children, as they start to make lives for themselves in Karachi and attempt to negotiate their way through its social mores and defy its conventions. Raza embarks on a clandestine romance with an older woman; Fatima fends off an unwanted suitor; and Ferzana, ignoring the divisions of class, finds a close friend in Shahnaz, the servant’s daughter. Gradually, Ferzana draws closer to her family elders, including Dada and Dadi. She also starts to enjoy different aspects of Karachi life, including a drive across the old city and the excitement of chand raat. Through these episodes, Ferzana learns more about the city, but often she catches conversations which are interwoven with memories that comment on Pakistan and its history. These incidents include the migration of Ferzana’s family from Lucknow to Karachi at the time of Partition; and the rise of religious extremism and sectarianism during the Zia regime. In the process, Ferzana makes a new discovery — that her parents belonged to different religious sects: her mother was a Shia, and her father, a Sunni.

Those Children explores and challenges concepts of ‘difference’ — of class, faith, sect, and indeed cultures and continents. The silence surrounding family history and family secrets also becomes a metaphor for Pakistan over the 1971 war. As the narrative expands and unfolds to reveal unexpected truths, the story of Dada and his friend Uncle Rafi, who served in 1971 as army officers in East Pakistan, alternates with the account of Ferzana’s father, Aftab, who finally begins to talk about Najma, his beloved wife, and recalls their life together. This opening up of the past leads to both acceptance and understanding and finally brings the family close together, pointing the way to new beginnings.