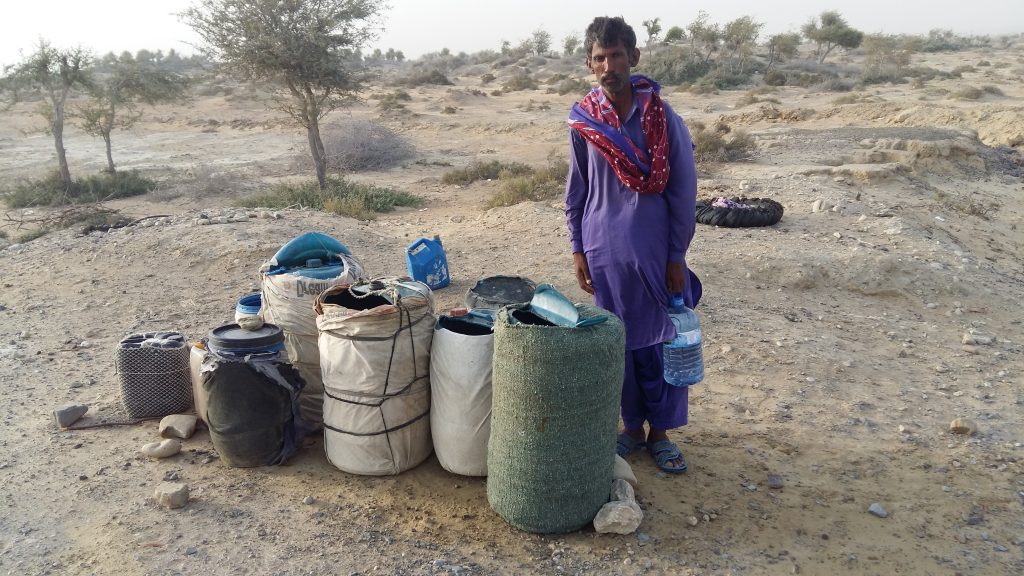 A frail and visibly exhausted man, dressed in the traditional attire of the people of the area, is standing in the scorching heat of summer along one side of the coastal highway in Lasbela district. Besides him are half a dozen empty water cans. He stands there in the hope that someone in the many vehicles that are plying the road, will recognise his plight and stop and give him some water. He does this for hours each day, trying to get drinking water for his household. Khuda Baksh, 37, a resident of sub-tehsil Lyari, located on the highway, is one of the many people of the area who are facing an increas-ingly dire water shortage. He discloses, “Sometimes I am lucky and manage to get a little water after waiting here for a couple of hours. Other times I am here from dawn to dusk, waiting in vain.”

Situated at a distance of 200 kilometres in the north west of Karachi, are the Lakra tehsil and the Lyari sub-tehsils. According to the Lasbela district administration, the approximate population of these two areas is around 25,000. Except for a few thousand people living in the main towns, the majority of the inhabitants are suffering an acute water shortage. Due to its proximity to the Arabian Sea, just 25 kilometres away, the underwater is saline and thus not fit for consumption. The only sources of water in this area are rain, the Hingol River, and water transported from other towns. Water scarcity is a problem for Balochistan’s entire coastal belt from Gadani to Jewani.

Due to the China-Pakistan Economic Corridor (CPEC), the water shortage in Gwadar does at least generate a little attention in the media, but the same problems in the hamlets and villages along the coastal belt of Lasbela have always escaped media attention. 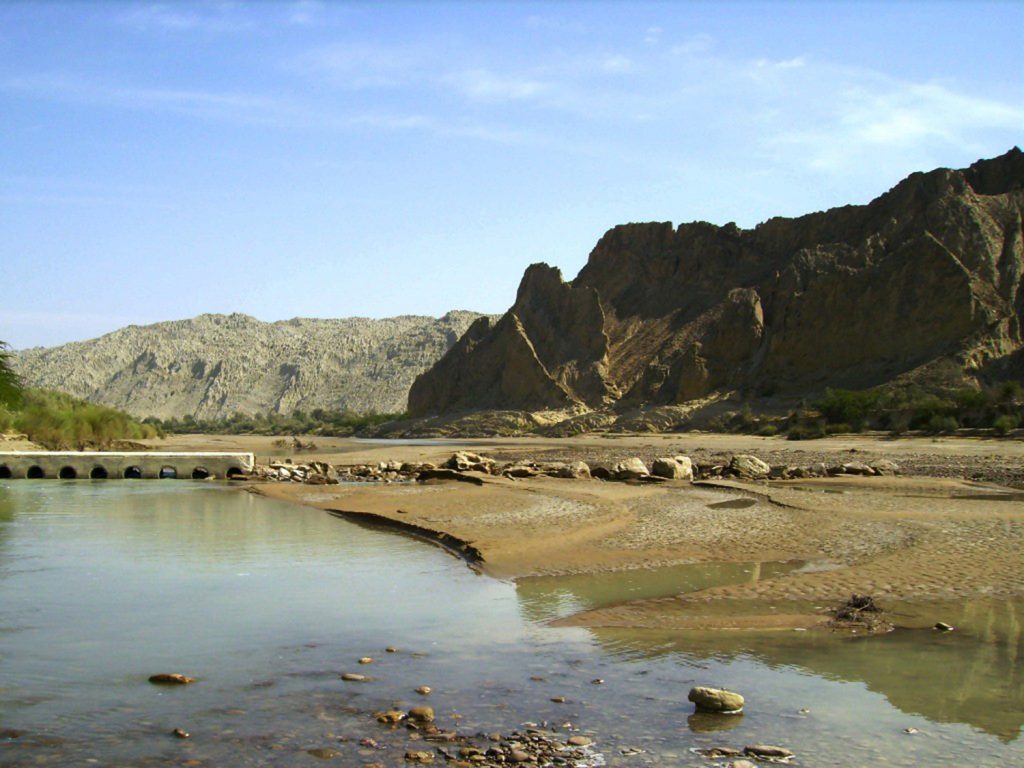 While travelling from Uthal to Kund Malir, the exotic beach in Balochistan, one can see plenty of people like Khuda Baksh standing along the road. The dearth of water is severe, especially in the areas stretching from Lyari town to Hingol on the coastal highway. Elahi Baksh, another water-seeker, revealed that sometimes his people get water from the tankers of the Coast Guard, which transport water to their installations. Empty drums are also placed at different places along the coastal highway, in which Coast Guard tankers sometimes fill water, which is later extracted by the inhabitants of the area.

At other times it is some kind travellers who carry additional water with them to give to people like Elahi Baksh and Khuda Baksh. One such person is Younus Baloch, the Assistant Commissioner of Uthal. The water-starved sub-tehsils of Lyari and Lakra fall under his jurisdiction. When he travels along the highway, he carries a dozen large bottles of water, and whenever he sees a water-seeker, he stops his official vehicle to hand him a bottle. Kind though the gesture, what Baloch is doing is, however, not even a drop in the ocean of need.

There are 18 wards and 66 small settlements in Lakra and 11 wards and 49 settlements in Lyari. The beach, Kund Malir, is also situated in the Lyari sub-tehsil, along the coastal highway. Lakra is situated further inland, adjacent to Lyari. As in the rest of the province, the population in these areas is scattered, comprising small settlements located a distance apart from each other. And while theirs have always been difficult lives, today, because of the near drought situation, even basic survival has become a major concern for the people of these areas.An official of a large social development organisation which carried out development work in Lyari and the Lakra regions, disclosed that his group established 12 water supply schemes for the population of these areas, but the projects failed due to the saline nature of the underground water.

“Digging wells and establishing bores is not the solution to the water problem in the coastal belt given the salinity in the water,” he said.There are also a handful of other activists in these areas who try to generate awareness of the problems that exist. Among them is Master Abdul Karim. A government teacher by profession, Karim is a known social activist from Lyari. Coming from an area where there are no mobile signals, he had to travel a fair distance to even have a conversation on his cell phone. He told Newsline that the area where he lives has a population of 2,500 — but there is not even enough water to slake their thirst. “Sometimes we get water from travellers plying the highway, other times from water supply schemes that are fast drying out, and very rarely from the Hingol River,” said Karim.

Expressing his anger, he asked why, in the 21st century, people should be forced to spend the better part of their days worrying about how they would get water to drink for their families. He complained bitterly that the government and its concerned Public Health Engineering (PHE) department had done nothing to address the water shortage, particularly in the more remote areas of Lyari.Tanveer Rahim, the Sub-Divisional Officer (SDO) of the PHE, is one of the officials responsible for providing water to Lyari and Lakra.

When asked what his department is doing to find a solution to the chronic water problem, he answered, albeit with some hesitation, that, “We are supplying water in 10-14 water tankers to the affected people on a daily basis.” However, he admitted the tankers only supply water to the area up to the Lyari town limits, not to the population settlements beyond. “At the moment we have no water supply mechanism for areas on the coastal highway from Lyari to Hingol, but we are planning to create one in the near future,” he said. 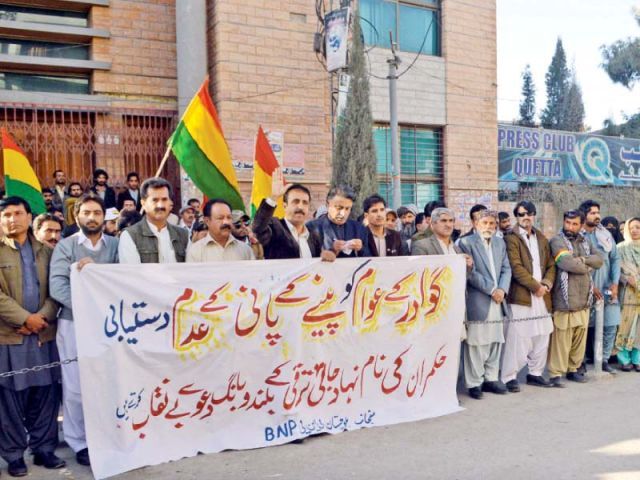 Both Lyari and Lakra fall under the PB-45 constituency of the Balochistan Assembly, which has always been a stronghold of the Bhootanis of Dureji. From 2002 to 2013, Aslam Bhootani served as member of the Balochistan Assembly from this constituency. In his first tenure he was the deputy speaker, and in the second, he served as the speaker of the Balochistan Assembly. Bhootani told Newsline that the basic problem of the area is that there is no drinkable ground water. “The cost of pumping water to Lyari and Lakra via a pipeline all the way from Uthal is not economically feasible,” he maintained. Bhootani said that based on consultations with the local people, his people provided 18 tankers and water bowsers to villages, starting from Lyari to Ras Malan.

“The community members told us they would maintain the water tankers at their own expense and use them to transport water from the Hingol River,” he maintained. Conceding that this was not a permanent solution to the problem, Bhootani said what was needed was the creation of a dam — the Hingol Dam. “This dam would not only provide suf-ficient drinking water for the people of the area, but also irrigate 70,000 acres of land,” he claimed. However, he accepted that the construction of the Hingol dam offered its own challenges. Bhootani explained that the original site proposed for the dam would have drowned the historical Nani Mandir, also known as the Hinglaj Mata Temple. “So a new site was proposed for the dam in the Hingol National Park,” he disclosed, adding, “but unfortunately, the current nationalist government has handed over that land to SUPARCO for missile testing.” Usually the land of a national park would never be allotted for missile testing, but the incumbent government amended the Wildlife Act to pave the way for this outrage. Now we can never build the Hingol dam.

”Offering an alternate solution, the official of a social development organisation suggested the construction of five or six small delay action dams in the affected areas for the storage of rainwater. Abdul Karim seconds this suggestion. “It would only cost the government Rs. three million to build one such dam. It’s not too much to ask,” he maintained.The question is, will those in the corridors of power in Quetta and Islamabad listen to the cries of the likes of Master Abdul Karim from far-flung Balochistan? If history is any indicator, the chances are dim.