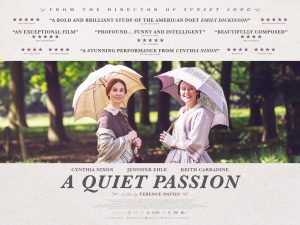 About halfway through A Quiet Passion, Emily Dickinson (Cynthia Nixon) gives Reverend Wadsworth (Eric Loren), a man she both admires and loves, a handwritten book of her poems to read. Excited but anxious, Dickinson waits for his opinion, hoping for approval and praise, even as she fears rejection. As the pastor reads the poems, the camera pans to Nixon’s face, who conveys the multitude of emotions Dickinson is experiencing while she awaits the verdict, so convincingly, that it is hard to believe this is play-acting. Terence Davies’ A Quiet Passion merits a viewing or even two — for this powerful scene alone. Fortunately, the film has a lot more to offer than just one effective scene. A masterpiece of filmmaking, it is, in fact, one of the finest films to have come out of the United Kingdom in years.

The biopic of Emily Dickinson, one of America’s two most important poets, begins in the 19th century when, after a short and turbulent stay, a young Dickinson (Emma Bell) is leaving the Mount Holyoke Female Seminary to return to her family home in Amherst, Massachusetts. The Dickinson home, although somewhat austere, is happy and warm. It is inhabited by the poet’s religious but liberal-minded father, Edward Dickinson (Keith Carradine), a doting sister, Lavinia Dickinson (Jennifer Ehle), an aloof and distant mother, Emily Norcross Dickinson (Joanna Bacon) and a disdainful, if loving, brother, Austin Dickinson (Duncan Duff). Emily is happy in the warmth of her home, where religious devotion and intellectual freedom exist in unlikely harmony. She finds solace and comfort in the company of friends and family. The Dickinsons love to explore the power and effect of words and enjoy drawing-room banter and repartÃ©e. However, the mood in the household, along with that of the film, turns darker as time passes and Dickinson faces death, the departure of friends, illness, betrayal and disappointment. As she grows older, Emily’s winning rebelliousness turns to angry bitterness and she finds her largely self-imposed loneliness unbearable and agonising. In a scene reminiscent of the death of Agnes (Harriet Andersson) in Ingmar Bergman’s Cries and Whispers, she gives in to Bright’s disease, and is carried to her open grave, while ‘Farewell’ is read in a voiceover.

The conventions of a biopic, of which historical accuracy is a cornerstone, can sometimes rob it of the idiosyncrasy so necessary to depict the lives of subjects as peculiar as Emily Dickinson. Davies approaches his subject much the same way as the poet did hers — with fierce independence and a uniquely personal style, celebrating its idiosyncratic and unusual elements.

Intensely aware of the brief, fragile and fickle nature of life, Dickinson often contemplates death, a prospect she finds both menacing and comforting. Dejected and ill, Dickinson becomes progressively reclusive with age. She stops leaving her homestead at the age of 25, and eventually stops speaking to visitors face to face, preferring to have conversations from positions that do not allow for eye contact. She also rejects the religious dogma which was thrust upon her through her life, coming to believe that religion is essentially a cruel instrument of control. And she challenges patriarchy while obsessesing about the survival of her work.

The root of Emily’s misery, however, is the conflict between her desire to remain single and enjoy the freedom and independence spinsterhood allows her, and her craving for the love, validation and sense of accomplishment that marriage can afford. A Quiet Passion takes time to explore this conflict with intelligence and sensitivity.

Most of the film is set inside the home to which Dickinson confines herself. Cinematographer Florian Hoffmeister films the home with great skill, perfectly capturing its mood and atmosphere. And Davies’ screenplay depicts the misery of genius in acute, agonising detail. His is not a conventional biopic of a troubled but brilliant mind; it is a serious examination of one of the most brilliant minds of the 19th century.

Each and every actor in A Quiet Passion is remarkable, but Nixon’s performance, as a lady out of step with the times in which she lived, is truly spectacular. She sinks into the role of Emily Dickinson, and watching her capture the essence of the protagonist in each scene is sheer pleasure. Nixon’s blistering performance is undoubtedly the film’s greatest strength.