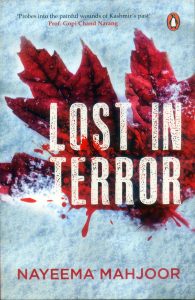 Is Azadi (freedom) worth the price? That question goes beyond the rhetorical to the real-life issues facing Kashmiris, particularly women, in Indian-held Kashmir.

Lost in Terror is loosely based on the life and profession of the author, Nayeema Mahjoor (daughter-in-law of the famous Kashmiri poet, Peerzada Ghulam Ahmad Mehjoor), who, like the lead female character in the book, worked as a broadcaster in Kashmir, and later, for nearly two decades, at the BBC World Service (Urdu) in the UK. The story is written from the perspective of a well-educated, working, married woman living in Srinagar with her in-laws and a bevy of married sisters, also living there, who meet daily, and secretly, for lunch with their father (Baba), who lives alone in an old house near Dal Lake (as did Majhoor’s father who passed away in January this year). Baba is ostracised by the whole family since he insisted on educating his daughters — a shameful thing.

The sisters gossip, discuss their day -to -day issues, as well as checking up on Baba. Or they did until that fateful day in September 1988 when the house of the Deputy Inspector General of Police is attacked by a gunman in Rajbagh, Srinagar. The gunman was killed. This was the trigger for the eruption of the armed movement that led to mass processions and demonstrations across the Kashmir Valley. The protagonist (whose name we never get to know) is blissfully unaware of this event, although it takes place close to her home, as she makes her way to Baba’s from the radio station where she works.

This day sets in motion the unravelling of the lifestyle they have been enjoying so far. The sisters get a taste of the turmoil to come as they leave for their homes after lunch that day. And from then on, it seems to be a downward spiral on all fronts — security, family relationships, a struggle for basic daily existence. The story line starts from 1988 till the mid-1990s and is fairly convoluted. This is partly due to the fact that Mahjoor has tried to weave too many strands into what is, undeniably, a hugely important, but deliberately neglected, international dispute issue: the plight of the Muslim majority population in Jammu and Kashmir (the book focuses on the Valley).

Bringing in issues of gender discrimination, the subjugation of Indian Muslim women in Kashmir, their denial of a right to education or to make life decisions by conservative families and related expectations, clouds the issue of Azadi and makes it an amalgam of many contradictory factors. Comparing political Azadi to Azadi for women in the domestic sphere, the narrator wonders, somewhat sarcastically, whether when, and if, the mythical Azadi should ever be forthcoming, will Kashmiri women derive the same benefits from it as the men? These are grey areas that are touched upon, but never fully explored.

Lost in Terror, though classified as fiction, is based on historical facts about the Kashmiri people’s struggle for Azadi. And it started long before 1947. As the author points out, “the Kashmiris consider the great Mughal, King Akbar, the first ‘oppressor’ in Kashmir’s history, referring to him as ‘Akbar the Deceitful.’” Due to unrest in the valley, Akbar had invited the then ruler of Kashmir, Yusuf Shah Chak, for negotiations to Delhi, in the late 16th century. However, instead of negotiating, Akbar had Yusuf Shah imprisoned (he later died in captivity), and brought Kashmir into the ambit of the Mughal empire. “It was from that time that the subjugation of Kashmir began — when the kingdom of Kashmir was lost due to the manipulation and treachery of the Mughal king.” Later, there is mention of Kashmir being sold by Maharaja Gulab Singh in 1946 to the colonial powers for 75 lakh rupees. There are many unanswered questions: why did Sheikh Abdullah sign the Delhi Agreement, acceding to India, despite the majority desire to merge with Pakistan? Why was the Sheikh then arrested in 1953? The two factions, the Shers (the followers of Sheikh Abdullah) and the Bakras (who owe allegiance to Mirwaiz Farooq who wished to join Pakistan), remain deadly enemies to this day. While the purpose of the book is more than the sum of the story, it could have done with a bit of editing. The many awkward phrases and simple grammatical oversights are distracting and unnecessary.

What is more difficult to comprehend, though, is the relationship of the narrator, the main breadwinner, and her husband, Asad. A successful entrepreneur pre-September 1988, Asad seems to become a changed person overnight. He gives up on his work, on his wife, on normal life, to become a sympathiser of the Azadi cause, providing shelter and food to strangers, asking his wife to cook at strange hours by candlelight for these ‘visitors’ so that suspicion is not roused, and putting his family at risk. And when his wife conceives, after seven years of marriage, he sends her to her father’s house as he says the room is needed for ‘others’ (militants) taking refuge in their house.

Baba’s house is not far. However, even though she gives birth to a son — “the most important thing a woman can do” — Asad does not deign to visit the wife or son, neither does anyone from the family, till two years later, by which time Muna can walk and talk. And then, in a completely bizarre turn of events, she is sent home with her son in a taxi by her aged father, who says he can no longer take the responsibility of looking after her, and she returns to a grand, ceremonial welcome at her in-laws as though the events of the last few years never happened. Parts of the story are surreal; timelines don’t follow a logical pattern, so the reader is frequently caught off-guard in the flow of the narrative.

However, the underlying theme of violence — on the political and on the domestic front — is a constant. Bunkers are set up in every locality by security forces, who conduct unannounced ‘search and crackdown’ operations. Murder, rape, kidnapping, torture, these are everyday occurrences and related in a matter of fact manner. ‘Search’ operations means armed personnel entering even private residences at will: nothing is private, nothing is sacrosanct; trawling through personal possessions; separating men and boys on suspicion of being militants, taking them for interrogation, and often returning mutilated corpses. Added to this are electricity outages, curfews, strike calls, disconnection of telephones and internet, schools shut down and most offices with little to no attendance as 80 per cent of the workforce were Kashmiri pandits who have left the valley. Near famine conditions prevail often, as supplies run short due to curfews and road closures.

More than routes are sealed off. Acknowledged as paradise on earth, the beauty of the Kashmir setting is hardly mentioned. Residents are forced to keep doors and windows shut at all times, summer or winter, cut off from each other due to lack of communication and fear, all joy leached out of their lives, leaving only a constant exhaustion and sense of humiliation; the surrounding beauty does not seep into the souls of its inhabitants. This book ends in the mid-1990s. It is probably as bad, if not worse, now.

According to the narrator, the women in Indian-held Kashmir are caught in a three-way crossfire — from atrocities by the security forces, from oppression and subjugation within the domestic sphere, and perhaps, worst of all, from the threat to their honour and safety posed by the Ikhwanis or ‘renegades’ — those militants (“one of us”) who, after their arrest, are recruited by the government as informers with a licence “for loot, plunder and hooliganism.” Additionally, the women try desperately to maintain a semblance of normalcy; they have to cope with running a house, raise children, try and protect themselves and loved ones, grieve over the lost and the missing.

When the narrator’s beloved teacher and mentor’s Hindu husband, who heads the radio station, is murdered by militants, she is more shocked by it than all the other atrocities she has witnessed so far, including seeing her aged father humiliated by the security forces. She feels personally responsible: “my Azadi destroyed her home, her future and (that of) her children. I never dreamt my Azadi would be soaked in blood and destruction.” And she voices her ambivalence: “Were independence and accession not two different ideologies — poles apart? It created confusion in my mind as it had always created amongst our people. We were not taught the difference between Azadi and accession.” And that, perhaps, is the crux of the issue.

Towards the end of the book, the narrator, like her creator, gets an unexpected job offer at the BBC and flies out to London, alone, to start a new journey, with the hope that she will return home to a better tomorrow.

Perhaps it is the same resilience that brought back Mahjoor to Kashmir after 20 years at the BBC in the UK. Although she was booked in June 2011 by police under the now-repealed Section 66(A) IT Act for allegedly inciting violence in Kashmir through a Facebook post, the case was not admitted by the court. Upon her return to Kashmir, Mahjoor joined the Mehbooba Mufti Peoples Democratic Party, which is the BJP’s coalition partners in the Jammu and Kashmir (J&K) government. In June 2015, the J&K government appointed Mahjoor as chairperson of the State Commission for Women . So the author has come full circle. However, the question of whether things will ever change for the women of Kashmir, Azadi or otherwise, remains unanswered.