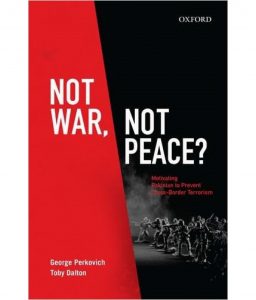 In the aftermath of the September 18, 2016, militant attack in Uri, there was very little Pakistan and India could agree on. Who carried out the attack? Did India conduct retaliatory ‘surgical’ strikes? Would a breach of the Indus Water Treaty constitute an act of war? Are bilateral tensions a way to distract from the Kashmir issue? The only point on which there was a consensus was that the bilateral security paradigm between the two countries had shifted in a new direction.

Not War, Not Peace? Motivating Pakistan to Prevent Cross-Border Terrorism, by George Perkovich and Toby Dalton – both scholars at the Washington DC-based think tank, the Carnegie Endowment for International Peace – is an uncannily timely read exploring the parameters of this new paradigm. The book explores the military, intelligence and diplomatic means at India’s disposal to respond to terrorist attacks on its soil planned by Pakistan-based militants, and ultimately disincentivise Pakistan’s use of ‘asymmetric’ warfare.

Pakistani readers may rankle at the book’s Indian perspective as summarised in the subtitle. The authors work off the premise that militants operating in India are Pakistan-based and have some degree of support from the state (though they emphasise that the level of facilitation is unclear and evolving). The book does not consider Pakistan’s perspective vis-a-vis Indian security and foreign policies or the perceived security threats that drive GHQ’s decision-making – to be fair, that would be a separate project, with a separate premise. Readers who are willing to consider the issue through the India lens will be rewarded with an in-depth and insightful analysis of the predicament that is the bilateral security paradigm.

Perkovich and Dalton begin by laying out the shortcomings of the Indian military and intelligence apparatus, underscoring challenges in India’s development and implementation of a national security strategy, problems with defence procurement, and the failure of civilian politicians to account for military perspectives when considering particular actions. Having laid this groundwork, the book explores five response options available to India, evaluating the effectiveness of each, the likelihood for escalation, and the potential for shifting Pakistan’s security policies.

The options explored are as follows: army-led incursions into Pakistan as outlined in the ‘Cold Start’ doctrine; limited airborne operations or ‘precision strikes’ against militant groups; a ‘symmetrical’ response comprising India’s use of covert actions to foment insurgency within Pakistan; innovations in India’s nuclear policy to support any military actions and enhancing nuclear capabilities without increasing the risk of Pakistani retaliation; and a strategy of “non-violent compellence” that would seek to isolate and punish Pakistan on political, economic and moral grounds – in other words, the isolation approach the Indian government has sought to deploy after Uri. Each chapter methodically considers all the possible Pakistani responses to Indian actions, developing scenarios and identifying routes toward escalation, including nuclear exchanges.

The authors’ scenario development highlights Delhi’s key predicament – owing to the plausible deniability of militant activity, any Indian response to a terrorist attack allows Islamabad to frame Delhi as the aggressor, thereby justifying in theory an escalation in the counter-response (Interestingly, this is not what happened post-Uri). In other words, India has to carefully calibrate its responses to initial militant provocations recognising that action could rapidly lead to military escalation. The book also makes the point that the overall cost to India of militant attacks – even those as brutal as the Mumbai attacks – is ultimately smaller than the potential cost of a full-blown escalation, including nuclear warfare.

Drawing on broad research, parallels between the India-Pakistan and Israel-Palestine dynamics, and extensive interviews with members of India’s intelligence agencies and security forces – as well as key conversations with members of Pakistan’s security establishment – the book highlights some essential facts: there is a dearth of intelligence on the Indian side not only about Pakistan’s military planning but also about the very militant groups it seeks to eliminate. This lack of intelligence is a major constraint for executing any of the aforementioned options, as are India’s military capabilities (nationalists will enjoy the authors’ assessment that Pakistan has used its comparatively “less ample [military and intelligence] resources with more resolve, purpose, and efficiency”).

The chapter on India’s use of air strikes is particularly interesting in light of Uri. The authors weigh the challenge within India of needing to respond to political pressure to retaliate with potential backlash and escalation. The book asks whether India has sufficient intelligence to target militant camps (the authors suggest it does not). Perkovich and Dalton also point out that air strikes against militant camps risk creating martyrs and fuelling militant recruitment, and given that the Pakistani state is not directly responsible for terrorist attacks, strikes would be perceived as aggression, increasing the potential for escalation. The authors describe a March 2013 simulation, involving former senior army and naval officers from both India and Pakistan, which concluded that “a conflict might remain limited if Indian aggression is restricted to one-off airstrikes against terrorist targets situated in the disputed territory of Jammu and Kashmir.” The authors’ interviews with former high-ranking military officials from Pakistan reached the same conclusion. If their analysis is right, Pakistan and India have, post-Uri, already played out the one scenario that does not end with serious military escalation.

The other chapter that will be of interest to Pakistani readers is on the covert operations option. Perkovich and Dalton chart the history of Indian intelligence’s use of covert ops, acknowledging some activity in Balochistan as well. The authors interrogate the strategic utility of these (besides reaching parity at both the sub-conventional and conventional levels), and point out that the reputational damage to India of engaging in such activities would ultimately be counterproductive. While interesting, this chapter suffers the most from not having a Pakistani perspective. How would Pakistan respond to increased levels of covert Indian activity? Would it find itself in the same predicament that the authors portray India to be in? Would the toll on Pakistan of responding to covert ops – in the form of paranoia, censorship, surveillance, and human rights violations in the form of abductions and interrogations in the name of national security provision – be more destructive to the country’s political and social fabric than anything Delhi could orchestrate?

Not War, Not Peace raises many interesting questions, some of which are left unanswered. The main one of these is what, ultimately, is the point of asymmetric warfare? What is the end goal and what does victory constitute other than the mere existence of militant groups? And owing to its Indian perspective, the book also invites an equivalent deconstruction of the Pakistani perspective on the bilateral security paradigm.

Still, the book is a must-read for anyone concerned about the potential for open conflict between Pakistan and India. Perkovich’s and Dalton’s analysis suggests that both sides are operating in uncharted territory, with untested scenarios and a high potential for escalation. Military strategy seems hinged on an elaborate game of ‘chicken,’ to see which side will back down first. This leaves much room for errors of judgement, particularly given the inflamed rhetoric, shrill jingoism and public hysteria that will increasingly accompany cross-border encounters, as demonstrated by media reactions post Uri. That is a terrifying prospect for the nuclear-armed neighbours. One hopes this, and further academic analyses of the predicament, will lead to strategic planning and communication aimed at preventing escalation on both sides of the border.