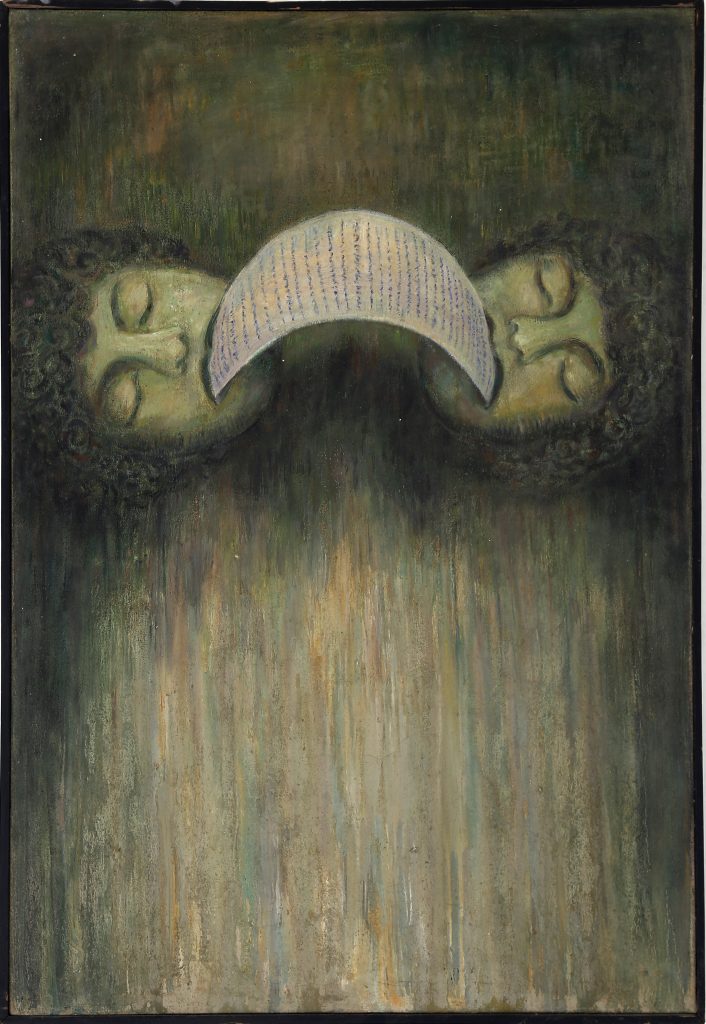 Mansur Salim’s (1958-2015) art was born out of revelation. He used to experience visions through flashes of imagery over which he had little control. Rather, he felt himself to be a conduit for transference of these visions from his mind into paintings. He spoke of an unveiling in which the universe revealed aspects of its essence, a phenomenon that he termed as ‘Kashf.’ Quite possibly, he drew strength to continue painting because of the compelling nature of these insights, even as his body was being debilitated by the onset of Parkinson’s Disease.

In a retrospective of his work titled In Remembrance of Mansur Salim held at Koel Gallery, 16 oil-on-canvas paintings allow the viewer to gain acquaintance with Salim’s unique idiom. The paintings are untitled which makes individual reference to them slightly difficult.

Noorjehan Bilgrami of Koel Gallery recalls Salim’s pioneering work with site-specific installations in Karachi, long before contemporary trends made art installations a common feature of the art landscape in Pakistan. Architectural portraits of old buildings in Karachi were an important phase of his earlier work. 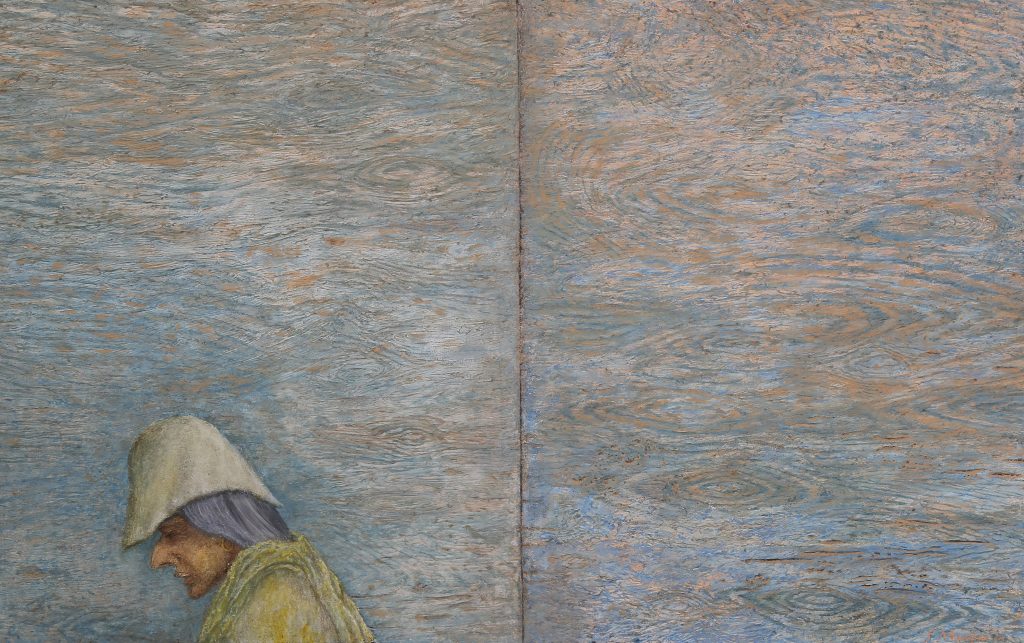 Mansur Salim has been dubbed a surrealist painter and certainly there are aspects of surrealism in his work. This is consistent with the enigmatic source of his inspiration, namely his visionary flashes. The term ‘kashf’ is used in Sufi thought to suggest spiritual knowledge. But Mansur Salim’s visions show a deep interest in structural relationships, and he attributed the source of the flashes as “communications from nature.” His canvases are rarely cluttered. The human figure hardly ever plays a central role in his paintings. Instead, there are strong geometrical associations and a preoccupation with space. Perspective, play on scale and division of the plane are strongly evident. It seems as though he wanted to juxtapose the enormous with the microscopic and, in the process, collapse the difference between the two.

A recurring shape in Mansur’s work is the isosceles triangle. In its permutations seen in various paintings, the triangle occurs as a wedge-shaped bamboo shelter in a crater-like land mass; it assumes a spaceship-like function as it heads towards an asteroid whose craters show up brilliantly against the backlighting. The artist seems to be exploring the laws of nature by drawing equations between space and mass. A paint-box sits on a narrow ledge which is angled on the extreme diagonal. A partial shape of the wedge is created by the strange perspective created in this image. Similarly, a woman’s feet in high heels are shown balancing on a narrow parapet of a high-rise building. The parapet creates a partial triangular wedge, again at a sharp — and vertiginous — diagonal. 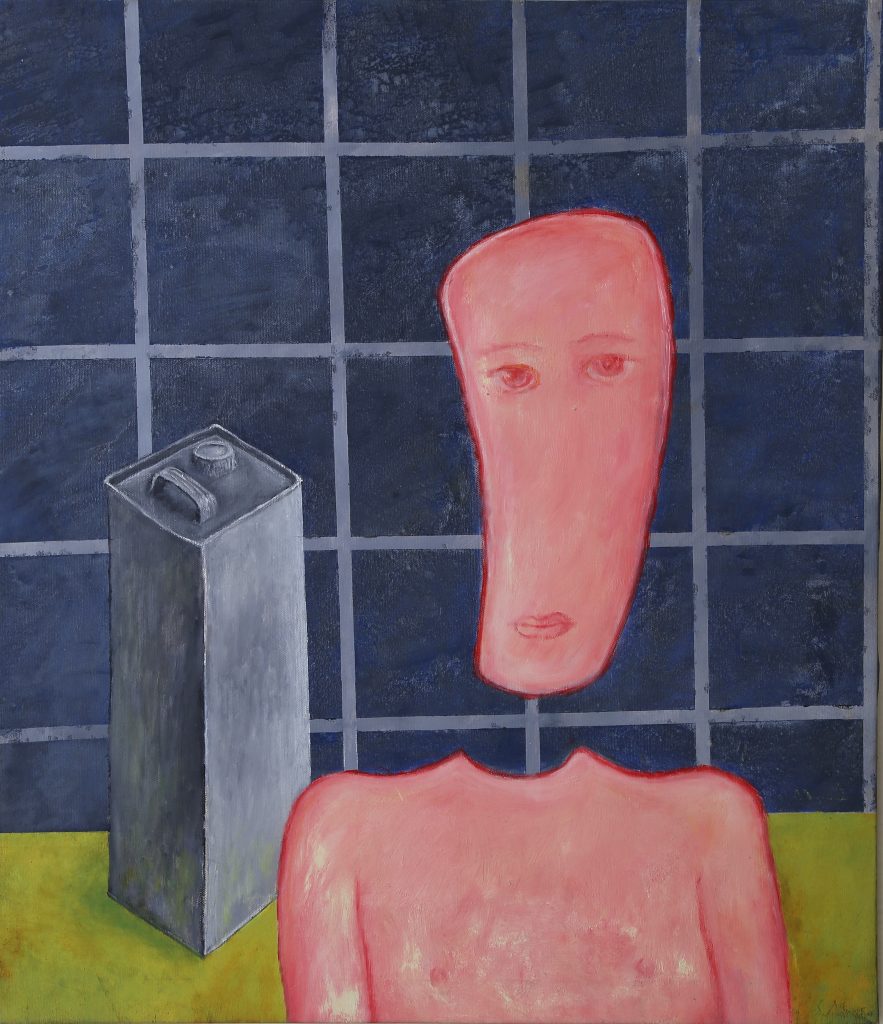 Salim often used the device of dividing space to suggest the occurrence of two different phenomena coexisting concurrently. Several of his paintings depict a porthole of sorts within the frame of the canvas. This “window” resembles an elliptical gap as if a hole has opened in masonry. The creation of parallel worlds, that ordinarily would bear very little connection to one another, has much to do with Salim’s visions of space and time. These depictions are thought experiments which compel us to regard the familiar with a refreshed gaze.

It is tempting to infer the influence of Zahoorul Akhlaq’s ‘Windows (1990s)’ series in Mansur Salim’s handling of space. Akhlaq’s play with structures was strongly driven by an intellectual exploration of the geometrical possibilities. The illusion of a third dimensional view was created by the structural device of creating grids on canvas.

However, in contrast with Akhlaq’s formal investigation, Mansur Salim’s explorations of geometry were never about formalism alone. He did not lean on aspects of the miniature painting tradition. His strong interest in the architectonics of space was intrinsically linked to the enigmatic flashes that presented themselves to his eye, which he then translated into imagery in his paintings. Salim disavowed the need to keep up with contemporary trends in art. His “unveilings” were an adequate source of inspiration. His consciousness became the bridge between the flashes of inspiration and the physical world. This linkage of subjective source and objective environments, as it manifested in unusual depictions of perspective and space in his art, contributed towards the element of surrealism. 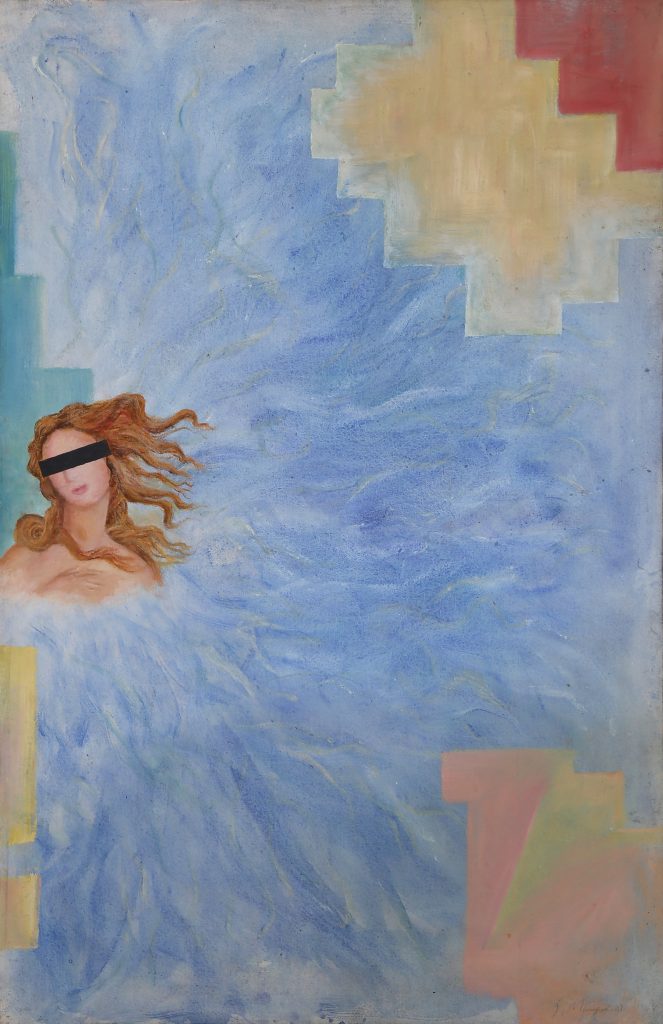 Mansur Salim’s work, whether he was exploring colour, texture or space, was firmly grounded in psychic experience. Salim did not make the mysteries of the subconscious mind the primary focus of the sensory data that he experienced as visions. Rather, he was absorbed in advancing quasi-scientific explanations of worldly phenomena to which he brought a gentle touch of wonderment. The infinite riches of world, which he left too soon, kept him enthralled to the end.