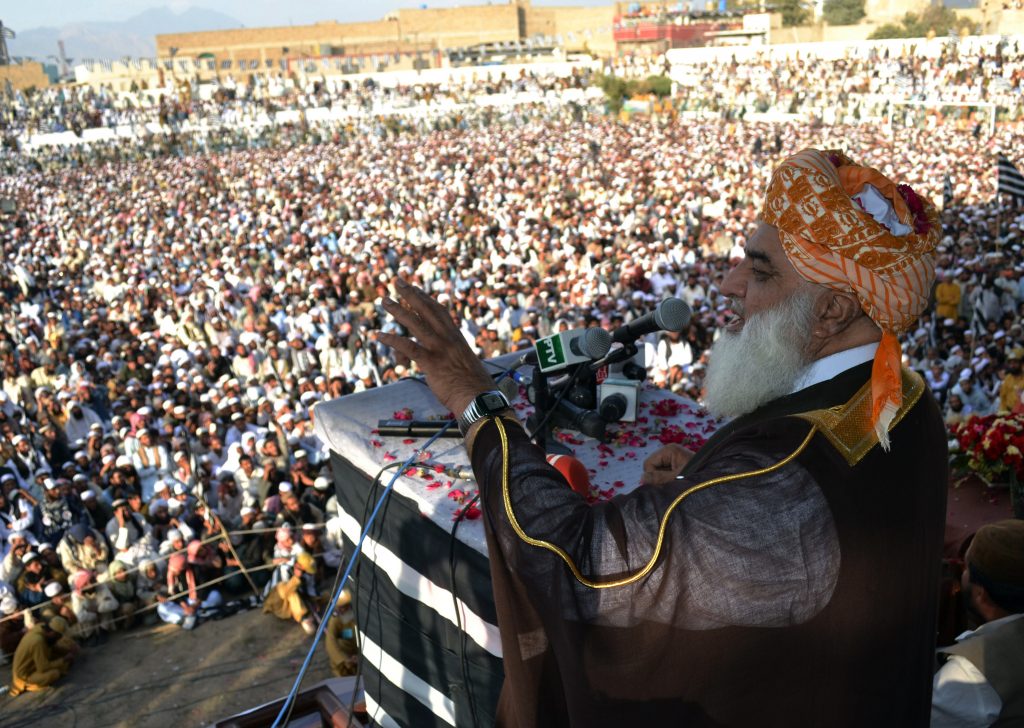 Maulana Fazlur Rehman, the conservative religious cleric who heads a faction of Jamiat Ulema-e-Islam, (JUI-Fazlur Rehman group), a party with a significant presence in most provinces of Pakistan, has the aura of a seasoned politician. He is known for his conservative rightist agenda as much as for his bargaining skills, as he is able to strike deals between political parties irrespective of the so-called ideological divide of left, right, and centre.

The Maulana’s party was an ally of the Pakistan Peoples’ Party (PPP) at the centre and in Balochistan, after the 2008 general elections. He stood behind the Pakistan Muslim League-Nawaz (PML-N) government amid the entire crisis faced at the hands of the Pakistan Tehreek-e-Insaf (PTI). In the upcoming elections, he is weighing his options to form governments in Khyber Pakhtunkhwa (KP) and Balochistan. On the Punjab front, where his party does not have a significant presence, he welcomed Masroor Jhangvi, a scion of slain anti-Shia firebrand cleric, Haq Nawaz Jhangvi, to the party fold last year, after Jhangvi was elected as an independent candidate from the Punjab Assembly constituency PP-78. Jhangvi denies any association with sectarian organisations, saying no reasonable person could associate himself with sectarianism.

But his announcement of joining the JUI-F came in a meeting with Fazlur Rehman in the presence of Maulana Ahmed Ludhianvi, chief of the proscribed Ahle Sunnat Wal Jamaat (ASWJ). It seems the ASWJ, which is battling its way back to mainstream politics, may choose to ally itself with the JUI-F, if it doesn’t meet with success on its own.

Meanwhile, Karachi mayor Waseem Akhtar of the Muttahida Qaumi Movement-Pakistan (MQM-P) has vowed to sweep the upcoming elections in all districts of Sindh by forging an alliance with the JUI-F, against the ruling PPP. It has already been pointed out by analysts that the ruling PPP has no political opposition left in Sindh, after most prominent members of the Pakistan Muslim League-Functional (PML-F) jumped ship to join the PPP. The vacuum created by the decimation of PML-F, and the limited interest of the mainstream parties, PML-N and PTI, in Sindh have created room for the JUI-F which is emerging as a significant political force in the province.

Last year, in the Shikarpur by-elections, the JUI-F managed to draw support from Sindhi nationalist groups, and an influential Shia family of the area against the PPP. The alliance against the PPP, led by the JUI-F, was a significant development, although it could not win the elections. The JUI-F Sindh leadership, scions of the slain leader Khalid Mehmood Soomro, have influence among Sindhi nationalists owing to the pro-nationalist stance Soomro takes vis-Ã -vis the central government, about the construction of dams, distribution of irrigation water, and share in revenues. But getting support from the nationalist groups while forging an alliance with the MQM may put Fazlur Rehman’s deal-making skills to the test. In the past, Rehman faced resistance from the Sindh leadership when he visited Nine Zero in 2015, on behalf of the federal government, in a bid to negotiate with the MQM leadership, after their lawmakers had submitted their resignations from the assemblies to protest against the alleged excesses of law enforcement agencies in Karachi.

Now, a desperate bid to oppose the PPP in Sindh could bring the adversaries under the JUI-F flag. If the PML-N leadership in the wake of signs of renewed interest in Sindh, including two recent visits by Prime Minister Nawaz Sharif, brings a few electable politicians on board, this could pave the way for a broader anti-PPP alliance where JUI-F, PML-N, and MQM-P would be the major partners. It could draw support from other groups and the remnants of the PML-F as well.

In Balochistan, the JUI-F was part of the notorious Aslam Raisani government. It was willing to join the PML-N government after securing six provincial assembly seats, but the PML-N formed a coalition government with the National Party Pakistan (NPP) and Pakhtunkhwa Milli Awami Party (PkMAP), who opposed the inclusion of the JUI-F, so it ended up on the opposition benches. In the changed political scenario, when differences between the PML-N Balochistan and the NPP are emerging, the JUI-F is drawing closer to the PML-N Balochistan leadership, which could culminate in an alliance to edge out the nationalists.

In KP, where the JUI-F chose to hold its centenary celebrations, aiming to reap benefits from a massive show of strength, it eyes a lion’s share in the upcoming set-up after general elections next year. In the last general elections, it posed fierce opposition to the PTI, which resulted in the use of unsavoury language by leaders of the two parties against each other. In the 2013 elections, when the PTI emerged as the largest party, the JUI-F still wanted to form the government by putting together all the other parties, but failed to get support from the PML-N. Now, capitalising on its conservative support base in the province, the party wants to bag more seats, to be able to form the government with little aid from its allies.

Amidst its bids to enter the corridors of power and exercise significant influence over the lawmaking process at the centre and the provinces, the party resorts to pragmatic choices, weighs its options and forges alliances of convenience.

It has a history of doing so since its inception. Its mother party, the Jamiatul Ulema-e-Hind (JUH), was established in 1919, after the utter failure of the utopian plan to get India freed from the clutches of the British Raj with the support of the Ottoman Caliphate and the Afghan government. The whole plan fell flat on its face with the decimation of the Ottoman Caliphate, and the lack of involvement of the Afghan emir, Amanullah Khan, who got internal autonomy from the Raj after a limited war. When JUH was formed, its founder, Mehmoodul Hasan, the most prominent Deobandi cleric of the time, who had returned to India after spending a couple of years in imprisonment in Malta, shunned armed resistance maintaining that only political struggle could lead to the independence of India. In later years, the JUH remained a religio-political force, and had alliances with the Indian National Congress (INC) and the All-India Muslim League (AIML) at different times.

The JUH remained true to its conservative religious agenda and sectarian identity. It was at the forefront of opposing any legislation under the British Raj that went against their understanding of Islam. When the Child Marriage Restraint Act 1929 was brought forward for approval, with Quaid-e-Azam Muhammad Ali Jinnah as one of its most vocal supporters, the Ulema created a furore against the law, terming it against Islam. When they could not back up this argument, they opposed it under the pretext that only a sovereign Muslim state could enact such legislation. After independence, the JUH in India limited its role to that of a religious party with no active role in politics, but kept on resisting changes to regressive practices, such as the practice of announcing triple Talaq simultaneously and this remains a contentious issue among Muslims in India.

In Pakistan, their successors, different factions of the JUI, whether members of the assemblies, or of the Council of Islamic Ideology (CII), are not willing to step back an inch from their conservative religious stance, and draw political support from the masses through their support of retrogressive practices.

In the recent past, this stance was visible in their opposition to madrassah reforms, laws against forced conversion, the crime of honour killing, and the practice of using blasphemy laws in settling personal scores. The JUI-F and its demagogue leader, Rehman, flanked by other ulema, declared all attempts at reform a conspiracy by the liberals and secular lobby against the ideological basis of the state. The JUI-F, whose predecessors opposed Partition while citing religious arguments, has, over the years, appointed itself the guardian of the ideological boundaries of the same state whose birth it opposed.

It seems that the JUI-F is ready to forge alliances with whoever it can, whether the PPP, the Sindhi nationalists, the MQM-P, or the PML-N in the pursuit of power, while it remains committed to the pursuit of its own version of a conservative religious agenda.